The designer duo, Abu Jani and Sandeep Khosla, takes us on a trip down the memory lane with some unseen pictures from Shweta Bachchan Nanda and Nikhil Nanda’s wedding album. 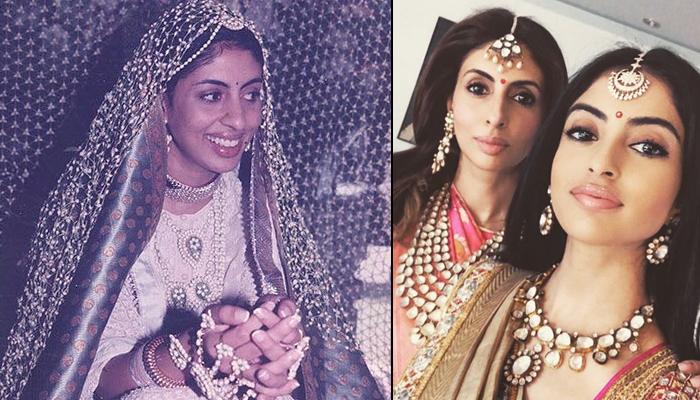 Not every bride dreams to wear red or bright colours on her wedding functions. Nowadays, brides have moved on from the quintessential traditional red and defying the stereotypes, have flaunted the colour white on their pre-wedding ceremonies. In 2018, Sonam Kapoor had married the ‘man’ of her dreams, Anand Ahuja, and apart from the love, glam and glitz at #SonamKiShaadi, we all remember how the then-bride-to-be had raised the fashion quotient in her ivory-coloured lehenga on her mehendi. (Also Read: This Bride Wore A Sabyasachi Lehenga That Will Remind You Of Deepika Padukone's Wedding Ensemble)

But if you thought that it was Sonam Kapoor Ahuja who had changed the definition of pre-wedding outfits’ colours by flaunting shades of white on one of her wedding functions, then you’re wrong! The designer who had made Sonam’s masterpiece mehendi lehenga, Abu Jani and Sandeep Khosla, had also made a path-breaking statement 22 years ago with their another breathtakingly beautiful ensemble. And the bride, who had opted for the unconventional bridal colour for her mehendi and sangeet ceremony is none other than the ever-so-gorgeous, Shweta Bachchan Nanda! 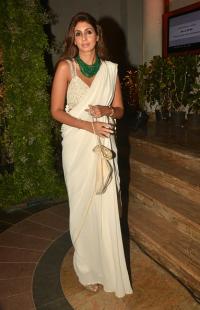 Shweta Bachchan, daughter of Amitabh Bachchan and Jaya Bachchan, had walked down the aisle with Nikhil Nanda, the Escorts Group businessman, on February 16, 1997. The designer duo, Abu Jani and Sandeep Khosla took us on a trip down the memory lane with some unseen pictures from Shweta and Nikhil’s wedding album. To mark 33 years of AJSK, the designer duo treated their fans with some priceless gems from the Bachchan clan’s family album and we couldn’t thank them more for this! 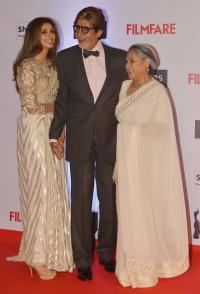 To begin with, Abu Jani and Sandeep Khosla posted a picture of an all-smiles bride, Shweta Bachchan, from her mehendi ceremony. Along with the picture, they wrote, “1997: The Bride wore White! Shweta Bachchan exudes pristine grace in a spectacular floral veil and ornaments at her mehendi dressed in exquisitely intricate chikankari. A pathbreaking ensemble which made the statement that white is absolutely auspicious. @shwetabachchan #33YearsOfAJSK.” 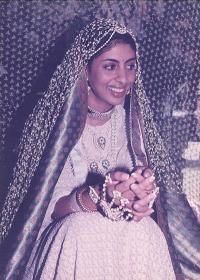 Next is the sangeet ceremony photographs and the first one has the brother-sister duo, Abhishek Bachchan and Shweta Bachchan making their way to the function, twinning in white-coloured outfits. The next one from the sangeet lot has the then-soon-to-be-married couple, Shweta and Nikhil, shaking their leg and dancing their way to their ‘happily ever after’. The last one is the group picture with everyone on-stage and with its magnificence, we can decipher how grand the ceremony was!

Captioning the same, AJSK wrote, “1997: A heartfelt thank you to Mrs Jaya Bachchan for sharing these pictures from Shweta and Nikhil's Sangeet with us. Their wedding was the first ever event done by Abu Jani Sandeep Khosla and the duo handled everything from decor to ensembles for each function for the entire Bachchan family. The Sangeet was an ode to Tradition at it's glorious best. And the ensembles a tribute to classical elegance and masterful craftsmanship. Shweta Bachchan wore a sumptuous gold brocade khinkhaab ghagra with gold zardozi vasli in a leafy tendril pattern. "It was a huge honour to have Mr and Mrs Bachchan entrust us with such an important occasion in the family. That they also gave us complete creative freedom was priceless. It allowed us to dream and execute to our hearts' content and bring to life an absolute fantasy“ - Abu and Sandeep @shwetabachchan @bachchan @nikhil_nanda  #33YearsOfAJSK.” 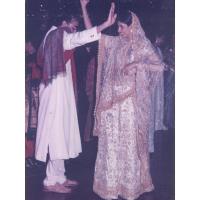 For the Bengali wedding of Shweta Bachchan and Nikhil Nanda, Abu Jani and Sandeep Khosla expressed their relationship with the family and how special the Bachchan clan is to them. AJSK penned down some heartfelt words which could be read as, “1997: More from the spectacular wedding of Shweta Bachchan and Nikhil Nanda! "Jaya is like our sister and we are like Shweta's mamas. We've known her and Abhishek since they were in their early teens, so doing this wedding went beyond work for us and it will always hold a very special place in our hearts "Nikhil and his family were very close to us and our first interiors project was redecorating their home. So, this wedding meant a lot to us. It was the first event we ever got to design from end to end. We had a great time. It was a fantastic creative and emotional experience!"- Abu & Sandeep.” (Also Read: From Nusrat Jahan To Asin Thottkumal, These Celeb White Weddings Look Straight Out Of A Fairytale) 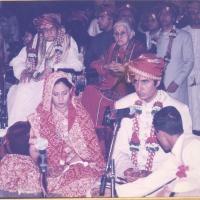 Elaborating on the details of then-bride, Shweta Bachchan and her mother, Jaya Bachchan’s ensembles, the designer duo added, “The duo channeled their devotion to detail into every aspect of the fabulous arrangements. Both the couture and the decor reflected the magic of their maximalist philosophy. For the wedding ceremony, they created ensembles that were a celebration of regal grace and handcrafted embroideries. Shweta Bachchan wore a velvet ghagra and blouse in maroon. Tiny booties embroidered in resham, badla and crystals filled the lehenga. A French net dupatta with a floral border completed this deliciously romantic ensemble. And for the mother of the bride, Jaya Bachchan, an exquisite red bandhini ghagra sari with lavish floral zardozi embroidery. @shwetabachchan @nikhil_nanda @amitabhbachchan @bachchan #33YearsOfAJSK.” 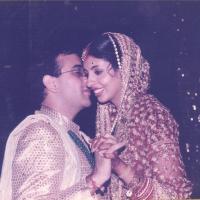 It’s not done yet! Though the wedding ceremonies are over and AJSK along with Shweta Bachchan had successfully broken the tradition by making white the epitome of bridal elegance, but in a photoshoot done four days before she gave birth to her daughter, Navya Naveli Nanda, they had again proved that white exudes royalty. In the beautiful portrait of the mother-daughter duo, Jaya Bachchan and Shweta Bachchan Nanda, twinning in white ensembles, we can see the uncanny resemblance of Shweta with her daughter, Navya. Shweta tagged her daughter, Navya on the post, and her reaction was quite epic. Check out the screenshot here:

The caption of the AJSK post stated, “1997: Abu Jani Sandeep Khosla designed their first ever wedding and created a new standard for celebration. For the wedding itself they broke with tradition and made white the epitome of bridal elegance! The duo dressed Shweta Bachchan Nanda in a delicate, white Chikan ensemble. Crafted in real silver and antique gota borders with Zardozi embroidery at the hem, the dress exquisitely complemented the bride’s fragile beauty. Seen with her is Jaya Bachchan wearing an entirely embroidered saree featuring Chikan jaali work in the Tagar flower motif. On her big day, Shweta mesmerized in a veil made of real flowers to complement her mother’s saree. This photograph was clicked four days before she gave birth to her daughter, Navya Naveli. @shwetabachchan @navyananda Photography: @ashok.salian #33YearsOfAJSK.” (Also Read: Navya Nanda Wore A Similar Lehenga As Sonam Kapoor, At Akash Ambani-Shloka Mehta's Pre-Wedding Bash) 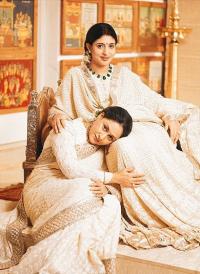 Thank you, Abu Jani-Sandeep Khosla, for taking us on this beautiful trip down the memory lane!