Men are acing their role as 'papa bear' and Tusshar Kapoor is a perfect example of it. Scroll down to see how the actor teaches his son a unique kind of painting! 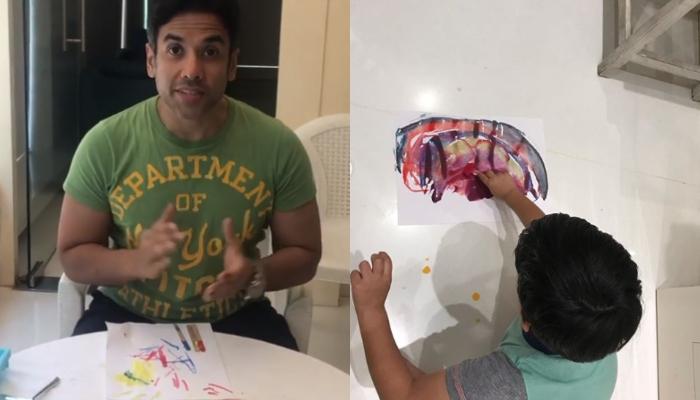 Gone are the days, when fathers knew nothing about their kids. They only cared about their children's grades and always showed their strong demeanour to them. Nowadays, men have turned into 'daddy cool' and they are leaving no opportunity in winning their kids' hearts. They have taken their role of 'papa bear' seriously and they are giving tough competition to the mommies out there. And a lot of credit goes to the single daddy of B-town, Tusshar Kapoor. (Recommend Read: Janhvi Kapoor's Reply To Salman Khan's Question 'Marriages Are Made In Heaven?' Is Winning Hearts)

Tusshar had made headlines and raised quite eyebrows when he had embraced the journey of fatherhood and chosen to become a single daddy to a cute munchkin. It was on June 1, 2016, when the actor had gotten blessed with his baby boy, who he lovingly named, Laksshya Kapoor. He had taken the journey of fatherhood singlehandedly and had inspired many of us with his parental skills and proved to the world that he is an amazing father.

Currently, we all are locked inside our homes due to COVID-19 outbreak. However, in these times, Tusshar Kapoor is making sure to teach new things to his son, Laksshya Kapoor. On April 21, 2020, he took to his Instagram handle and shared a couple of videos, wherein, we can see him teaching a unique kind of painting to his son, Laksshya and it is called an ice-cube painting. We loved how Laksshya enjoyed the activity. He captioned his post as "#Icecube painting at home! Since we are at it might as well share it, hope you like it! #happylearning #homeschoolingmama #rainbow." Take a look at it below:

In an interview with MensXP, Tusshar had opened up on his fatherhood journey and had shared, "I always wanted to be a father that was my first inspiration. It was something that came from within. Then, I met filmmaker Prakash Jha on the trip to Tirupati. On that car journey on my way back from Chennai, we spoke about this idea of becoming a single father and how it is possible. He enlightened me about the process. I took a few weeks, and thought about it. Introspected and made a firm decision to never turn back and fulfil my dream of being a single father." (Also Read: Karan Johar's Kids, Yash And Roohi Johar Are Diet-Policing Him, Barred Him From Eating A Burger)

He had further stated, "It was entirely my decision. I started the process myself and then informed them about it. They were very supportive of it but it was not their push. It was just moral support, family support, emotional support, they were always there when I needed them. But it was entirely my part, my process, my decision and my journey." He had also shared that his relationship with his son is more of friends and how he the little one takes him to a different world where he can de-stress. (Don't Miss: South Star, Ram Charan Takes The 'Real Man' Challenge, Mops The Floor And Nominates Ranveer Singh)

Well, we love Tusshar's idea of ice-cube painting! What about you?