Karan Johar's Kids, Yash And Roohi Johar Are Diet-Policing Him, Barred Him From Eating A Burger

Karan Johar's Kids, Yash And Roohi Johar Are Diet-Policing Him, Barred Him From Eating A Burger

Yash and Roohi Johar are back yet again and this time Karan's diet is on their radar, as they barred him from eating a burger. Check out the video inside!

Tum aaye toh aaya mujhe yaad, gali me aaj chaand nikla! Not literally, though because one, going out in gali is not allowed due to lockdown, two, we were just expressing how happy we are by the comeback of our favourite little rockstars. Yes, hold your breath ladies and gentlemen, because the internet's favourite muse, Karan Johar's kids are back with a bang. Winning our hearts all over by roasting their father, Karan Johar, Yash and Roohi have made us their ardent fans and we can't control our excitement. (Recommended Read: Inaaya Naumi Kemmu Is An Avid Reader Like Saif Ali Khan And Is Booked For The Week, Soha Gives Proof)

Season one of Karan Johar's roasting by his kids, Yash and Roohi Johar had come to an end as the kids had taken a break. And I can't stress this enough, they were dearly missed. But look alive folks, because they're finally back and our happiness knows no bounds. After waiting for so long, Karan Johar's twins are back with another season of Karan's roasting and we're very excited about it. Let's see what do they have in store for us this time. Are you excited? Then check out all the deets below! On April 21, 2020, Karan Johar took to his Instagram handle to post a video of himself having family lunch with his kids, Yash Johar, Roohi Johar and his mother, Hiroo Johar (and it practically started waterworks in our mouth, you'll know why once you see the video!). In the video, we can see some yummy burgers on the table and the whole family sitting around. Karan then said, "Wow were' eating burgers today, even dada wants to eat!" To which, Yash replied, "No, you'll become fat." A surprised Karan then asked Yash, "I'll become fat? If I eat a burger?" Then he panned the camera towards his mom, Hiroo and asked Yash again, "Are you saying the same thing to Mama as well? Mama, I think he's telling us not to eat the burger because he thinks we'll become fat." Hiroo then asked Yash, "Who'll become fat?" To which, Yash coyly answered dada, then Hiroo said, "No, Mama's fat." Karan then took it upon himself to convince his kids that both of them are healthy and no one is fat. Karan then turns to Roohi and asked, "Roohi what do you think of dada?" To which, she replied, "Nothing!" and a dejected Karan murmurs to himself, "Okay I better go back to my low morale self!" We feel you, Karan, we do! Karan captioned the video as "My diet police betu boy, Yash and baby girl Roohi #lockdownwiththejohars#toodles#season2." Check out the hilarious video here: (Also Read: Tanuj Virwani Learns Cooking From Mother, Rati Agnihotri On Video Calls In Lockdown Amid COVID-19)

After questioning Karan's sartorial choices, mocking him for having an oversized tummy, calling his collection of shades stupid and making fun of his singing and dancing, Yash and Roohi had taken a sabbatical from all the roasting a while back. In the video posted by Karan, Yash and Roohi could be seen walking away, rolling their suitcases, to which Karan had asked them, "Excuse me, where are you going Yash? Where are you going Roohi?" To which Roohi had replied, "I am fed up." Karan had then burst into laughter and said, "You're fed up? And Yash, are you also fed up?" Yash had spoken something which wasn't understandable, but the doting father that Karan is, translated his gibberish into even he's fed up. Karan had then asked both of them, "Are you all leaving the house and running away?" To which, Roohi had replied with a smug smile, "Yeah!" Karan had then said, "Oh God we're gonna miss you, bye." And we all did! Take a look at the video here. (Also Read: Karanvir Bohra Surprises Wife, Teejay Sindhu With A Homemade Cake On Their 13th Anniversary)

Were you also waiting eagerly for Karan's kids, Yash and Roohi to make a comeback? Let us know! 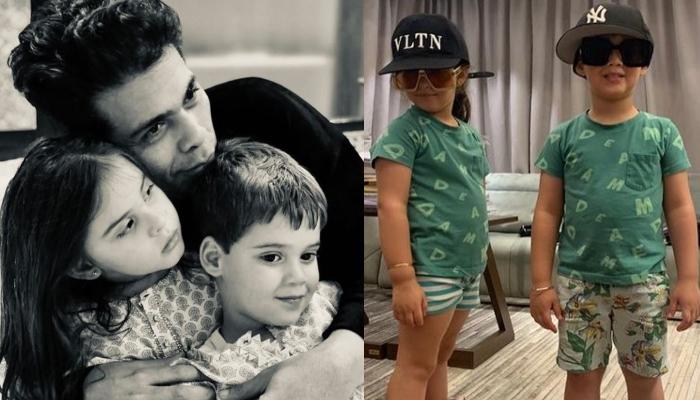 Our nation is obsessed with Bollywood and celebrities. But when it comes to B-town celeb kids, the craziness and love people have for the little ones are on another level. It was in 2017 when Karan Johar was blessed with two adorable twins, Yash Johar and Roohi Johar via surrogacy and