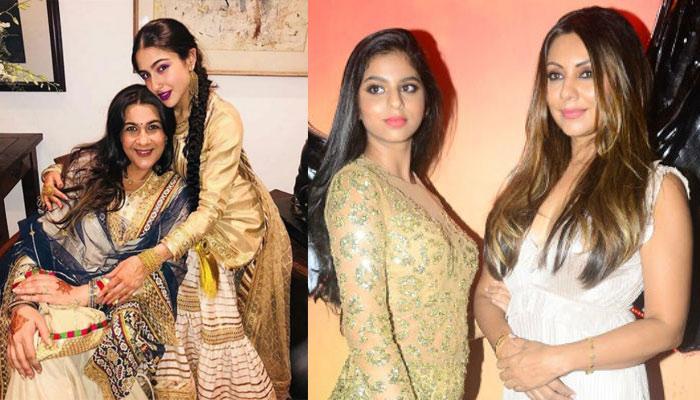 The tinsel town not only has some amazing talent, but also many successful father-son and mother-daughter jodis. Some of them have shared screen space with each other in movies, some in television advertisements, on the ramp shows and others only in print advertisements. Whichever be the medium, together they look ravishing.

And here we get for you 10 of such famous and stunning mother-daughter duos of Bollywood.

Recommended Read: Ekta Kapoor At The Age Of 42 Explains Why She Want To Become A 'Mother' But Never A 'Wife'

One of yesteryear’s most acclaimed actresses, Tanuja is a proud mother of two beautiful daughters Kajol and Tanishaa. While Kajol made it big in the film industry going on to become one of the top actresses of her times, Tanishaa’s luck in the industry did not seem to work. Of late, she is frequently seen doing reality television shows.

Do Read: 13 Things That Cross The Mind Of A Woman Becoming A Mother For The First Time

One of the biggest and most royal family names in Bollywood, the Bachchan mother-daughter duo is without a doubt, the trendsetter in the industry. Though Jaya Bachchan was a successful heroine in her time, Shweta chose not to enter into Bollywood and is married to industrialist, Nikhil Nanda.

Without a doubt, Shweta's parents are a stylish bunch. Read: Stylish Outfit Ideas To Steal From Bollywood Superstar Amitabh Bachchan For The Father Of The Bride

Hema Malini, the Dreamgirl of yesteryears is the proud mother of two beautiful daughters, Esha and Ahaana. While Esha tried her hand at Bollywood and could not leave a mark, Ahaana was never smitten by its charm. They make for a very stylish mother-daughters team, and we must say both of them have inherited their mom's good looks and style sense.

And, how can we not include the Sagar jaisi ankon wali Dimple Kapadia, and our famous ‘Mrs. Funnybones’, aka Twinkle in this list? The two, successful in their own fields are ever-gorgeous, ever-lively and ever-beautiful whenever spotted by the paparazzi.

Also See: 13 Of The Wittiest And Most Whimsical Lines Ever Spoken By Mrs. Funnybones Author Twinkle Khanna

Moon Moon Sen, the gorgeous Bengali beauty and daughter of the famous Bengali actress Suchitra Sen is herself a proud mother to two lovely daughters Raima and Riya. The two have done a lot of Bengali and Hindi films, and Raima also has a few critically acclaimed performances in her kitty.

The gorgeous Babita who left her filmy career to concentrate on her family and marriage gave Bollywood two of its most talented and beautiful heroines, her daughters, Karisma and Kareena Kapoor. Equally successful in their own eras, all three of them are a bundle of talent and beauty.

Another jodi from the Kapoor khaandan is that of Neetu Singh and her daughter Riddhima. Even though her mommy was a huge hit in her days, Riddhima had no interest of coming into Bollywood like her brother Ranbir did. She went on to become a fashion designer and married Delhi-based industrialist, Bharat Sahni.

The royal family of Bollywood in every literal sense possible, this mother and her daughter together spell elegance, charm, perfection and poise. Be it their appearances on ramp shows, weddings, family occasions or brand endorsements, they both always look spectacular.

Daughter of the famous Shatrugun ‘khamosh’ Sinha, Sonakshi became quite a thing in Bollywood right after her first film Dabangg opposite Salman Khan. She is true copy of her mom, Poonam Sinha who also has been a big pillar of support to Sonakshi during her settling-in phase in the industry.

National award-winning director Aparna Sen made sure she passes on all her genes to her daughter, Konkona Sen Sharma. She is a true Indian beauty, a talented actress and now a proud mother.

This mother-daughter jodi of Amrita Singh and Sara Ali Khan is elegance personified. The bold and beautiful Amrita ruled Bollywood in the 80s with her spectacular performances but took a sabbatical after she became a wife and a mother. But, after so many years, the actress is back on the silver screen, doing only selective roles. She is also actively involved in her daughter, Sara’s career. Now, that Sara is a grown up, she is soon going to make her debut opposite Sushant Singh Rajput in Abhishek Kapoor’s Kedarnath. Their style sense is simple, classy and trendsetting.

Shweta Nanda, daughter of Bollywood’s most loved superstar, Amitabh Bachchan has an effortless style sense, just like her mother Jaya. Though she isn’t a part of the Bollywood, her beauty and fashion sense can give any actress a run for her money. Following her beautiful mommy’s fashion sense, Navya Naveli Nanda, Big-B’s granddaughter is already one of the most popular celeb kids on the block with a strong fan following on social media. Navya’s style sense is 11 on 10, totally effortless and dressed to the nines.

She is the queen of Bollywood’s king of romance, and just like SRK, she isn’t a follower, but a trendsetter. Gauri Khan’s fashion sense is high end, royal and glamorous. Just like mommy Gauri, SRK’s little princess, Suhana also knows the art of making heads turn with her stylish appearances, every now and then. No doubt, this mother-daughter duo of Gauri and Suhana is the most effortlessly stylish jodi of the tinsel town!

Recommended Read: Shah Rukh Fell For Gauri At The Age Of 18 And Asked Her For Dance, Which She Turned Down

Lillete Dubey, known for her off-beat roles and excellent acting skills, the senior actress at 64 is aging gracefully. She has an impeccable dress sense that she has beautifully passed on to her daughter, Ira and Neha. Ira is also an actress, best known for her role in Sonam Kapoor-Abhay Deol starer, Aisha. Neha has done a few roles here and there but is a psychotherapist by profession. All three ladies in the Dubey family have great style sense, that is modern and graceful.

Pooja Bedi started her acting career with Jo Jeeta Wo Sikandar. She is an actress, an anchor and also a single mother who is more like a friend to her kids. Pooja is very close to her teenage daughter, Aalia Furniturewalla. Both mother and daughter always dress to impress as their outfits are fashionable and trendy. We love how stunning Aalia looks in almost every outfits of hers. We can’t wait to see her make her Bollywood debut very soon, because she has the X-factor to be a diva.

All these women are true reflections of each other, exceptional in their own field of expertise, and together make one hell of a mother-daughter power duo!

NEXT READ: Single Mother Got Married Again And Her Son Became Her Best Man Be it the simple girl from Piku or that stunningly beautiful beloved Mastaani, Deepika Padukone has been winning hearts on-screen and off-screen with her dashing roles, dimpled smile, and doe-eyed charm. Recently, her deadly and svelte figure has swayed everyone to talk about her. What goes behind maintaining that flawless skin, long tresses, flat