Clad in raincoats and whatnot, check out how Allu Arjun's kids, Arha and Ayaan have prepared themselves for the monsoon! Bollywood and Tollywood celebrities are enjoying their gala family time as the shoots have come to a halt owing to the COVID-19 pandemic. People are spending time with their family and loved ones, and are posting cute pictures of the same on their social media handles. One such name would be the heartthrob of South Indian cinema, Allu Arjun, who is having a fun time with his family and kids, the proof of which we often see on his IG handle. Scroll down to know how Allu Arjun's kids, Arha and Ayaan have prepared themselves for the monsoon! (Recommended Read: Priyanka Chopra Jonas Wishes Her Mother-In-Law, Denise Jonas On her Birthday With An Unseen Picture)

Allu Arjun had gotten married to his long-term girlfriend, Sneha Reddy on March 6, 2011, and the couple were blessed with a baby boy, Allu Ayaan on April 3, 2014. After two years, on November 21, 2016, the couple had embraced the parenthood for the second time and had welcomed a baby girl, whom they had named, Allu Arha. We have seen a lot of pictures and cute videos of the whole family and the beautiful couple on their respective Instagram handles. 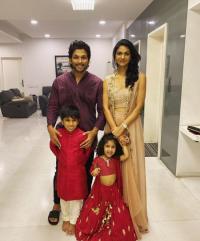 Allu Arjun's wife, Sneha Reddy took to her IG handle to post a picture of her little munchkins, Arha and Ayaan, all clad in blue and yellow raincoats, getting wet in the light drizzle, looking cute as buttons. It seems the Reddy family is all set for monsoon in their cute attires, planning for a lot of fun activities. For the caption, Sneha put a red-heart alongside the pictures. Check it out below: Allu Arjun is a doting dad, who shares a fun camaraderie with his kids. On June 13, 2020, Allu Arjun had taken to his Instagram handle and had posted an adorable video with his 3-year-old cutie-pie, Arha. In the video, we could see Arha looking like a sweet candyfloss in her baby pink top. The loving daddy had asked his daughter, Arha, to marry the boy of his choice and her reaction while listening to the question was simply too hard to ignore. The baby girl had said 'no' to her daddy and had run to the other room. Along with this sweet video, Allu Arjun had written a caption that could be read as "Attempt number #374 #nanatrails" followed by a red heart emoticon.

On April 3, 2020, Baby Ayaan had turned 6-years-old, and the doting father, Arjun had gotten emotional while wishing his son a happy birthday. Allu had posted a picture of his son, Ayaan on his Instagram handle, wishing him with a heartfelt note, in which he had described how he'd never thought he would be able to love someone this much! He had captioned the adorable picture as "I used to think "what is Love?? "all my life. Many times in the past, I felt strong feelings but was not sure if it was Love. But after you came into my life, I now know what LOVE is. You are the LOVE. I Love you, Ayaan. Happy Birthday My Baby." (Also Read: Kartik Aaryan Gives An Epic Reply To A Fan Enquiring About His Marriage And It Will Make You ROFL) 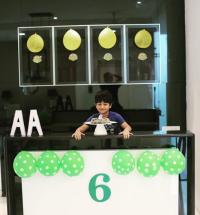 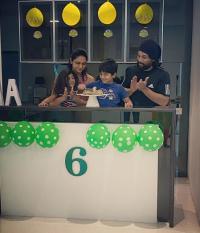 Having garnered millions of fans with his chocolate boy image, and amazing dance moves, Allu Arjun enjoys a lot of female attention. Once in an interview, he had spoken about what is his wife, Sneha's take on the same. He had said, "My wife (Sneha Reddy) is extremely strict. Also, I don't believe my female fans would want to disturb my marital life. They know I'm married and have kids. My wife says they should live with me to know how I am actually. She's sure they'd no longer remain my fans." (You May Also Like: Karan Patel Recalls Moment When He Had Cried While Cutting Umbilical Cord Connecting Ankita And Mehr)

How are you enjoying the monsoon?