Priyanka Chopra Jonas pens a sweet birthday wish for her mother-in-law, Denise Jonas with a beautiful picture of them. Scroll down to check it out! 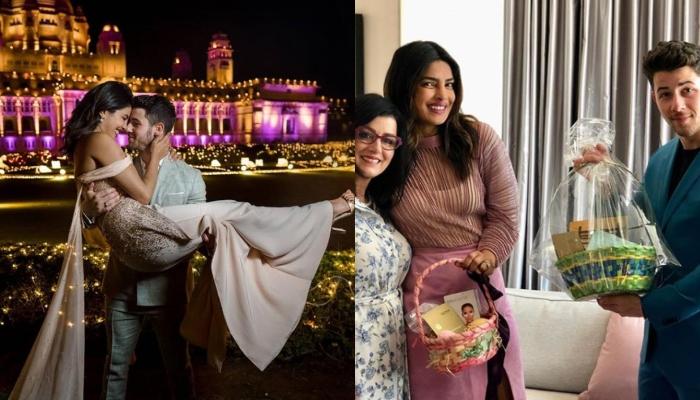 Bollywood actress, Priyanka Chopra Jonas has inspired everyone with her success in Hollywood. Along with that, the actress has made our nation proud many times by standing-up for underprivileged people around the globe. The actress has shown that the Indian values of treating everyone with respect and love are imbibed in her culture, which is pretty evident in her behaviour. Scroll down to know how Priyanka Chopra Jonas wished her mother-in-law on her birthday! (Recommended Read: Anupam Kher's Mother, Dulari Has Been Shifted To Isolation Ward After Testing Positive For COVID-19)

Priyanka Chopra Jonas shares a great camaraderie with all of Jonas family, especially her jethani, Sophie Turner. In an interview with the Hindustan Times, Sophie Turner had spilt the beans on what does she think about Priyanka Chopra. She had said, "With Pri, especially, it's kind of crazy. You have to remind yourself that she's had a 20-year career in Bollywood already. She's like the biggest thing in India right now." She had also mentioned the craze of Priyanka in India and had said, "When we went there for her and Nick's wedding, we were treated like royalty. They worship her over there."

Priyanka Chopra Jonas took to her IG handle on July 13, 2020, and curated a sweet birthday wish for her mother-in-law, Denise Jonas. She posted a beautiful selfie of her and her mother-law and wrote, "Happy Birthday, MamaJ! Thank yours for your constant grace and generosity. I'm So glad you are here and we can celebrate you today together. Love you so much. @mamadjonas @nickjonas." Check out the picture below:

The bahu of Jonas family, Priyanka Chopra Jonas shares a great rapport with her in-laws. An instance of which we had seen at the Jonas Brothers' Happiness Begins Tour concert in Miami. Priyanka's husband Nick Jonas, along with brothers, Kevin and Joe had performed live on stage as Priyanka and the entire Jonas family had cheered them from among the audience. Nick's father had shared a couple of pictures on his IG handle after the concert. Sharing a collage of his wife Denise Jonas having fun with him and daughter-in-law Priyanka, he had written in the caption, "Sometimes you just need to stop and take in the moment. #happinessbegins." In one of the pictures, we could see Denise and Priyanka sharing a warm hug on their flight to Orlando.

As you all know, Bollywood's desi girl's husband, Nick Jonas never got a chance to meet his father-in-law, Dr Ashok Chopra, but some time ago, he had wished to have a chance to meet him. Like every father, Priyanka's father, Mr Chopra too had a wish to see his daughter get married. In an interview with Zoom, Priyanka had revealed that her father used to keep on saying 'Main suit kab silwaau, main suit kab silwaau'. But destiny had other plans, and Priyanka had lost her father in 2013. It was after five years of his death that Priyanka had tied the knot with Nick Jonas as per both Christian and Hindu rituals. On the occasion of Father's Day, Nick Jonas had taken to his Instagram handle to wish his father, Paul Kevin Jonas and Priyanka's father. For Priyanka's father, Nick had mentioned how he wishes to have had a chance to meet him and how he has raised an incredible daughter. Sharing a picture of Priyanka's childhood picture with her father, Nick had written, "Happy Father's Day to all the dads out there! My dad is and has always been my hero. Love and miss you @papakjonas. Dr. Ashok Chopra, I wish I would have had the chance to meet you. You raised an incredible daughter, and I'm so blessed we found each other. And to everyone not able to be with their fathers I'm thinking of you today and sending you love." (Also Read: Sameera Reddy's Daughter, Nyra Turns One, The Doting Mommy Shares Unseen Moments With Her Angel)

Not only with her in-laws, but Priyanka also shares a warm bond with her jethani, Sophie Turner as well. On June 30, 2020, Priyanka Chopra Jonas had taken to her Instagram handle and had posted a beautiful monochrome picture of the stunning couple, Sophie Turner and Joe Jonas. Atop of this amazing picture, Priyanka Chopra Jonas had wished them on their first anniversary and had written, "Happy 1st anniversary! Love you both." (You May Also Like: Rajeev Sen On Separation Rumours With His Wife, Charu Asopa: Believes Someone Is Brainwashing Her)