Rumours about Kartik Aaryan dating Sara Ali Khan have been doing the rounds for some time. Recently Kartik gave an epic reply to a fan, who enquired whether he got married. In the digital world of selfies, hashtags and trolls, a celeb’s life is under the constant radar of paparazzi. Whatever they do becomes a piece of news and every fan wants to know, what is happening in their favourite celeb’s life. Their hook-ups, break-ups, whom they are dating, everything become a piece of an interesting topic for all their fans. And talking about the social media culture, then the young lot of actors are known to keep a friendly relationship not only with the paps but with their fans too. And a similar gesture was shown by actor, Kartik Aaryan when he indulged in a one-on-one session with his fans. (Also Read: Sameera Reddy's Daughter, Nyra Turns One, The Doting Mommy Shares Unseen Moments With Her Angel)

Kartik Aaryan had garnered limelight with his famous monologue in his debut film, Pyaar Ka Punchnama. His debut film has got him much-needed recognition among the masses and has got him into Forbes India’s top 100 celebrity list in 2019. The versatile actor has been linked with most of his co-stars but it was actress, Sara Ali Khan’s confession of having a huge crush on him on the chat show, Koffee With Karan that had won our hearts. And thanks to director, Imtiaz Ali, we had gotten a glimpse of this adorable jodi’s on-screen chemistry in the movie, Love Aaj Kal.

Since the day, Sara had admitted her crush on Kartik, there have been speculations about the two dating each other had started doing the rounds. Recently the actor took to his Twitter handle and surprised all his fans with a #AskKartik session. In the session, Kartik was at his funny best and responded all the questions with his wit. But it was his response on marriage that was unmissable. When a fan asked him whether he is planning to get married, he replied, “Actually abhi best time hai Kharcha nahi hoga.” Soon after, another fan asked, “Sir rumour hai ki lockdown me aapne bhi Shaadi kr li....is that true????” To this, Kartik’s replied, “Jis hisaab se chal raha hai lagta hai Bachcha bhi lockdown mein ho jayega .”

When Sara had made her confession about her crush on Kartik Aaryan, it had not only surprised host, Karan Johar but Kartik himself. On the red carpet of Lux Golden Awards 2018, when Kartik was asked about Sara’s proposal for him, he had said that he would love to go on a coffee date with the gorgeous actress. On February 10, 2020, Kartik had taken to his Instagram handle and had shared a candid picture where he was feeding Sara with his own hands. Along with the picture, he had written a cute caption which can be read as “Kaafi dubli ho gayi ho… Aao pehle jaisi sehat banayein.” (Also Read: Vivek Oberoi Wishes Aishwarya Rai Bachchan And Entire Bachchan Family 'Quick Recovery' From COVID-19)

Sara Ali Khan and Kartik Aaryan look adorable with each other and the rumours and speculations about the two dating, never fade away. In an interview with the Pinkvilla, Sara was asked about the rumours of her relationship status with Kartik, to which she had said that the rumours don’t affect her as she shares a strong bond with him. She had further added that she is dating him in their film, Love Aaj Kal and that is what matters right now.

Kartik and Sara have always won our hearts with their cute social media banter and February 9, 2020, was no different. Sara had taken to her Instagram handle and had shared a clip from her upcoming movie, Love Aaj Kal where she was seen holding Kartik’s hand. Along with the picture, she had written the lyrics of the song, Mehrama from the movie, Love Aaj Kal which could be read as “Chahiye kisi saaye mein jagah Chaaha boht baar hai, Na kahin kabhi mera dil laga, Kaisa samajhdaar hai, #Mehrama #LoveAajKal.” On Sara’s post, Kartik had commented, “Fevicol ka jod hai.” (Also Read: Raveena Tandon Wishes Happy Birthday To Son, Ranbirvardhan On His 13th Birthday, Shares Rare Photos)

Well, we love Kartik’s sense of humour. What about you? Let us know. 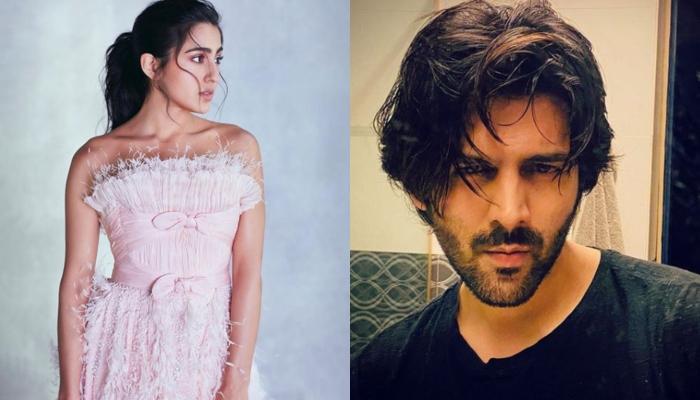