To everyone's surprise, Jacqueline Fernandez's film, 'Tell It Like a Woman' song, 'Applause', is nominated for Best Original Song and will now compete against 'RRR' song, 'Naatu Naatu'.

The ever-so-gorgeous actress, Jacqueline Fernandez is once again in the headlines and slowly leading the trending charts on social media. However, this time around, it is not related to her alleged involvement in the 200 crore money laundering case or association with the conman, Sukesh Chandrasekhar. On January 25, 2023, it was officially announced that the feature film, Tell It Like A Woman’s song, Applause, has been nominated in the Best Original Song category at the upcoming Academy Awards.

Jacqueline Fernandez is on cloud nine after her film, Tell It Like a Woman's song, Applause, gets nominated for Best Original Song category at the Oscars

As soon as the international media broke the news, Jacqueline Fernandez quickly shared the wonderful news with her fans in India, as it was an instrumental success for her. The actress shared a screengrab of a picture from Variety in which we can spot all the nominations in the Best Original Song category at the 95th Academy Awards. The songs featured in the list were Hold My Hand (Top Gun Maverick), Lift Me Up (Black Panther: Wakanda Forever), This Is a Life (Everything Everywhere All At Once), and Naatu Naatu (RRR). 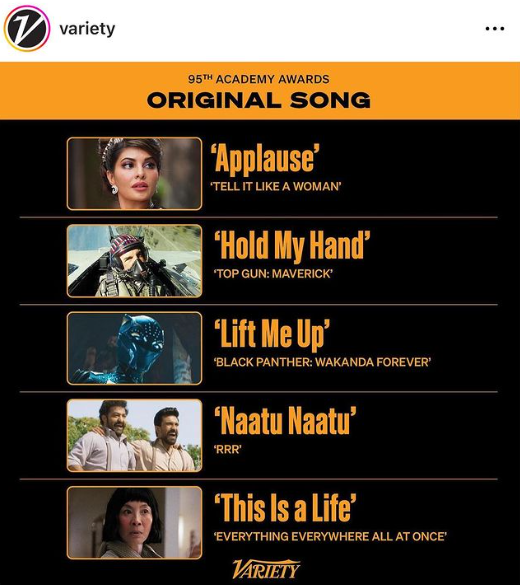 It was a proud moment for every Indian to see Jacqueline Fernandez being a part of a film, whose song has been nominated for the Oscars. Along with the picture featuring the nomination, Jacqueline also penned a heartfelt note in the caption of her post in which she thanked the cast and crew of her film, Tell It Like a Woman. From thanking the film’s director, Silvia Carobbio, to her co-stars, Cara Delevingne, Eva Longoria, Anne Watanabe, Freida Pinto, Leonor Varela, Marghreita Buy and others, for the huge success. An excerpt from her note can be read as:

"Beyond words right now Congratulations to @dianewarren @sofiacarson for the Oscar nomination for ‘Applause’ and making us all proud! It was an honour to be associated with this beautiful film ‘Tell it like a woman’ alongside such esteemed artists! Thank you." 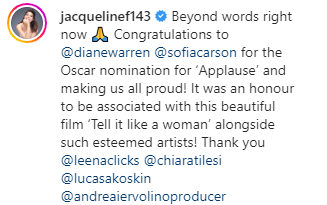 In her congratulatory note, Jacqueline Fernandez also sent her warm wishes to the entire team of RRR. It is indeed a monumental success for Indian cinema to see its stars and stories making an impact on global cinema. For years, we have seen Indian films and actors not getting the mention that they deserve, but it seems like, slowly and steadily, they’ve cracked the code to international success. Coming back to Jacqueline’s note, her heartfelt message to the cast and crew of RRR can be read as:

"Also big congratulations to Team RRR for Naatu Naatu nomination!!! My best wishes and love to the entire team and all the nominees." On January 18, 2023, Jacqueline Fernandez appeared in Delhi’s Patiala Court in order to seek permission to travel abroad for her projects. During the hearing of her case, the actress made some shocking allegations about conman, Sukesh Chandrasekhar and explained how she wasn’t aware of his real identity. Jacqueline shared that Sukesh introduced himself as a government official and a close relative of the late politician, Jayalalithaa. However, the court’s decision is still in process, and only time will tell whether the judiciary believes in the actress or not. 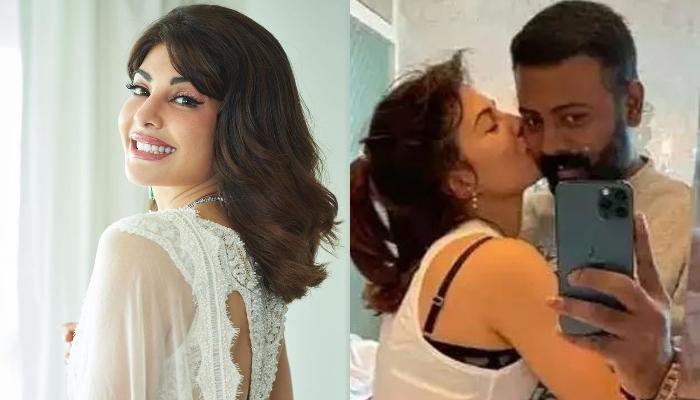 On the professional front, Jacqueline Fernandez was last seen in the film, Ram Setu and Cirkus.