Giving birth to a child and becoming a mother is the most beautiful feeling in this world but not all women feel happy about it. Here is a list of Bollywood and Television mommies who suffered from depression during and after their pregnancy.

Giving birth to a child and becoming a mother is the most beautiful feeling in this world but not all women feel happy after embracing the motherhood. Some feel anxious, depressed after becoming a mother and there is a medical term for the same, postpartum depression. Some also state that depression can creep in during pregnancy also, which is known as prenatal depression. The research says that 1 out of 5 women in India suffer from postpartum or prenatal depression, but not many know about it.

It is not easy for someone to come out of their shell and discuss their mental health on a public platform. There are a few celebrity mommies who have opened about suffering from prenatal or postpartum depression and how they came out of it.

Let’s take a look at the list of those brave celebrity mommies who discussed their mental health on a public platform. Deepika Singh aka Sandhya from Diya Aur Baati Hum tied the knot with the director of her show, Rohit Raj Goyal. In May 2017, Deepika welcomed her first child, a baby boy named Soham. Some time back, the actress opened up about suffering from postpartum depression and low self-esteem in her Instagram post. She shared a video of herself, working out in a gym.

Take a look at what she said about her mental illness after pregnancy:

"Everything comes back " that my Guruji #sanatanchakarvarty told me during my postpartum days when I was suffering from low energy levels, sore back, low self-esteem, furious about how to take care of baby and myself, how to be regular for the workout. but this line gave me a huge motivation, maybe to you as well.”

Also Read: 6 Celeb Mommies Who Opted For Prenatal Yoga To Stay Happy And Healthy During Pregnancy 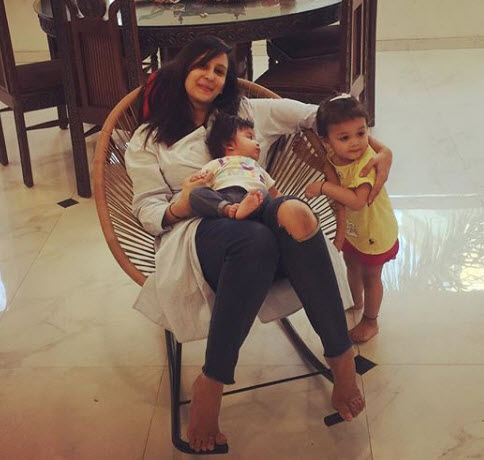 Chahatt Khanna of Bade Acche Lagte Hain fame is a proud mother of two little girls, Zohra and Amaira. After the birth of her second baby girl, she talked about her battle with postpartum depression in her Instagram post. Take a look at what she posted:

"After all the body ache, weakness, weak bones, unable to sit, walk or stand, I finally got myself to gym after 6 months of postpartum, it's so difficult how your body changes after childbirth and especially in less gap, it's difficult to come out of physical, mental and emotional loop, but a small hope of life can help you when everything seems dull, postpartum depression isn't easy, but nothing comes easy in life. Stay fit, stay calm and try to smile a lot, happiness if eventually follow, to all the moms, you are the creators be one! Get back to life."

Also Checkout: 16 Post-Pregnancy Transformation Of Celebrities Who Bounced Back To Slim Original Look 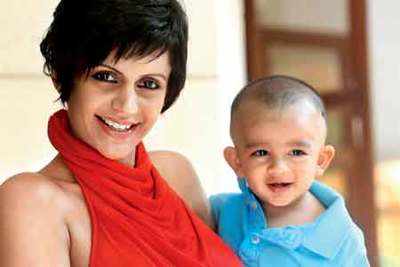 Mandira is an actress, an anchor, a designer, and a hands-on mommy. She is a multi-talented woman who is a super-mom also. She tied the knot with Raj Kaushal in 1999 and gave birth to a baby boy named Vir in 2011. Mandira also suffered postpartum depression for almost 6 weeks after the birth of her baby boy. 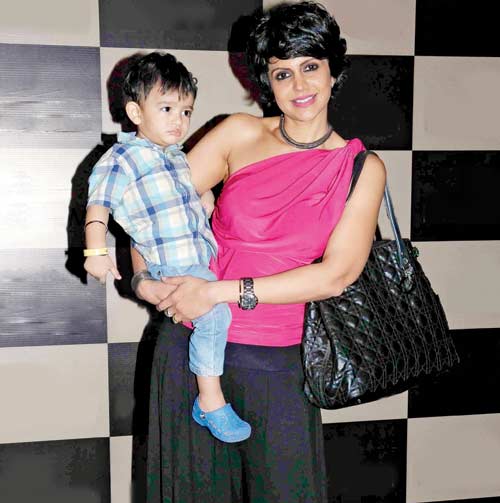 In one of her previous interviews, she shared:

“As a new mum I faced one issue and I would like to talk about it--Postpartum depression is for real. I had it for 6 weeks. I did not fall in love with my baby the moment I saw him. I didn’t. It took me a while to adjust to this new change and it suddenly dawned upon me that my independence is gone, also because I had a baby after 12 years of marriage. I would think that I didn’t sign up for this. Your hormones make you have these weird conversations with yourself and I was depressed, and it lasted for about 6 weeks. I have no qualms in saying that I went through postnatal depression. You need the support of your family around you who know that such a thing exists.”

Also Checkout: Mandira Bedi Wore A 'Bikini-Saree' On Her Beach Vacation To Maldives Shweta Kawaatra, better known as Pallavi from Kahaani Ghar Ghar Kii is a mother to a beautiful daughter named Zahra Tabeetha. Shweta embraced motherhood in 2012 and she took a sabbatical to take care of her little one. 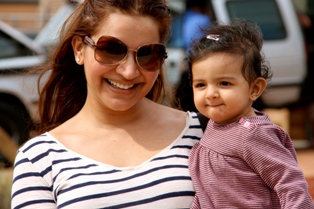 In an interview in 2015, Shweta revealed how she battled postpartum depression. She shared:

"My journey as a mother has been really beautiful, however, I too went through post-partum depression in the first year. Women do undergo baby blues, but they seldom bring it to notice. I'm glad I addressed the issue since it helped me a lot. The first year of motherhood was very tough; and especially for those of us in nuclear families, this issue is graver, since the responsibility cannot be shared. Practising Buddhism helped me a lot; I would chant whenever I felt I needed strength. I was able to elevate my own life conditions and balance everything at one time and be happy.”

Suggested Read: 11 Famous Celebrities Who Are Parents To Adopted Kids Avantika Mohan, a popular blogger, is the wife of India’s bestselling author, Durjoy Datta. The couple tied the knot in 2016 and welcomed their first child, a baby girl named Rayna in 2017. She recently opened up about her battle against prenatal depression. The newbie mommy went through depression, at the time when she conceived her baby. Talking about the same, Avantika posted on her Instagram handle, saying:

“I was diagnosed with depression when I was 19 and was medicated for it. I was fine for a really long time but when I got pregnant I started to suffer from depression again; that's what it felt like at the time. Unlike most to be mothers, I was not over the moon about the pregnancy; something ate at me. It sounds odd but that's how it was at the time. It happens. It happened to me. And when I checked online I saw it happened to a lot of other women as well.

My mother thought it very absurd that I was behaving like this; she kept telling me I should feel blessed, that it was wrong for me to feel this way. And I couldn't explain what I felt like. There was the happiness of course, but there was an overwhelming sadness that loomed over me like a never-ending dark cloud. I didn't take any treatment (I should have but I guess I was too confused and a bit ashamed) but I got better over time. People can be sad in very happy situations as well. This is what depression is. Not everything has to be wrong in your life to suffer from depression. Sometimes it's inexplicable.” 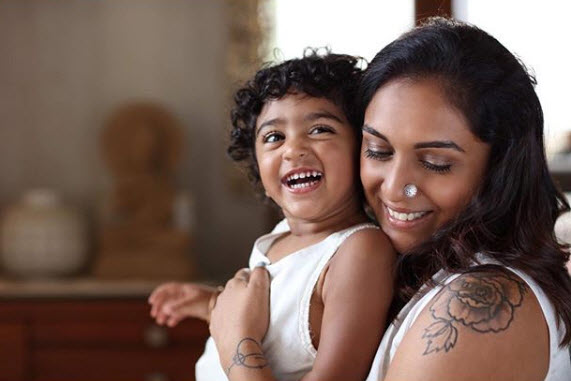 Shveta Salve, the dusky beauty of small screen tied the knot with her boyfriend, Hemant Sethi in 2012 and welcomed her first child, a daughter named Arya in 2016. It was during the time of her pregnancy, specifically, in her third trimester that Shveta went through prenatal depression. 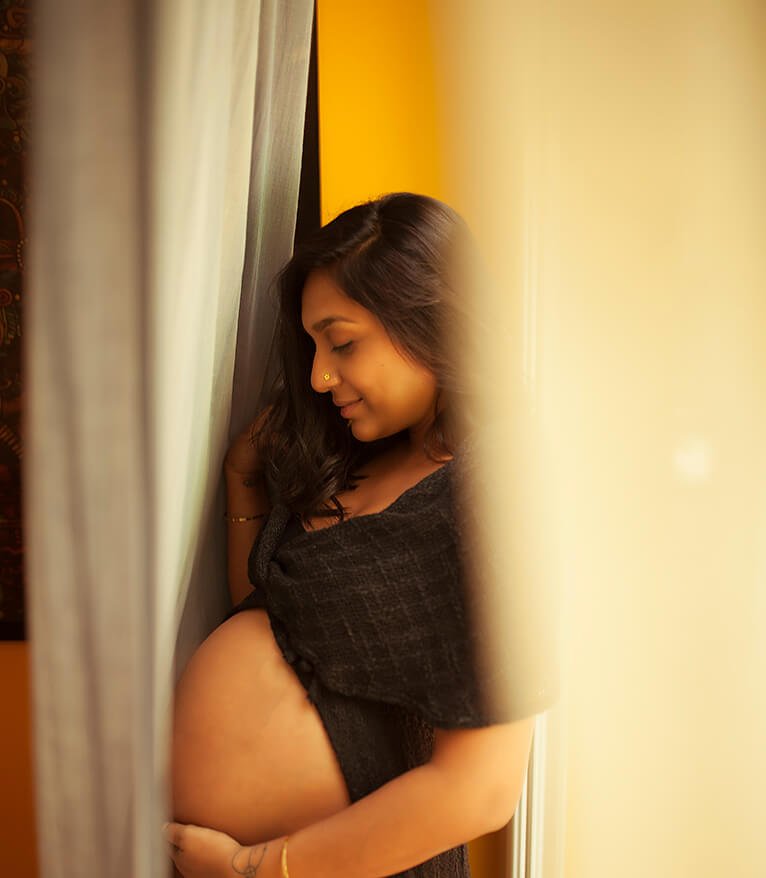 Talking about her insecurities and anxiety during this time, Shveta said:

“Aches and pains, carpal tunnel all happened, my lovely pregnancy glow was dimming and sometimes depression would sink in. Am I ever going to be myself again? Will my body never bounce back? Is my life going to change so drastically? Would I have to make new friends and my social life will end? Will I ever be able to wear a bikini and go to the beach??”

Coming out of your shell and talking about your mental health to someone is very important, otherwise, the depression can literally swallow you. Depression during or after pregnancy is a common thing, it can happen to any woman. So, just like these celebrity mommies opened up about it, you too should confide in someone if you too are going throw it.