'Taish' actress, Kriti Kharbanda revealed when she is getting married to the love of her life, Pulkit Samrat in her latest interview. Find out! 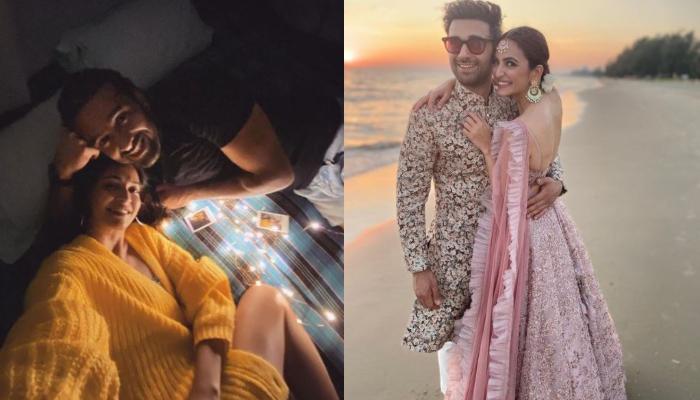 The B-town is always pumped-up with the linkup and breakup rumours of celebrities. However, there's nothing that is hidden from the eager eyes of Bollywood's rumour mills that is always churning out new stories of their favourite stars. Last year, there were rumours that Bollywood actress Kriti Kharbanda is dating Pulkit Samrat. The news had spread like wildfire all over the internet, and the two had kept mum about the rumours. (Recommended Read: Yash And Radhika Pandit's Son, Yatharv Is A Carbon Copy Of His Mother, She Proves It With A Collage)

But with time, the couple had accepted that they're in a relationship with each other and since then we are witnessing their cute PDAs through their respective Instagram handles. Now, Kriti Kharbanda has opened up about her marriage plans with Pulkit Samrat and when the two are entering into the wedlock. Scroll down to know it!

In an interview with the Bangalore Mirror, Taish actress, Kriti Kharbanda talked about her recent road-trip with her boyfriend and actor, Pulkit Samrat and how important it was for them to have a getaway after so many months in the lockdown. The actress said, "The trip gave us time to get to know each other better. I feel lucky to have someone like Pulkit, who makes sure that I always have a smile on my face. I try my best to do the same for him." Kriti also heaped praises on her beau, Pulkit and called him the ambassador of self-love. She added, "I admire the fact that he's true to himself and can be a brand-ambassador for self-love." (Don't Miss: Dimpy Ganguly Captures Her Daughter, Reanna's Excitement As Her 'Daadu' Surprises Her [Video])

The adorable couple was recently seen in the film, Taish and garnered a lot of praise and compliments from the audience and critics for their intense performances in their respective characters. No doubt, both Kriti Kharbanda and Pulkit Samrat are riding high both in their professional and personal life. However, the actress has also addressed her much-asked marriage plans with her boyfriend, and luckily, this time around, Kriti revealed a thing or two. She said, "We've just been dating for a year-and-a-half now and haven't discussed marriage, nor do we plan to do it anytime soon. We're focusing on our respective careers right now." Kriti concluded her statement by adding that marriage is still way too far from where she and Pulkit are at the moment. She concluded, "Marriage is a distant dream."

Last year, in an interview with ETimes, Kriti had confirmed her relationship with Pulkit. She had admitted that all those rumours of her being in a relationship with Pulkit are true. The reason why she hadn't disclosed it at that time was that she had wanted her parents to know first. The actress was quoted as saying, "No, they are not rumours. We are dating each other. In all honesty, I wanted my parents to know first that I'm dating someone and when you start seeing someone, it's I think there's a time for everything when you're comfortable talking about it. Sometimes it can take five years; sometimes it can take five months. In our case, it was five months, but I'm in a very happy place, and I have no qualms admitting that I am dating Pulkit Samrat." (Also Read: Bigg Boss 14: Kavita Kaushik's Husband Talks About Aly Goni's Threatening Behaviour Towards His Wife)

Do you want to see these cuties enter the wedlock? Let us know!