Yash and Radhika Pandit are enjoying every moment of their lives with their babies, Ayra and Yatharv. On November 25, 2020, Radhika shared a collage where Yatharv looked exactly like his mommy. When a child is born, everyone's life changes for the best. From nana-nani to dada-dadi, everyone showers their immense love on them and pampers them without any limits. But one thing that we always keep hearing is the little one’s striking resemblance to their parents. Their features, mannerisms and habits are often compared with that of their parents. And why not, children are the mirror image of their mommy and daddy and often end up looking exactly like them. One such kid is K.G.F. star, Yash and actress, Radhika Pandit’s son, Yatharv, who is often compared with his star parents especially for his looks. (Also Read: Alia Bhatt Wishes Beau, Ranbir Kapoor's Cousin, Arman Jain On His Birthday With A Beautiful Picture)

Yash and Radhika Pandit are the most sought-after celebrity couple of the glamour world and enjoy a huge fanbase. After falling head-over-heels in love with one another, the duo had gotten married in 2016. On December 2, 2018, the couple had embraced parenthood with the arrival of a baby girl, whom they have named Ayra. On October 30, 2019, Ayra was promoted to a big sister with the arrival of Yash and Radhika’s second child, a baby boy, Yatharv.

Yash and Radhika love sharing glimpses of their children through their social media handles. And just like their daughter, Ayra, their son, Yatharv too is often compared for his striking resemblance with his mommy and daddy. And now to delight their fans, Radhika shared a collage where the little munchkin looked exactly like his mother. On November 25, 2020, Radhika took to her IG handle and shared a collage with a throwback picture of her childhood and the other picture where her mother is holding Yatharv. In both the pictures of Radhika and Yatharv, it was difficult to point out any difference as they looked exactly same. Along with the collage, Radhika wrote, “I couldn't help but notice many of u have mentioned that Yatharv resembles me... well he is a combination of both Yash and me for sure, but here is a fun pic for u guys.”

On October 30, 2020, Yatharv had turned one and his doting parents had penned adorable wishes for him. Radhika had taken to her IG handle and had shared a collage of pictures of Yatharv from the day he was born to some of his adorable moments. Along with the collage, Radhika had written, “Happy birthday to the one who will always, forever be my baby boy. Love u” followed by a heart emoticon. On the other hand, Yash had shared a cute picture of Yatharv and had written, “Roar loud... Happy Birthday my lil cub.” (Also Read: Anushka Sharma Flaunts Her Baby Bump In A Yellow Mini Dress, As She Steps Out Of The Vanity Van)

The lovely couple has been riding high on parenthood and makes sure to cherish every moment spent with their little ones. When their baby boy had completed six months, the doting parents had shared the adorable pictures of their complete family. In the pictures, Yash was seen next to his wife, Radhika, who had held her two little cotton balls in her arms. While Ayra had posed for the camera for one of the pictures, her baby brother was curled up in his mommy’s arms. Their pictures were all about love and had given major family goals. (Also Read: Pregger Anushka Sharma Gets An Intricate Jewelry Gift From Sabyasachi With Her And Virat's Initials)

Doesn’t Yatharv looks exactly like his mommy? Let us know. 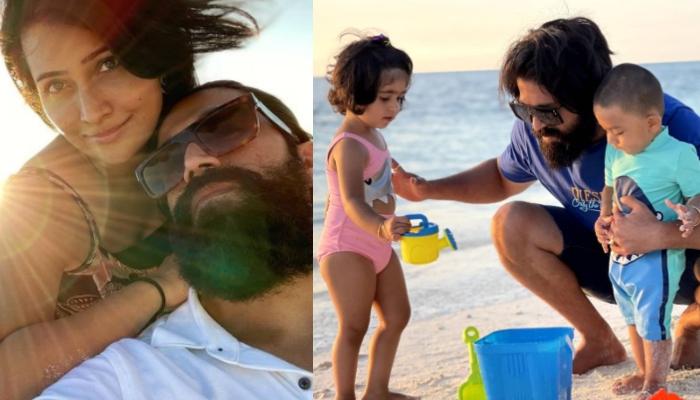 It seems like the Maldives is everyone’s favourite holiday destination these days. Celebs like Kajal Aggarwal-Gautam Kitchlu, Sidharth Malhotra-Kiara Advani, Aadar Jain-Tara Sutaria, Samantha Akkineni-Naga Chaitanya, and Tiger Shroff-Disha Patani have jetted off to the Maldives to begin 2021. As we scroll through our social media handles, we are mesmerised with