It was in April 2019 when Surveen Chawla became a mommy for the first time. She celebrated her daughter, Eva's 6-month birthday and that's how we got to see their first family picture! 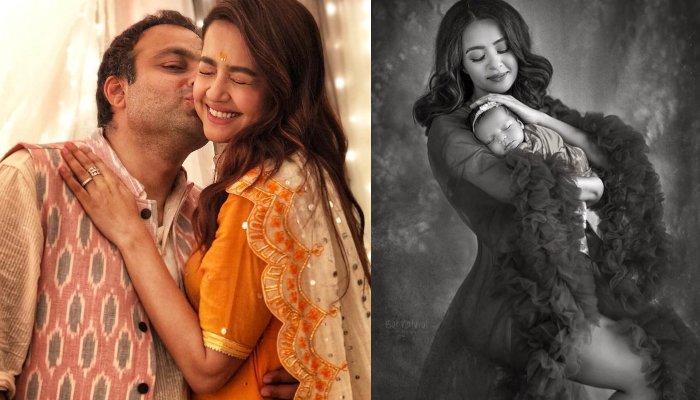 The world may cease to ebb and flow but parents’ love for their child will always remain the same, come what may! Becoming parents is one of the best God-gifted jobs in the world! You not only get to do a lot of cuddling and celebrating but also become a witness of your one’s many firsts. The same goes for one of the most talented and hard-working actors of the Tinseltown, Surveen Chawla. Not only did she become a mommy for the first time this year, but also recently celebrated something important. (Do Read: K.G.F. Star Yash's Wife, Radhika Pandit Shares Glimpses Of Her Surprise Bee-Themed Baby Shower)

Surveen Chawla was one of the few stars who had to embrace her pregnancy period beautifully and never shied away from coming out in the open with a gain in weight and her cute baby bump. And on April 19, 2019, Surveen became a mommy for the first time and had announced the same by posting a close-up of two baby feet. She had also revealed the name of her little princess, Eva. Sharing the picture, the doting mommy had written, “We now have her tiny feet to fill the tiny shoes! Blessed by her wonderful arrival in our little family! Welcoming our daughter Eva @akshaythakker.”

Time flashes by in the blink of an eye! Only when we think that we don’t want our children to grow up, do we realise that we are already celebrating their birthdays! And things are no different for Surveen Chawla and her hubby, Akshay Thakker for the couple celebrate their daughter, Eva’s ‘half birthday’. Her Godfather, Anurag Kashyap was also present at the do, who took to Instagram and shared a beautiful, first-ever family picture of the awesome threesome. The caption that had accompanied the post could be read as “These new parents need every possible excuse in the world to celebrate the daughter. Happy 6 months on this earth to Eva @surveenchawla @akshaythakker. P.S. it's half a cake by the way. The candle though is full.”

Isn’t it a precious ‘first-ever’ picture by Anurag Kashyap? In case you are still wondering about the ‘Godfather’ bit, soon after Eva’s birth, Surveen Chawla and Akshay Thakker had assigned Anurag Kashyap as the little one’s Godfather (someone who will be an intellectual guardian for a child). Announcing the same, the Sacred Games director had written, “Eva and her Godfather @surveenchawla @akshaythakker.” To which, Surveen had commented on Anurag’s post, “Rightfully @anuragkashyap10”, followed by flying hearts emoji. Take a look:

Soon after Eva’s birth, we all had been waiting to see a face-glimpse of her and sufficing to everyone’s requests, Surveen Chawla had taken to Instagram and had shared a dreamy picture of a perfect mother-daughter moment, which also happened to be the first full picture of Eva. The picture had a black-and-white monotone, with a Godly Surveen, dressed in a frilled-lacy long dress, with her little daughter, Eva, adorably cuddled up in her arms as she lovingly looked at her. Sharing the picture, Surveen had written, “To love... I know now... @butnaturalphotography.”

On March 2019, Surveen Chawla had taken to her Instagram handle and posted a couple of pictures from her godh bharai (baby shower). Dressed in a yellow saree, pink blouse, heavy pearl necklace and jhumkas, the then soon-to-be mommy had looked a million dollars! What had further accentuated her look was her neatly tied flower-adorned bun, small pink bindi and the pregnancy glow on her face. Sharing the pictures, Surveen had written, “The Godh Bharai" for the little angel... A very very very special and big thank u to the following wonderful people for putting this memorable evening together." (Must Read: Saif Ali Khan And Kareena Celebrate Their 7-Year Anniversary With Taimur And A Heart-Shaped Cake)

We last saw Surveen Chawla in Sacred Games 2 and how we loved her! In an earlier interview conducted before the release of the show, Surveen had talked about balancing professional life and mommyhood, “Right now, I have Eva to take care of but you will see me back as soon as Sacred Games 2 gets launched. Till then, my daughter is going to take all my time now and then it is going to be back to the grind.” Expressing how life has changed with the arrival of little Eva in their lives, Surveen had stated, “It hasn’t hit me completely. I am feeling strange, thinking and feeling the way I am doing... it almost feels like... you know.... sometimes people say that a new ‘you’ will be born when you give birth, this almost feels like that. I am feeling things which were alien to me. Just feeling them is surreal, in a good way, of course. The feeling is inexplicable, and I can’t describe it in words.”

Surveen Chawla had also shared her insights on embracing motherhood in an interview, "Honestly, initially, the fear of change engulfed me, but later, the beauty of it all started sinking in. Now, I feel like I am embarking on a new journey and adventure of sorts. I don’t know how many women will tell you the truth, but the reality is that motherhood is a slow, gradual process. Motherly instincts are not born out of anywhere. Motherhood, to me, is a feeling that grows on you, with the growing life inside you. I think just the fact that women are designed to grow a whole being inside them is a far more superior feeling." (Also Read: Kareena Kapoor Khan Can't Believe Kalki Koechlin Is Six Months Pregnant, Says, 'I Was Like A Cow')

Isn’t it amazing? Also dear readers, how did you like Surveen, Akshay and Eva’s first family picture shared by Anurag? Keep us posted!