'KGF' star, Yash's wife, Radhika Pandit is soon going to become a second-time mommy and to celebrate the happiness, her friends threw her a surprise baby shower. Scroll down to see the pictures! 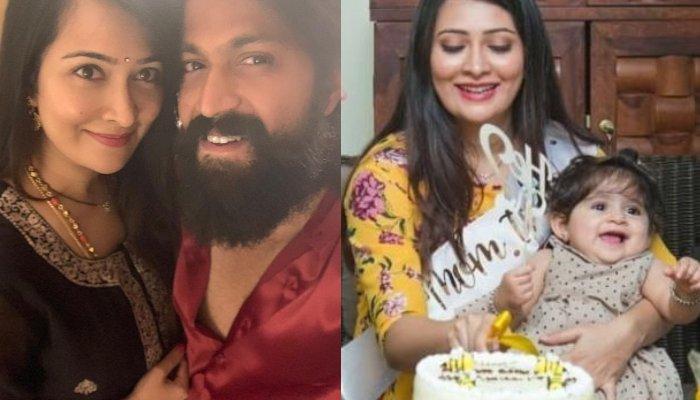 The journey of being a mother is a bumpy ride. It is filled with dizzy days to sleepless nights and tonnes of weight gain. Despite it all, it is the most magical experience every woman craves for. And when the baby is on the way, it is not just the mommy who gets ecstatic, but the entire family celebrates the nine months! Hence, a baby shower is the perfect way to celebrate the calm before the chaos arrives (if you know what we mean)! And in similar lines, K.G.F. actor, Yash and his wife, Radhika Pandit are all set to welcome their second child. (Recommend Read: Esha Deol Twins With Mamma, Hema Malini In Hues Of Green On Her 71st Birthday, Pens A Heartfelt Wish)

Yash and Radhika had gotten married in the year 2016 and on December 2, 2018, they were blessed with a little angel, whom they had lovingly named 'Arya'. And after ten months of their first baby, they are all set to welcome another one. On October 13, 2019, Radhika's girl gang hosted a surprise baby shower for the soon-to-be-mommy.

Today, on October 16, 2019, Radhika took to her Instagram handle and shared glimpses of her bee-themed baby shower. In one of the pictures, we can see Radhika holding her angel, Arya. In another picture, we saw the yummiest 'bee-themed' cake that read, 'He or she? What will it bee?'. Along with these lovely pictures, Radhika wrote a heartfelt note thanking her friends, which can be read as "My girl gang threw a Surprise Baby shower for me!! It was fabulous with a Bee theme. Thank you to all the aunties to Bee for this BEE..AUTIFUL shower!! Love you guys."  Take a look at the pictures below:

Recently, in an interview with The Times of India, Radhika had talked about her second pregnancy. She had shared, "This time around, it has been a more familiar feeling. I have been there and done that, so I know the symptoms and what to expect after my first time. I found it easier as I knew what to expect and there was Ayra (her firstborn) to keep me distracted too." (Also Read: Deepika Padukone Has Already Decided How To Raise Her Child With Ranveer Singh And It's Adorable)

Talking about her surprise baby shower, Radhika had stated, "The traditional baby shower is usually only done for the first time. My gang felt that they didn't want to deprive me of a celebration for my second one and planned a surprise. It was a yellow and black themed party titled Mommy To 'Bee'. They just took me to the venue and surprised me with my ready outfit and hair and makeup, along with a lot of games."

In the same interview, Radhika had revealed that the family is all set to welcome the baby this time. She had said, "I'm all ready for round two. We've got the changing table, crib and lots of clothes already. We've already seen it all during Ayra's birth. Though, I can imagine how my home is going to be filled with diapers for the next few years. And, of course, I am also going to have to get used to being awake longer."

Earlier, in an interview, Radhika had talked about motherhood and her decision of not keeping a nanny. The actress had stated, "I was very clear that I’m not going to have a nanny to look after my baby. I am happy to say that I’m a hands-on mother. Some nights, she just refuses to sleep and I find it hard to stay awake. But then she gives me a naughty smile and there couldn’t be anything more adorable than that."  (Don't Miss: Shweta Tiwari Shares Adorable Pictures Of Her Kids, Palak Tiwari And Reyansh Kohli)

Well, we totally love Radhika's bee-themed baby shower! What about you?