Ever since television’s modern bahu, Ekta Kaul has shared a cryptic picture of her holding someone’s hand on her Instagram page, it has left her fans wondering who the guy is. Ekta’s post surely made the assumptions strong that either she got hitched or going to soon, as she captioned the picture as, “From today until forever” along with the romantic hashtags like #soulmatesunited and #dealissealed. (Also Read: Kareena Reveals She Signed 'Veere Di Wedding' Before Pregnancy, Thanks Saif For Motivating Her)

And just a day after the Veere Di Wedding trailer released, in which Sumeet Vyas is seen going down on his knees to propose Kalindipuri (Kareena Kapoor Khan), the news started floating that he might tie the nuptial knot in September 2018. And how is this two news linked? Well, as per the reports, the mystery man in Ekta Kaul’s posts is speculated to be Sumeet Vyas and the alleged bride-to-be for the Veere Di Wedding actor is none other than Ekta.

On March 3, 2018, Ekta Kaul shared another intimate picture of celebrating Holi with her new life partner or fiancé who can be seen kissing her on her forehead. And she captioned it, “And into his arms I go. To lose my mind and find my soul..” In another picture she shared of her holding hands of her special someone, she captioned it as, “They didn't agree on much. Infact they didn't agree on anything. They fought all the time and challenged each other everyday. But despite their differences they had one thing in common. They were crazy about each other!! "The Notebook" #mystrength #igotallofit”

Though the lovebirds, Sumeet Vyas and Ekta Kaul are tight lipped about their alleged affair, a little research on their Instagram accounts gave a confirmation that Veere Di Wedding actor, Sumeet Vyas is engaged to Mere Angne Mein fame actress, Ekta Kaul. In the picture shared by Ekta in February, holding hands with the mystery guy in her life, Sumeet’s masi, uncle and her cousin commented on the picture. And they all are eagerly waiting to welcome the new member in their family. Check out the screenshots of the comments:

And just going through Sumeet’s pictures, his hands look so much similar to the hands in the picture shared by Ekta Kaul. Check it out here:

According to the reports of TellyChakkar, Permanent Roommates fame actor Sumeet Vyas and Mere Angne Mein fame actress, Ekta Kaul are dating each other and are going strong for quite some time now. A source told Tellychakkar, “The duo is dating since some time now. It is still unknown about how they met but they are going strong.” The source further stated, “The couple is all set to tie the knot. Ostensibly, Ekta and Sumeet might exchange the vows this September. Their respective families have already accepted the couple.” (Also Read: Varun Dhawan Reveals His Lady-Love Natasha Dalal's Reaction On 'October') 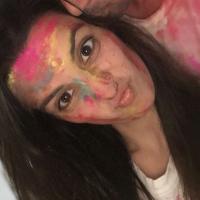 Meanwhile, when Ekta Kaul was contacted, she confirmed that she is getting married in September, but she denied that she is getting hitched to Sumeet Vyas. However, when Veere Di Wedding actor, Sumeet was contacted, he retorted, “No comments.” It is still unknown how Ekta and Sumeet met, but apparently, Sumeet wooed her with his charm post his digital series Permanent Roommates. A little birdie shared with the Tellychakkar, “They exchanged rings this February.” 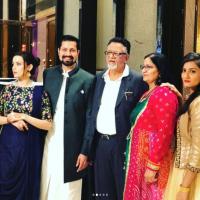 Veere Di Wedding actor, Sumeet Vyas and Mere Angne Mein fame actress, Ekta Kaul’s fans have surely rejoiced with this news, but we all are still waiting to hear it from the horse’s mouth. There was a time when our television screens were ruled by 'saas-bahu' dramas and there was no content for youth to watch. That's when a web series made a special place in our hearts as it depicted the reality of the modern-day love stories. Yes, we are talking about everyone's favourite