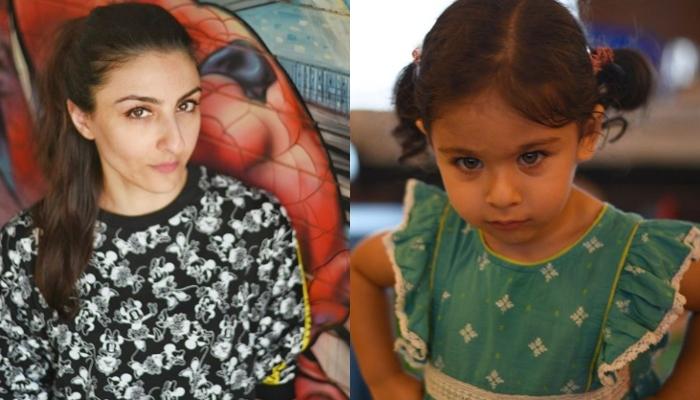 Being a mother is one of the most tiring jobs and requires a woman to be on her toes 24*7. From giving birth to raising her kid to be a good human being, a mother is equipped with all the superpowers. Not just that, mothers are multi-taskers, who, along with nurturing their children, also make sure to do justice to their professional commitments. And one such successful mother is actress, Soha Ali Khan, who dotes on her little angel, Inaaya Naumi Kemmu. (Also Read: Rana Daggubati and Miheeka's Forest Theme Wedding Was Inspired by This Painting [Picture Inside])

On September 29, 2017, Soha Ali Khan and Kunal Kemmu had welcomed their little bundle of joy, Inaaya Naumi Kemmu into their lives. Since then, their life has turned into a paradise with their little princess. Be it her cute yoga sessions or her adorable paintings, we love everything about Soha and Kunal’s cute little munchkin. And with the ongoing lockdown, the little princess is spending and enjoying her time with her parents at home. Inaaya Naumi Kemmu never fails to surprise us with her cuteness. On August 9, 2020, Soha took to her IG handle and shared a picture of her little angel, Inaaya Naumi Kemmu on ‘book lovers’ day’. In the picture, Inaaya looked adorable in a yellow frock as she was seen engrossed in her book. Along with the cute picture of her little doll, Soha wrote, “Booked for the weekend #bookloversday.” 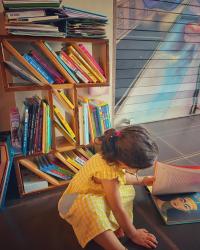 Soha Ali Khan is a doting mother, who makes sure to indulge her angel, Inaaya Naumi Kemmu in something or other. Whether practising Yoga with daddy, Kunal Kemmu, or helping him in peeling peas, we love the way Soha and Kunal are raising their little wonder. And we all know how much Inaaya loves painting and sharing a glimpse of the little artist in the house, Soha had taken to her IG stories on July 1, 2020, and had shared a picture of Inaaya working on her masterpiece. Soha had also shared the outcome of Inaaya’s work, and it won’t be wrong to say that there is definitely a Picasso in the making. (Also Read: Rhea Kapoor Has An Epic Reaction To Dad, Anil Kapoor's Youth, Reveals All The Junk Food He Eats) 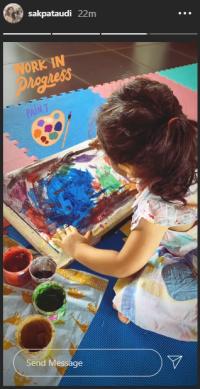 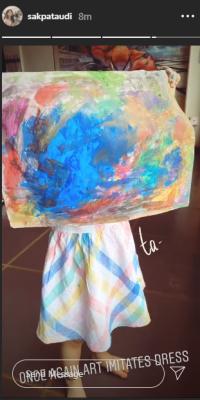 In an interview with Pinkvilla, Soha Ali Khan had talked about how she keeps her angel, Inaaya Naumi Kemmu occupied. Calling it an opportunity to calm one’s self during the fast-paced life, Soha had said that she keeps Inaaya engaged in baby-friendly group workouts. Talking about the same, Soha had shared, “As a family, we do baby-friendly group workouts, so Inaaya gets involved as well. She’s quite the riot while she’s grooving to the music during our Zumba sessions.” 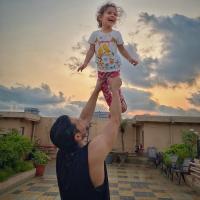 Soha Ali Khan and Kunal Kemmu’s life had taken a complete U-turn with the arrival of their little munchkin, Inaaya. As per the reports of the Deccan Chronicle, Kunal had stated that he and Soha became different people after the birth of Inaaya and are still learning the dos and don’ts of parenting. Adding further he had said that earlier they would just spend the whole day watching television but now, things are different. He had also retorted, “Now at times, I have to wait to talk to Soha because I knew she will not take my calls at certain times, and so on.” (Also Read: Mahesh Babu's Daughter, Sitara Wishes Him 'Happy Birthday' In This Must-Watch Heart-Melting Video) 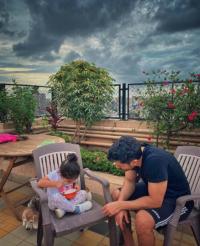 Isn’t Inaaya the cutest star kid? What do you think? Let us know.

For the world, you might be a simple woman, but for your 'daddy dearest', you are always going to be his princess. A father is the only one, who knows you 'can' achive all your dreams, even on days when your mom couldn't. He is the one, who encourages you to set