There are tons of couples out there, but there's something pleasing and beautiful about the jodi of Mahesh Babu and Namrata Shirodkar that brings a smile on our faces. Mahesh Babu and Namrata Shirodkar had met in the summer of 2000, for the first time for a movie, and by the end of the film, Mahesh and Namrata had already fallen in love with each other. On February 10, 2005, the couple had taken the wedding vows, had welcomed their first kid, Gautam Krishna, in the year 2006, and was blessed with their second child, a daughter, named Sitara in 2012. (Recommended Read: Smriti Khanna's Daughter, Anayka Looks Alike A Cute Colour Palette In This Adorable Video)

Well, Mahesh Babu has celebrated his birthday recently, and it was his daughter, Sitara, who delivered the best birthday wish to the South Indian superstar. Scroll down to see Sitara's adorable video message!

Namrata Shirodkar Shares Video Of Daughter, Sitara Dancing On 'Ek Do Teen' During Their Paris Trip On August 9, 2020, South Indian actor, Mahesh Babu celebrated his 45th birthday with his family and the internet was flooded with beautiful wishes from his family, friends, and billions of fans. However, it was his daughter, Sitara's heart-melting birthday wishes through a video that has won everyone's hearts. The doting daughter uploaded a video of herself in which we can hear her saying, "Hi nanna, Happy Birthday! This is your day, and this one is for you. Your birthday is one of my favourite days of the year, and I am so excited that I get to spend it with you and I want it to be really fun. It is the lockdown time, and we are going to spend it with each other. I love you so so much." Along with this heart-melting wish, Sitara also wrote a caption, and it can be read as "My most favourite day of the year!! Happyyy Birthday Nanna You're the best dad everrr. I love you so so much @urstrulymahesh." Take a look.

Well, Mahesh Babu's doting wife, Namrata Shirodkar, had also taken to her Instagram handle and had posted a cutesy picture with him. In the picture, we could see the duo sharing a sweet moment as Mahesh Babu gives a peck of love on Namrata's forehead. Alongside it, Namrata had penned a sweet note, which could be read as "True love is how I experience it with YOU. Happy Birthday MB. I love you, now and always. @urstrulymahesh." Check it out below: (Don't Miss: Kamya Panjabi And Shalabh Dang's Adorable Notes On Their Six-Month Anniversary Is Pure Couple Goals) There's no doubt that just like any other father-daughter duo out there, Mahesh Babu is also extremely close to his daughter, Sitara. On July 20, 2020, Sitara had turned 8-year-old, and her parents and brother had showered immense love on her through their heartwarming posts on their respective Instagram handles. But her daddy's wish was the best one as he had taken to his Instagram handle and had shared a beautiful IGTV video of his daughter, Sitara. The video was a compilation of Sitara's unseen memories from her childhood till now. Sharing the video, Mahesh had penned a little note for his daughter in the simplest manner ever. He had written, "So fast so 8 I love you as you will never know Wishing you a very happy birthday Parpi #SituPapaTurns8 @sitaraghattamaneni" followed by heart emoticons.

On May 31, 2020, Mahesh Babu had taken to his Instagram handle to do an 'Ask me anything' session with his fans. His fans had bombarded him with a variety of questions. One of the fans had asked Mahesh to choose between his son, Gautam and daughter, Sitara. His question could be read as "Who do you like more Sitara or Gautam?" Mahesh had given an apt reply calling his kids to be a part of him. He had replied, "Both of them are a part of me!! How could I love them less???" Take a look. (Also Read: Sunny Leone Plays A Hilarious Prank On Her Sleeping Hubby, Daniel Weber, Calls Him A Good Husband) 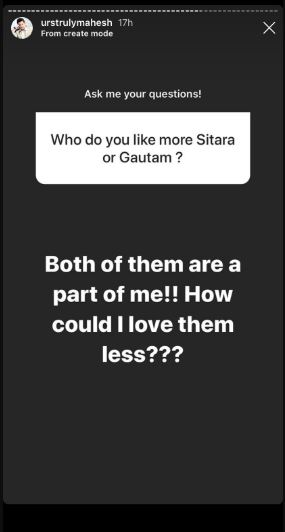 Namrata Shirodkar Shares Video Of Daughter, Sitara Dancing On 'Ek Do Teen' During Their Paris Trip