Rana Dagubbati and Miheeka Bajaj had found inspiration for their wedding dÃ©cor from a South painting. Scroll down to check out the picture!

Marrying the person you love has to be the best feeling in the whole wide world. Your dream of living a life together, starting a family and growing old comes to reality and South superstar, Rana Daggubati is blessed with this feeling. From the wedding venue, to outfits to décor to every other detail, the couple plans of everything and takes inspiration from every possible thing! Something similar has happened with Rana and Miheeka as they had found inspiration for their wedding décor from a painting. Scroll down to know more! (Also Read: Shweta Bachchan Nanda Gives A Savage Reply To Son, Agastya As He Welcomes Mamu, Abhishek Home)

Rana had put the entire nation at shock when he had announced about being taken by Miheeka forever. On May 20, 2020, Rana Daggubati and Miheeka Bajaj's families had sat together for a formal meeting to formalise a date for the couple's engagement and marriage. Posting a picture with his beautiful fiancée, Miheeka, Rana had written, "And it's official!!" Miheeka had also posted two pictures from the ceremony and had written, "To the beginning of forever @ranadaggubati" and "My happy place! @ranadaggubati". And now, finally the two are officially married and have been pronounced man and wife on August 8, 2020. 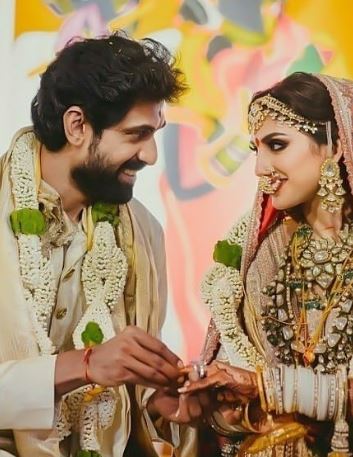 Well, who would have thought of a forest theme for a wedding, but that is what a professional event planner does, and especially, if the wedding is of her daughter! Yes, we are talking about Bunty Bajaj, who is an event planner and Miheeka’s mother, who took it on herself to make her daughter’s wedding to be perfect. Bunty ji chose a décor and theme for the wedding that was never thought of and her inspiration was none other than a vibrant Radha-Krishna painting by a popular Telangana-based artist, Thota Vaikuntam. In a conversation with The Times of India, she revealed that Rana liked the painting a lot and that is how she had chosen the painting to be the central theme for the wedding. She said, “I remember coming across this painting at a gallery... it’s a work that Rana liked a lot. So I decided to use the painting as the central piece around which I’d build the whole theme for my daughter’s wedding. It’s a beautiful work by Vaikuntam sir and the colours really pop out. I liked it instantly.” She further explained, “We used a white wall of flowers so that the painting pops out. And all the colours used in the wedding, be it the décor or the outfits, were natural colours, just like Vaikuntam sir’s paintings.” Take a look at the painting below: The painting interprets Lord Krishna in a white South Indian attire, playing a flute with calmness on his face, while Radha ji can be seen draped in a bright red saree, with a parrot sitting on her palm. The mandap too had the rustic and vibrant theme which was created with the help of colourful floral arrangements, lush green foilage and forest like flowers and ferns dropping down, according to the colour theme of the painting. Rana and Miheeka’s outfit too were inspired by the painting as Rana had worn the shades of cream, and Miheeka was glowing in gold and coral zardozi lehenga. Talking about Miheeka’s lehenga, the gorgeous bride had ditched the traditional red for shades of cream and gold for her elegant wedding attire. The gorgeous Anamika Khanna lehenga donned by Miheeka had taken 10,000 man-hours, as per the words of the designer. The coral veil of the lehenga had accentuated the whole look, and the hand-done zardosi with a fine work of chikankari and gold metalwork on the lehenga paired with a woven gold dupatta had perfectly matched with the theme. (Recommended Read: Smriti Khanna's Daughter, Anayka Looks Like A Cute Colour Palette In This Adorable Video) 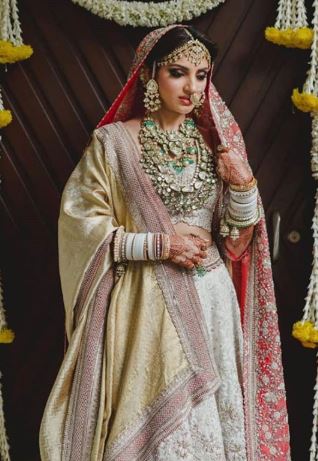 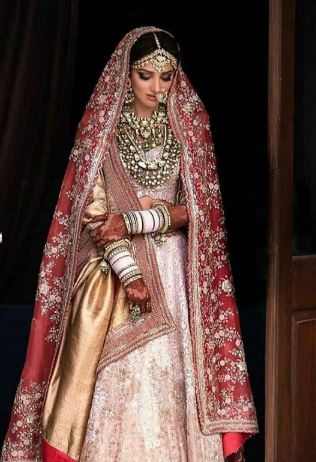 While most of us just dream, Miheeka Bajaj had made her mother proud by wearing her wedding lehenga for the Bhaat ceremony. She had looked gorgeous as ever in a red and grey lehenga, which she had accentuated with stone-cut earrings. Keeping her look all glam yet minimal, Miheeka had preferred a natural makeup look, and had looked royal! Sharing the picture of Miheeka, her mother had emotionally penned down a post, which could be read as "Baht function wearing my wedding outfit, could not stop crying my baby is all grown up.#BAJaoeD." (Recommended Read: Sushant Singh Rajput Once Admitted Which Sister He's Closest To And What's His Most 'Pavitra Rishta') 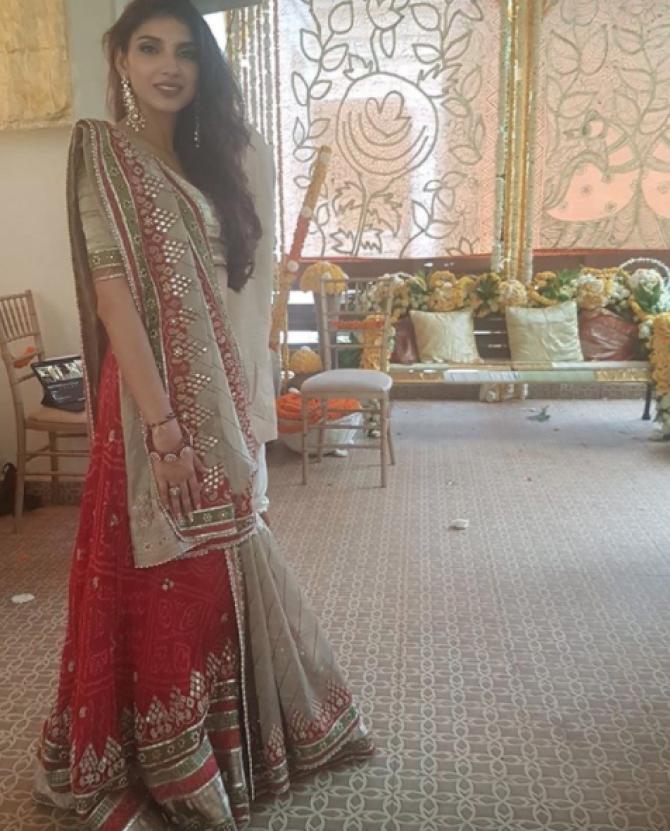 To every couple getting married, this is an inspiration!