Jasleen Matharu and Shivashish Mishra are seen together on many occasions. Shivashish posted a recent picture with a cryptic post which partly revealed his and Jasleen's relationship status. 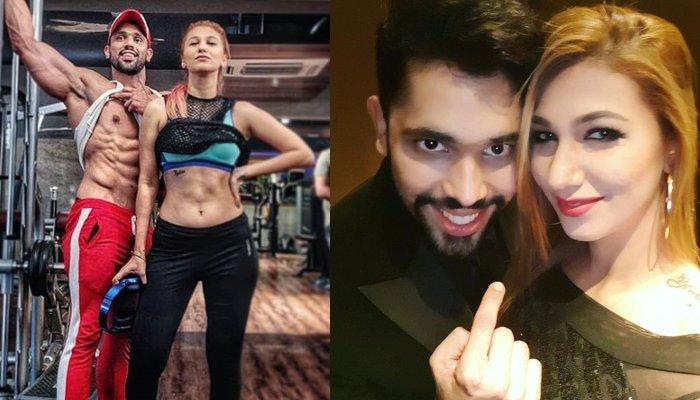 ‘Vichitra jodi’ was the format of India’s most controversial reality show, Bigg Boss 12. Some pairs and some singles had made their entry into the beach-themed house and undoubtedly, it became one of the highest TRP grossing shows. Out of all the celebs and ‘commoners’ who had entered the house together, it was ghazal maestro, 65-year-old Anup Jalota and his then 28-year-old muse, Jasleen Matharu's entry as a vichitra jodi which had grabbed many eyeballs. (Do Read: Mishkat Varma's Rumoured Girlfriend, Aneri Vajani Comments On His And Nephew, Izaan's Picture)

Every time Bigg Boss 12 aired on the television set, we would all eye for Anup Jalota and Jasleen Matharu. And we firmly believe that out of the many jodis, who had come in together, it was only Jasleen and Anup ji, who had kept up with the correct description of ‘vichitra’! They kissed, went on a date, had a breakup and what not during the show, but looks like Jasleen Matharu came out with a ‘keeper’! And no, we aren’t talking about Anup ji in here.

Shivashish Mishra, it is! Yes, soon after Anup Jalota was fake-evicted from Bigg Boss 12, we had seen many instances wherein Jasleen Matharu and Shivashish had become quite attached to each other. Even after getting evicted from the house, Shivashish would always maintain a ‘just friends’ stance with Jasleen and their recent Instagram post too, quite suggests so. In the picture, we can spot the duo flaunting their mid-ribs after a gym session. Shivashish captioned the picture with a cryptic post which partly revealed their relationship status. The same could be read as “Liking someone always doesn't mean that you just need to be lovers, you can also be great friends just like us Your #fitnesscouplegoals #firchick #shredded #mylean.” Jasleen relied on the picture and wrote, “Awwwwwww, Absolutely my sheen Love this picture.” Jasleen too reposted the same image from her own handle wherein, Shivashish commented, “Hatt copycat.” Checkout the ‘just friends’ posts, cute Instagram comments game and the picture here:

We have earlier shared with you about how Jasleen Matharu and Shivashish Mishra had become attached to each other inside the Bigg Boss 12 house. Let us give you a flashback of the same. It was one of the ‘weekend ka vaar’ episodes when Jasleen Matharu and Anup Jalota’s pair was evicted out of the house. However, given their popularity, the jodi was given a choice of letting only one member stay in the house. Anup ji had then chosen to sacrifice and thus, Jasleen remained inside the house. While inmates had believed the eviction, but the twist in the tale lay ahead!

Anup ji was kept in a secret room with a television, wherein he could see all that was being said about him. More so, he could even see his muse, Jasleen Matharu, getting all close to co-contestant, Shivashish Mishra! In one of the following episodes, Jasleen was seen eating from the same plate as Shivashish’s and laughing over the fact that she is very much single! Her then rumoured boyfriend, Anup Jalota had been witnessing all this from the secret room and had expressed his disappointment over the fact that Jasleen had no sorrow that her partner had been evicted. This is what Anup ji had then felt about it ‘aisa jhatka’. (Must Read: Anita Hassanandani Indirectly Reveals If She Is Participating In 'Nach Baliye 9' With Her Ex-BF)

After Anup Jalota’s early exit, a lot was said about his and Jasleen Matharu’s controversial relationship. Do you know, it was Jasleen’s father, Kesar Matharu, who had insisted that Anup ji and Jasleen should enter the house as a jodi, as it would be good for her career? When asked to clarify the same, Anup ji had shared, “No, Jasleen came to me with the idea that she can’t go alone to Bigg Boss (Season 12) since they are looking for ‘vichitra jodis’. I initially said 'no' to her suggestion of going as guru-shishya. However, then, her father came to me and said that this might help her career so I agreed.”

Anup Jalota was asked if Jasleen Matharu had used his fame and popularity for her personal interests. To which, he had replied, “Of course. That was her idea. She wanted to ride on my popularity--- which she did. I am a very positive person and I feel if I can help someone, I should.” Anup ji was also asked that Jasleen wasn’t as selfless as him as she failed to give away her make-up and clothes as a ransom to save him. Anup ji had answered, “I wasn’t hurt. The reaction you saw on TV was just acting. None of the TV actors in the house could guess that I was acting. Mujhe bilkul bura nahi laga ki unhone kapde aur make-up nahi diya because bura to tab lagega jab koi rishta ho. But maine socha usko jhatka dete hai. Being a teacher I wanted to teach her that materialistic commodities are not as important as the person. She cried a lot after that.”

In an interview with the TOI before entering the Bigg Boss 12 house, Jasleen Matharu had shared that her and Anup Jalota’s relationship will come as a complete shocker for the former’s family. She had stated, “This is going to come as a huge shock to my parents and friends as no one is aware of my relationship with Anup Jalota ji. We have been dating each other for the last three and a half years. We usually don’t get time to spend with each other in the outside world due to our busy schedules, but now with the help of Bigg Boss, we will get to do so. Also, we will get to know if we can stay together forever." (Also Read: Urvashi Dholakia's Family Is Very Happy With Her Participation With Ex, Anuj Sachdeva In Nach Baliye)

Now that we have all the clarity on Jasleen and Anup ji’s relationship, do you think Shivashish and Jasleen should date? Keep us posted!