Late legendary filmmaker, Satyajit Ray's love life is one of the most uncovered parts of the Oscar-winning director's illustrious life. Here's everything you need to know about his wife, Bijoya Ray!

Late legendary filmmaker and screenwriter, Satyajit Ray is often regarded as the greatest director in the history of Indian cinema. Even after so many years of his demise, he continues to inspire Indian filmmakers not just in India, but his filmmaking techniques, ideas and thought-provoking methods are celebrated across the world. Satyajit Ray is renowned for his films, Pather Panchali (1955), Aparajito (1956), Charulata (1964), Devi (1960), and the list goes on. In 1992, Satyajit Ray had become the first Indian ever to receive an honorary Academy Award for his contribution to world cinema through his films and ideas.

On May 2, 1921, Satyajit Ray was born in Calcutta to his parents, Sukumar Ray and Suprabha Ray. Since his younger days, he has been interested in cinema and has always wanted to make films. In a career spanning 38 years, Satyajit had directed numerous influential films, documentaries and short films. From winning Bharat Ratna, Padma Bhushan, Dadasaheb Phalke Award to an honorary doctorate from Oxford University, Satyajit Ray had won everything that was there to win.

Recommended Read: SS Rajamouli's Love Story: From Marriage With A Divorcee To Helping Her Become A Renowned Designer 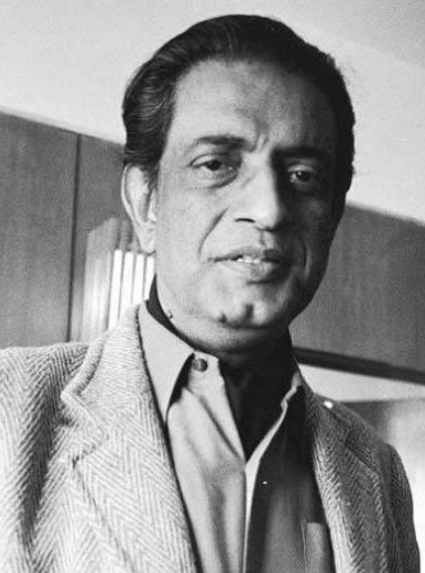 Well, everyone is aware of Satyajit Ray's illustrious filmmaking career, but it is his personal life that had always remained in the shadows for most of his career and sadly, even after his demise. People hardly talk about his personal life and the filmy love story that he had with his wife, Bijoya Ray. The couple had always supported each other through thick and thin but had always preferred to keep their personal life private. 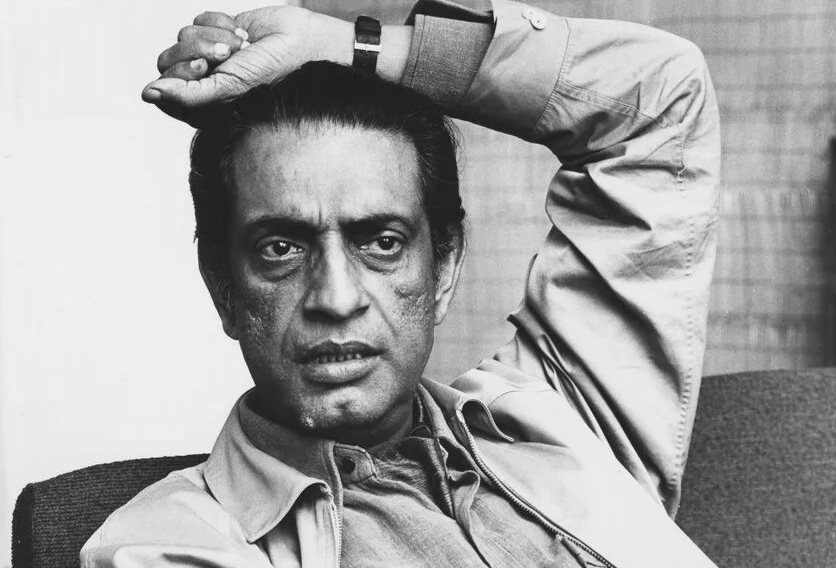 Despite both of them being in the same profession, Satyajit Ray and Bijoya Ray hardly made public appearances together in front of the media, as they were a classic couple, who preferred to be in each other's company away from the flashes of shutterbugs. So, without further ado, let's get straight into the beautiful love story of Satyajit Ray and his wife, Bijoya Ray! 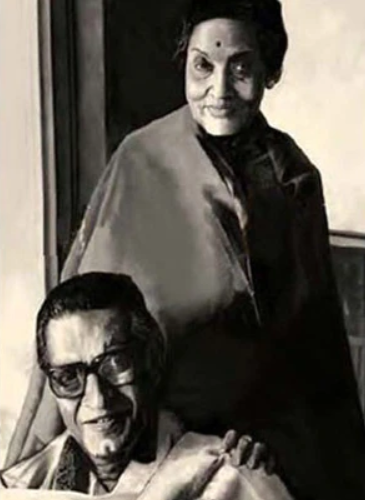 Born on October 27, 1917, Bijoya Das was an actress, who had acted in three films, Shesh Raksha (1944), Mashaal (1950) and Rajani (2009). Bijoya was also the younger sister of Indian freedom activist, Basanti Devi. Apart from acting, she was also quite good at playback singing and had sung a song in the Bengali feature film, Shesh Raksha. However, she had spent most of her time in guiding and supporting her husband, Satyajit Ray. When she was 14 years old, her father, Charu Chandra Das, who was a barrister by profession, had passed away in 1931, after which their entire family had suffered a major financial crunch. After her father's demise, Bijoya Das had shifted to her step-uncle, Prasanta Das, with her mother, Madhuri Devi, and three siblings. At the same residence, Satyajit Ray was also living with his mother, Suprabha Ray. That's when the future husband-wife had met each other for the first time. Bijoya Das and Satyajit Ray were first cousins as per their family roots and relations. However, after spending a lot of time together, they had become good friends, and their common interests in classical music and Hollywood musicals had helped them get closer. Satyajit Ray and Bijoya Das were living in the same residence since they were young. Thus, it had made them understand each other's likes and dislikes more precisely. From playing together to cherishing their hobbies and interests together, Satyajit Ray and Bijoya Das had soon fallen in love with each other. From their first meeting in 1931 to being friends with each other for almost nine years, it was in 1940 when Satyajit and Bijoya had started dating each other. However, both of them knew that it would be a mammoth task to convince their respective families to their marriage. The reason behind it was that Satyajit and Bijoya were first cousins, and the former was younger than the latter. Satyajit Ray and Bijoya Das were madly in love with each other, and the legendary filmmaker used to visit Kolkata just to meet his ladylove. The connection and love between the lovebirds were so pure and true that Satyajit used to write poems for Bijoya when he was working in an advertising agency. Soon the couple had decided to get married without the knowledge of their respective families because they knew that they'd never approve of their relationship. Hence, the couple had got married in a registry marriage in Mumbai. After which, they had tied the knot in a wedding ceremony at Bijoya's sister's residence on October 20, 1948. The wedding was attended by Satyajit and Bijoya's closest friends and family members, who had approved of their relationship. After his secret wedding with Bijoya Ray, the iconic filmmaker, Satyajit Ray had organised a small reception party for his industry mates. However, the highlight of the party was that legendary actor, Prithviraj Kapoor and his wife, Ramsarni Mehra Kapoor had graced the party to bless the then-newly married couple. 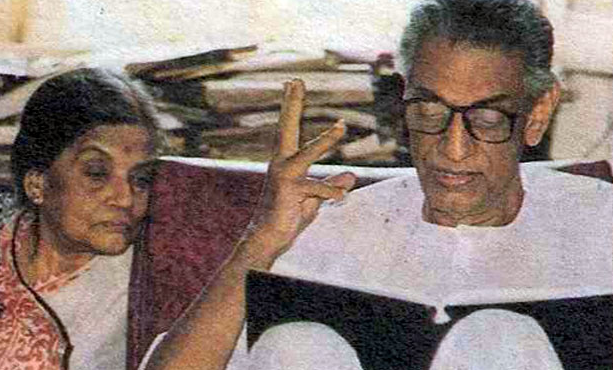 After their secret wedding and intimate reception, Satyajit Ray and Bijoya Ray were married in the eyes of the law. Still, they weren't living together because their family and relatives were unaware of their marriage. Once in an interview with a newspaper, Bijoya Ray had opened up about her secret wedding with her husband, Satyajit Ray and had shared that it wasn't a mix of happiness and pain. Reflecting on the same, Bijoya had explained that she and Satyajit couldn't live together despite being married, which was getting harder for them as they were missing each other badly.

When Satyajit Ray's mother accepted his marriage with Bijoya Ray 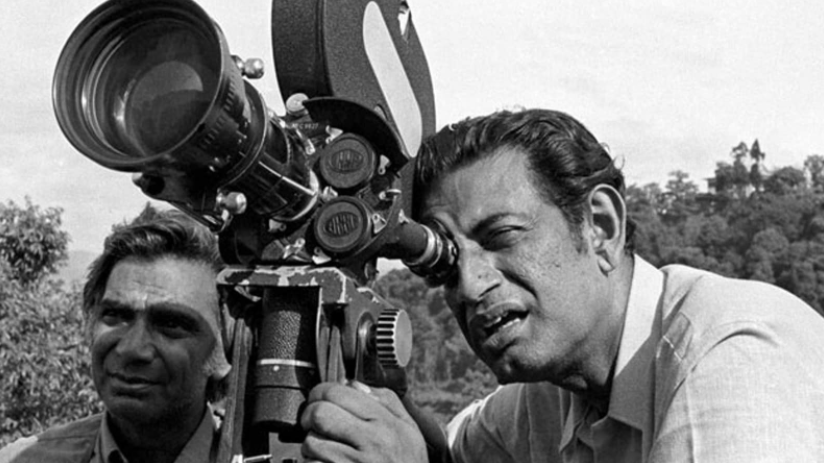 Satyajit Ray and his wife, Bijoya Ray were finding it extremely hard not to live together. That's when the critically-acclaimed director's close friend and physician, Nosho Babu had come up with a clever plan to convince Satyajit Ray's mother, Suprabha Ray. The physician had told Satyajit to tell his mother that if she and other family members disapproved of his decision to marry his first cousin, Bijoya, he would remain unmarried for life, as he would not marry another girl. 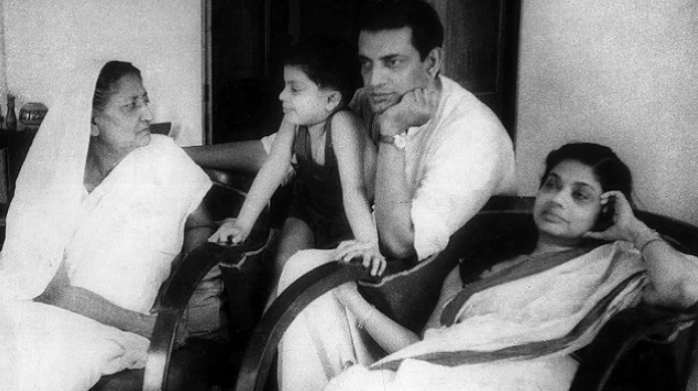 When Satyajit Ray had said the same to his mother with much persuasion, just like every doting mother in the world, Suprabha Ray had agreed to her son's wish and had approved his wish to marry the love of his life, Bijoya Das.

You May Like This: 'Flying Beast' Gaurav Taneja And Ritu Rathee's Lifestyle: Expensive Cars, Net Worth, Kids And More

Satyajit Ray and Bijoya Ray's marriage for the second time 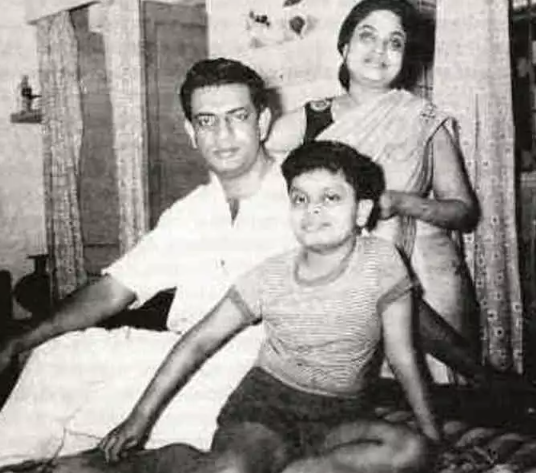 After three years of their happy married life, Satyajit Ray and his wife, Bijoya Ray had welcomed a baby boy into their lives on September 8, 1953. The doting parents had lovingly named their son, Sandip Ray. The little boy had followed in his father's footsteps, as he had also become a filmmaker who predominately works in the Bengali cinema. 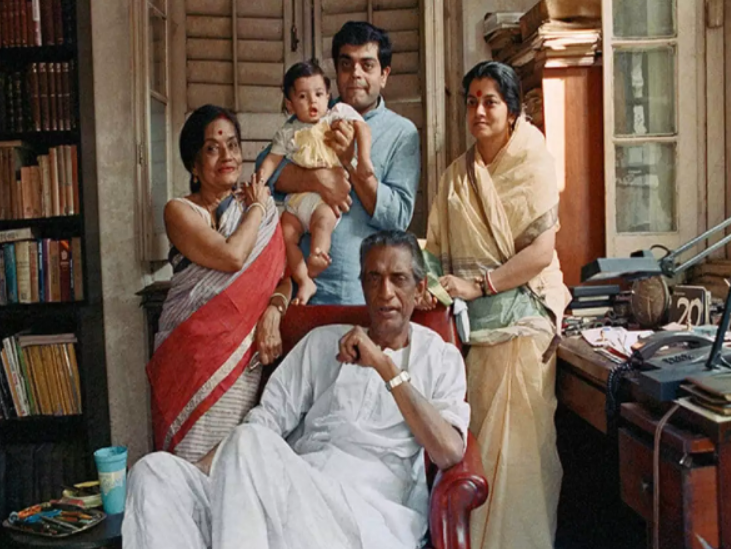 Satyajit Ray and Bijoya Ray's only child, Sandip Ray had got married to the famous costume designer, Lalita Ray and together, they had welcomed a son, Souradip Ray on November 22, 1990. The youngest crop of the Ray family, Souradip is also in the film business and works in the production department. 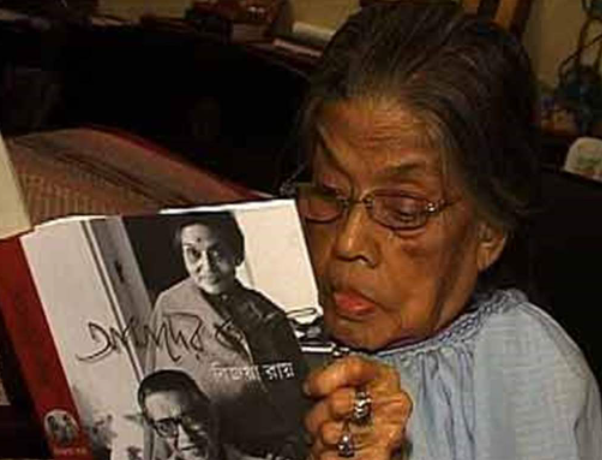 On April 23, 1992, inarguably the greatest filmmaker in the history of Indian cinema, Satyajit Ray had died due to lung and heart ailments. The Oscar-winning director had breathed his last in a hospital in Calcutta with his family and close friends around him. After a few years of Satyajit Ray's demise, it was on June 2, 2015, when Bijoya Ray had passed away at the age of 97 due to acute pneumonia.

Well, it'll be fair to say that whether we talk about his professional or personal life, Satyajit Ray's life was like the script of a romantic film.

Also Read: Meet Imran Tahir's Wife Sumayya Dildar For Whom He Left His Nation, And She Left Her Modeling Career