Sara Ali Khan flipped through her old photo album and shared an unseen picture with her daddy, Saif Ali Khan. Check it out!

The bond shared between a father and a daughter is magical. While a mother knows millions of ways to pamper and love her kids, a father knows nothing accept to be with them. It is his support that makes his daughter stronger and happier. After all, he is the first man, who knows how to lift up his little angel's mood when nothing seems right. And an exactly similar relationship is shared between Bollywood actress, Sara Ali Khan and her father, Saif Ali Khan. (Recommend Read: Vikas Guppta Shares A Cryptic Post On Revenge After His Friendship Ends With Divya And Varun)

We all know that Sara Ali Khan shares an immense pleasure in calling herself 'Amrita ki beti', but she has always shared that she is her abba, Saif Ali Khan's little girl. We remember how Saif didn't liked the idea of his daughter entering the filmy world as she was a scholar in Columbia university. But he had loved his daughter's acting skills in her every film. 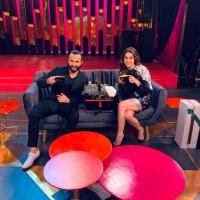 Sara often shares glimpses of her childhood with her fans. On July 15, 2020, she took a journey down the memory lane and posted a picture with her 'daddy dearest'. In the picture, we can see little Sara resting on her abba, Saif while he was posing for the camera. Alongside the picture, Sara wrote, "The one person that has always been the definition of peace, the epitome of love, and the personification of Mickey Mouse. Love you Abba." Check it out below: 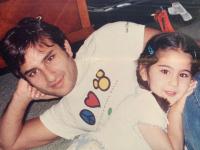 In an interview with the Hindustan Times, Sara had talked about her father and had said , "I know my father very well. Dad is like me, so he says what he is thinking at that particular point. He never really says things for any ulterior motive. I love my mother a lot. I think when you have a lot of time to show a feeling or emotion, it’s easier. Mum is a single mother and I am everything because of her but she has every day to show how much she loves me. I don’t live with my father so, I haven’t felt that [emotion from his side]." (Also Read: Anupam Kher Reveals He Lied To His Mom, Dulari And Told Her That She Has An Infection Not COVID-19) 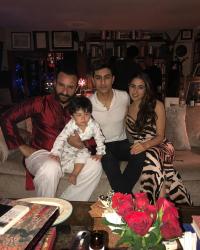 She had further added, "The only thing that I know about dad is that he has always been a great father. He has always been there without even living with us. So, I think he deserves a special hug and love from me for never making me feel that he doesn’t live with me because he was, and is always just a phone call away. And that’s really comforting." (Don't Miss: Irrfan Khan's Son, Babil Khan Pens An Earnest Poem Reflecting How He Could Never Fill His Dad's Shoe)