Television world’s loved couple, Sanjeeda Sheikh and Aamir Ali are having trouble in their love-filled paradise and are reportedly heading for divorce. Aamir replied to the rumours and speculations. 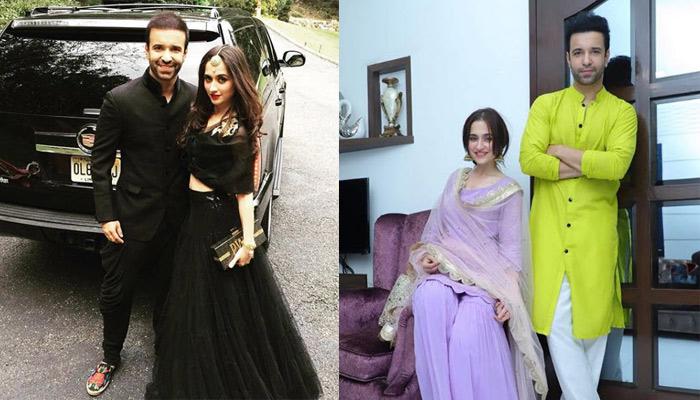 One of the most difficult parts in someone’s life is to let go of that one person with whom they have had their most cherished moments. That one person who has always stood by you no matter what the situation is. The thought of letting go of that person who has motivated you, guided you, scolded you and supported you through thicks and thins gives you nightmares. But what will you do when you fall out of love? Staying with the same person with whom you have promised a ‘happily ever after’ after falling out of love will only give pain and suffering. Staying in a relationship which is not based on true love and understanding is just unimaginable. (Recommended Read: Zaheer Khan Shares A Cute 34th Birthday Wish For His 'Lifelong Entertainer', Sagarika Ghatge Khan)

Television world’s loved couple, Sanjeeda Sheikh and Aamir Ali are considered to be the epitome of everything perfect in a relationship. The madly-in-love couple initially started as friends and then from friends they turned to best friends. From best friends to lovers and then finally from lovers to husband and wife. Their love story is nothing less than a fairytale and they make us believe in the notion of a perfect and blissful marriage. Their social media handles are filled with their mushy pictures and adorable captions for one another. Aamir had fallen in love with her beauty and Sanjeeda, on the other hand, had gotten attracted to his sweetness. 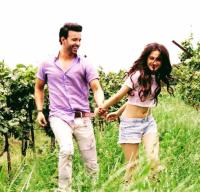 The life of celebs is such that sometimes they are forced to show off their love and sometimes even if they fall out of love, they prefer to remain silent about the same. From not posting their pictures on their social media handles to not being spotted together, this is how the audiences resume that something is not right, and the same thing happened with Sanjeeda Sheikh and Aamir Ali. As per a report by SpotboyE, everything is not well between the couple and they are heading for separation. The report also stated that they are currently living separately. A source informed SpotboyE, “Yeah, Sanjeeda and Aamir are not staying together since some time. They are having issues.” SpotboyE even contacted Aamir and he replied by saying, “I don’t know what you are talking about.” When Hindustan Times contact Aamir, he replied, "All is ok." 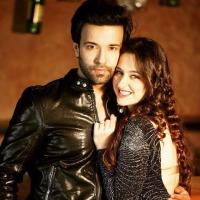 Sanjeeda Sheikh and Aamir Ali’s social media handles were once filled with their mushy pictures but from quit some time, the duo has stopped posting pictures together. But despite all the rumours and speculations about their separation, it was on December 20, 2019, when Aamir had taken to his Instagram handle and had posted a love-filled video for his ladylove, Sanjeeda on her birthday and had even written a heartfelt caption, which could be read as “Happy bday love.. Ull always be a part of me n in my heart always.. stay happy n blessed.. #happybirthday.” To this Sanjeeda had commented, “Thanks Ali.” (Suggested Read: Kajol Reveals That She Had Two Miscarriages Before Nysa And Yug, Talks About It For The First Time)

More than the picture what caught our attention was the assumption of their fans and followers on their relationship. After Sanjeeda’s straight forward reply, the comment section was filled with comments from their fans and followers assuming that something is not right between the couple. One of the comment could be read as “Something is fishy.. You are breaking up with him just like other celebrities who divorce within a year and post life quotes on Instagram.. You too are overreacting and becoming like them isn't it ? @iamsanjeeda.” Here are the other comments for you: 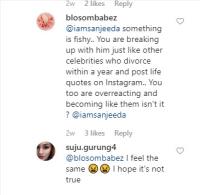 On Aamir Ali’s birthday on September 1, 2019, Sanjeeda Sheikh had taken to her Instagram handle and had posted a picture with him and had written a heartfelt birthday wish. The wish could be read as “@aamirali my wish for you is that you continue to love life and never stop dreaming ..i love u HAPPY BIRTHDAY.” 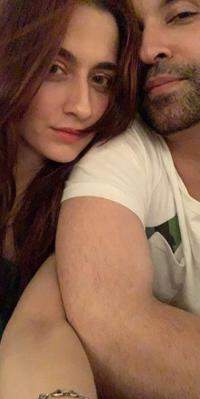 In a throwback interview with the Hindustan Times, Sanjeeda Sheikh and Aamir Ali had spoken about their love and many more. When the duo was asked who is more romantic, Aamir had replied, “She is more romantic than me. I have become more romantic post-marriage.” Agreeing on the same, Sanjeeda had stated, “I am. I have known him since the last 10 years. He has changed a lot after marriage. He was never an expressive person, and I think I have helped him become one. I am very vocal about what I feel, and wanted my partner to be like that as well. Now, he has become an expert in surprising me. For me, romance is all about spending quality time with your partner. When we were dating, after shooting for 16 hours, I would ensure that I spent at least one hour with him every few days a week.” 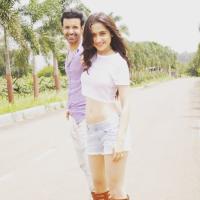 During the same interview, the madly-in-love couple had talked about their most memorable day and Aamir had revealed, “One of our special moments is the way I proposed to her. I am a shy person, and I can’t do romantic things. I am very casual, and might have just popped the question casually. But I felt that since she was so special, I should make the proposal special for her. I went down on one knee, presented her a ring, and took her for dinner. When I was on my knee, I was hoping no one else was watching me (laughs).” Sanjeeda had also shared the same and had said, “The day he proposed to me was magical. I don’t know how he became so filmi that day. It totally impressed me.” (Must Read: MS Dhoni And Sakshi Dhoni Enjoy A Snow-Filled Vacation With Daughter, Ziva And Family) 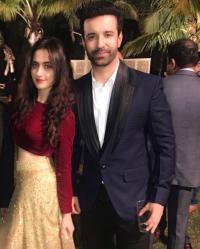 Here’s hoping that everything is well between Aamir Ali and Sanjeeda Sheikh! 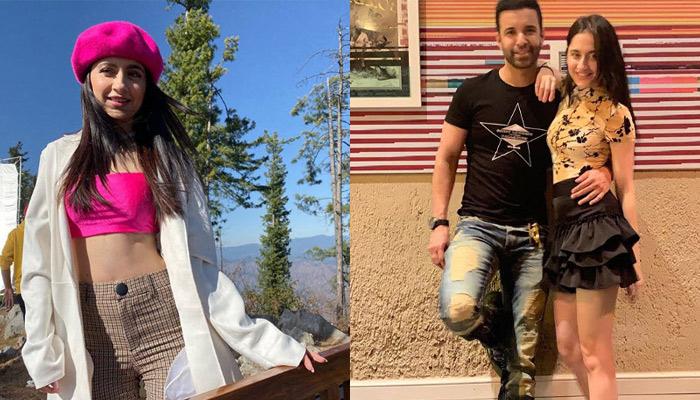 Falling in love is easy but the difficult part is to stay in love and sometimes when a couple falls out of love, they prefer to part their ways. Gone are the days when a couple would stick together for the sake of society and family pressure. Now, if a