Sana Khan is enjoying every moment of her married life. On November 26, 2020, she shared a glimpse of how she is being pampered by her ‘sasu maa’. 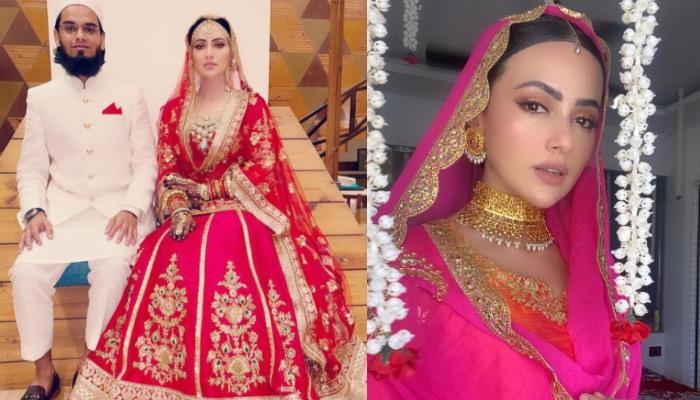 Whenever a girl gets married, all she wishes is to get a family, who loves her like their own daughter. And nothing can replace the feeling she gets, when her in-laws love her and take care of all her comfort. From getting away from her own house to having a loving set of parents, this is what a woman craves after she gets married. And Sana Khan is one such lucky girl, who is blessed to get adorable in-laws, who love her unconditionally. (Also Read: Kajal Aggarwal Kept This Condition Before Marrying Gautam Kitchlu, He Felt It Was Totally Cheesy)

Sana Khan had begun her career in modelling and had appeared in several advertisements, along with Bollywood as well as regional films. In 2012, Sana had participated in the reality show, Bigg Boss and had become a finalist. She had found her 'Mr Right' in a Maulana and had tied the knot with Mufti Anas from Gujarat on November 20, 2020, in a hush-hush wedding. Now, she is enjoying every moment of her married life and her social media handle is proof of the same.

By sharing beautiful pictures of her mehendi and walima, Sana Khan has been treating her fans with glimpses of her happily ever after life. On November 26, 2020, Sana took to her IG stories and shared a glimpse of how she is being pampered by her mother-in-law. She shared a picture of a delicious biriyani being prepared by her saasu ma for her. Sana wrote, “Sasu ma making biryani for me” followed by a heart emoticon atop the picture.

After her marriage to Mufti Anas Sayed, Sana Khan had changed her name to Sayied Sana Khan. On November 24, Sana had taken to her IG handle and had shared gorgeous pictures of her Walima look from her wedding. Sana had looked stunning in a custom hand-embroidered lehenga with dupion crepe and gotta patti border on her dupatta. She had complemented her lehenga with matha patti and heavy jewellery with intricate details. (Also Read: Late Actor, Ashiesh Roy Was All Set To Get Married Two-Years-Back, Reveals His Friend, Sooraj Thapar)

Sana had also shared mesmerising pictures from her mehendi ceremony, looking alluring. She had ditched the traditional floral look for her mehendi ceremony and had looked heavenly gorgeous in an orangish pink short frock kurta with gotta patti work by designer, Poonams Kaurture. She had teamed her kurta with a pink dupatta and a choker set. Looking radiant with a single strand pearl maang teeka, Sana had flaunted her mehendi clad hands. Sharing heavenly pictures, Sana wrote, “Mehendi”.

Before marrying Anas, Sana was in a serious relationship with choreographer, Melvin Louis. In February 2020, Sana’s personal life had hit the headlines because of her alleged breakup with Melvin. After the news of Sana Khan’s hush-hush wedding to a Maulana in Gujarat had come out, people had started comparing her to Sofia Hayat, citing that Sana's spree of spirituality won't last long just like Sofia Hayat's. For the unversed, Sofia Hayat had quit the showbiz in 2016 and had become a nun adopting the name, Gaia Sofia Mother. However, she had quit that path after a year. Netizens had trolled Sana brutally for her decision.

In October 2020, Sana had taken to her IG handle and had shared the news of quitting the glamour world citing religious reasons. The actress had announced her decision by sharing a long letter, in which she had expressed her thoughts and happiness on embarking on a spiritual journey. She had captioned the long letter as "My happiest moment. May Allah help me n guide me in this journey. Aap sab mujhe dua Mai Shamil rakhe." (Also Read: Anita Hassanandani On Her Decision Of Embracing Motherhood At 39, Believes It To Be A 'Woman's Call')

Do you get pampered by your loved ones? Let us know.

Bollywood actress, Sana Khan, who was shot to fame with her brief stint in Salman Khan's Jai Ho and had also appeared in the house of Bigg Boss had shocked everyone with her overnight decision of leaving the showbiz forever. Not only this but after leaving Bollywood, Sana Khan had