After Farah Khan had talked about her decision of embracing motherhood at the age of 43 via IVF, Anita Hassanandani got inspired and reiterated that motherhood is a woman’s choice. There was a time when whenever a woman had tried to make a decision, she was doubted in every step of the way. But fortunately, the times are changing and gone are the days when women were dependent on someone to take her decisions or weren’t allowed to make her own. It doesn’t matter if it is right or wrong, everyone has the right to take their own decisions and be proud if she makes a right one or learn from the mistakes. Be it deciding what career she wants to pursue, when and with whom she wants to get married or when and how she wants to embrace motherhood, it is her call! After Farah Khan had penned a long note on her decision of embracing motherhood at the age of 43 and had encouraged women to opt for IVF, soon-to-be mommy, Anita Hassanandani opened up about her decision of not rushing into having a baby immediately after marriage. (Also Read: Farah Khan On Her Decision Of Embracing Motherhood At Age 43 Via IVF, Proudly Pens An Open Letter)

It was seven years ago when Sindhi girl, Anita Hassanandani had tied the knot with a Telugu guy, Rohit Reddy and the year 2020 not only marks as the completion of 11 years of togetherness for the couple, but also the new beginnings. Anita and Rohit are pregnant with their first child and ever since the to-be parents had announced the ‘good news’ on social media, they have been giving glimpses of their pregnancy journey. Rohit and Anita have made their fans a little part of their journey through this beautiful phase and we are loving every bit of it!

After Farah Khan had talked about her decision of embracing motherhood at the age of 43 via IVF, Anita Hassanandani got inspired and spoke about her experience with people, who had pressured her to become a mother post-wedding. Reiterating that motherhood is a woman’s choice, Anita wrote, “What if I had given in to the people asking me to become a mother just because I was married? Then I would be deceiving myself more than anyone else. It's so important to understand what women want out of their lives and letting them make their choices! @farahkhankunder’s heartfelt letter is another confirmation that I made the right choice to wait till I was ready. Thank you for making us believe that motherhood and reiterating that #ItsAWomansCall.”

Effectively shutting down the incessant talks about women and their 'ticking biological clock', Anita Hassanandani, who conceived at the age of 39, had earlier shared in an interview with The Times of India, “The age-factor did play on my mind. Many people told me that it’s going to be tough, it overwhelms you. But once I conceived naturally, I realised that age is just a number. You need to be mentally and physically fit for everything to fall in place. Jo naseeb mein likha hota hai, woh toh hota hi hai.” Speaking of how she and Rohit had planned the baby when they were ‘ready’ and not when the society 'expected' them to have a child, Anita had said, “Today, Rohit and I feel well-settled — we are financially and mentally in a place where we are ready to have a child.” (Also Read: Sania Mirza Pens A Powerful Letter On Making A Comeback In Tennis After Embracing Motherhood)

A few months from now, i.e., February 2021, Anita Hassanandani and Rohit Reddy will become parents, but the soon-to-be mommy is confused if she is ready or nervous to embrace motherhood. A few days ago, Anita had posted videos on her IG stories, wherein the mommy-to-be could be seen holding a little baby in her arms. While Anita was excited to caress a baby as she envisioned the time when she’ll be holding her own in her arms, she seemed nervous too. Anita had added a poll on her video, with two options, ‘nervous’ and ‘ready’. Check out the screenshots of Anita’s video and let us know what you think if the actress is ready or nervous:

Since Anita Hassanandani has made her fans a part of her pregnancy journey and often posts glimpses of the same on her social media, she revealed in an interview that she was asked to stop posting about her pregnancy. On the show, Bollywood Zoomies With Pallavi, when Anita was asked about that one advice that she is tired of hearing, she had retorted, “A lot of people tell me that ‘nazar lagti hai’, don’t post so much…about being pregnant. You know, once or twice, I got a little conscious. But I believe, at the end of the day what has to happen will happen. It’s my happiness and my joy, and if I want to share it out there, it is my choice! So eventually, me and Rohit took a call that it is something we are comfortable with, there is nothing wrong in it. We are happy and excited!” (Also Read: Anushka Sharma And Mira Rajput Kapoor Flaunting Similar Sunshine Yellow Dresses Won't Cost You Bomb)

We wish a healthy and happy pregnancy to Anita! 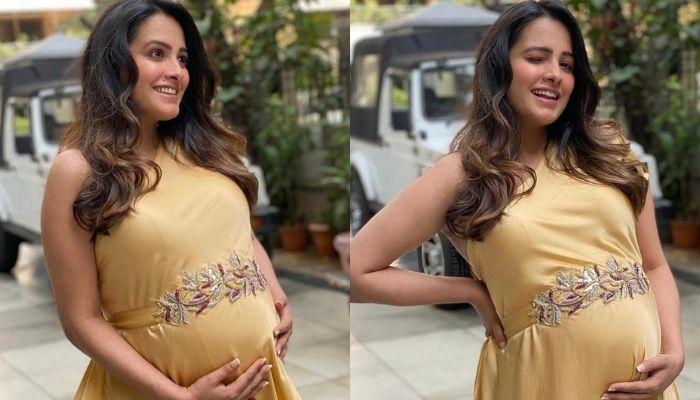