On April 15, 2022, Shilpa Shetty Kundra was spotted in the city with her daughter, Samisha. The little munchkin greeted the paps and won our hearts!

Bollywood actress, Shilpa Shetty Kundra is a diva, who inspires all the people out there to maintain good health and fitness. The gorgeousness is married to businessman, Raj Kundra, and the couple is growing stronger with each passing day. Shilpa and Raj never miss a chance to create happy memories with their kids, Viaan Raj Kundra and Samisha Shetty Kundra.

Shilpa Shetty Kundra often shares glimpses of her happy life on her IG handle and inspires millions of mothers out there on how to keep their kids entertained. For instance, on April 10, 2022, Shilpa had shared a cutesy video of her daughter, Samisha showering kisses on her brother, Viaan. In the video, when someone asked the little munchkin how much she loves her brother, she said, "So much", by spreading her arms. Sharing the video, Shilpa had penned a note, which could be read as:

"There’s no bond quite as special as that of siblings, even if they fight like cats and dogs. They can’t live without each other. Here’s to one of the most unique relationships we can ever have with another person."

On April 15, 2022, Shilpa Shetty Kundra stepped out with her daughter, Samisha Shetty Kundra. The mother-daughter duo was spotted by the paps, and pictures and videos from the same are doing rounds on the internet. In the video, we can see Samisha looking like a princess in a gorgeous off-white coloured frock, featuring a golden belt on the waistline. The little munchkin's hair was tied in a half ponytail, which was adorned with a golden bow. On the other hand, Shilpa donned multi-coloured athleisure wear, which she styled with a white shirt. When the paps bid goodbye to Samisha, the little one replied, "Bye tata", and won our hearts. Check it out below:

On March 23, 2022, Shilpa Shetty Kundra had dropped a cutesy video with her daughter, Samisha on her IG handle. The mommy-daughter duo was seen sitting in an aeroplane and having a conversation in the video. When Shilpa had asked Samisha if she knew where they were travelling to, the little munchkin was heard saying:

On January 12, 2022, Shilpa had posted a video with her daughter, Samisha. In the video, we could see Samisha asking her mother what has happened to the birdie. To which, Shilpa had said that the bird was injured. After which, Samisha had started praying, and she had also recited the Gayatri mantra. Along with it, Shilpa had penned a note and had talked about how kids know the true meaning of prayers. She had written:

"Kids truly have the purest hearts. It’s amazing to see Samisha (who is not yet 2) feel compassion & empathy, and instinctively know when someone needs prayer and some unconditional love. The power of prayer and faith makes the world go round. Wish we remember that more as grown-ups." On the work front, Shilpa Shetty Kundra will be next seen in the film, Sukhee! 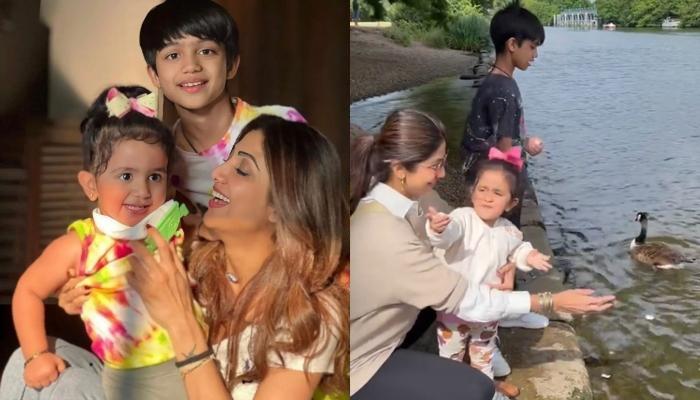 Bollywood actress, Shilpa Shetty Kundra is a supportive wife to her husband, Raj Kundra and a hands-on-mommy, to their two beautiful kids, Viaan Raj Kundra and Samisha Shetty Kundra. She is an avid social media user and keeps on updating her fans with drool-worthy glimpses of her family. Currently, she is in London on a