Sacred Rituals Of A Telugu Wedding That Make It Look So Pure, Holy And Dreamy

Sacred Rituals Of A Telugu Wedding That Make It Look So Pure, Holy And Dreamy 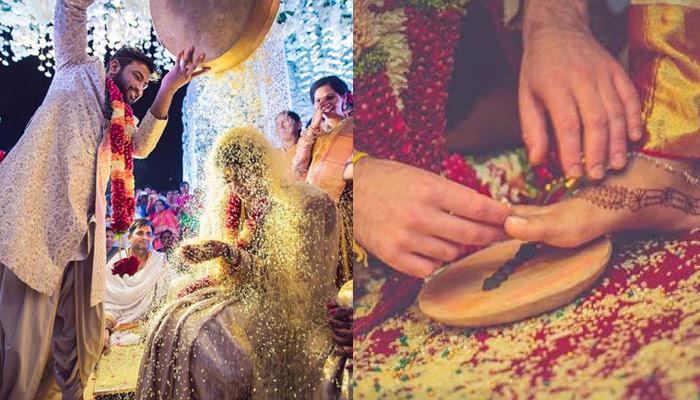 Though every region in the country has a different set of rituals and traditions that they follow in their weddings, Telugu wedding traditions are quite similar to the Tamil ones. Also a unique feature of the Telugu weddings is that they focus mostly on spirituality and not solely on religion.

In a Telugu wedding, functions and rituals are considered to be complete only when women participate in them. They give utmost respect to women and consider women as an equal to men when it comes to marriages and family life. Here are some basic rituals that are involved in a traditional Telugu wedding.

In this ritual, the auspicious wedding day is finalised by the priests in the presence of the elderly family members. Telugu weddings usually do not take place in the months of Aashad, Bhadrapad and Shunya.

More like the haldi ceremony up North, in this ritual, a paste of turmeric and oil is applied to both the bride and the groom. After this, they are required to bathe and wear fresh clothes. The bride’s hair is then adorned with fresh flowers.

Also Read: 6 Reasons Why To-Be Bride And Groom Have A Haldi Ceremony Before Their Wedding

This ritual takes place at the groom's place. In this, he is made to wear the holy silver thread. This is a mark that he is now ready to graduate from bachelorhood and become a family man.

Similar to the Kashi Yatra ritual in the Tamil weddings, here the groom pretends he is off to Kashi for a holy pilgrimage and is no longer interested in worldly pleasures. He is stopped by the bride’s brother who promises his sister’s hand in matrimony to the groom.

This is a ritual that takes place on the wedding morning where the bride and groom take a purifying holy bath after which they attend the aarti.

After the holy bath, the bride and the groom are applied oil in their respective houses. After this, their families perform an aarti and pray for the couple's happy life together. 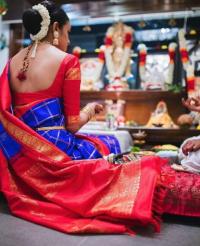 This ritual usually takes place at the bride’s house where she offers her prayers to Goddess Gauri and seeks the deity’s blessings.

Also See: The Lavish Venue Of This Big Fat Gujarati Wedding Was Built In 3 Months

The groom is supposed to perform the Ganesh puja at the mandap before the arrival of the bride to ward off all evils and any obstacles.

Here, the bride and the groom apply a paste of jeera (cumin) and jaggery on each other’s hands from under the curtain. This ritual denotes their inseparable and unbreakable bond.

You May Like: Grand Entry By This Coolest Indian Bride Left Everyone Awestruck At Venue

This ritual is performed by the bride’s parents where after washing the groom’s feet, they offer their daughter’s hand to the groom. The groom promises to love, respect and protect his bride for life.

In this ritual, the bride is made to wear a cotton saree with a red border, while the groom wears a white cotton dhoti with a red border. This is the traditional wedding outfit of the bride and the groom. These colours symbolise their purity and strength respectively. 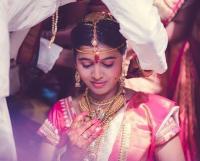 During this ritual, the curtain between the couple is removed and the groom ties a mangalsutra around the bride’s neck with three knots. This signifies their mental, physical and spiritual union with each other.

In this ritual, the bride and the groom pour pearls or turmeric coloured rice on each other’s head. They cup their hands and hold rice in it. The couple then slides the rice over each other’s head as a priest recites mantras.

Here the couple exchanges flower garlands as their friends and relatives shower flowers and turmeric coloured rice on the couple.

In this ritual, the couple takes seven rounds around the holy fire while taking their marriage vows.

After this, the groom puts a silver toe ring on the bride’s toe.

This is similar to the vidaai ceremony in the North Indian weddings. Once the wedding is over, the bride is traditionally considered to be a part of the groom's family from then on. This is a bittersweet moment for the bride and her family.

After leaving her parent’s home, the newlywed couple reaches the groom’s house. Here, the groom’s mother welcomes the couple by performing a small aarti.

Different Telugu communities have different rituals and customs for their celebrations. But generally, Telugu weddings attach a deep spiritual value to whatever customs they may follow. 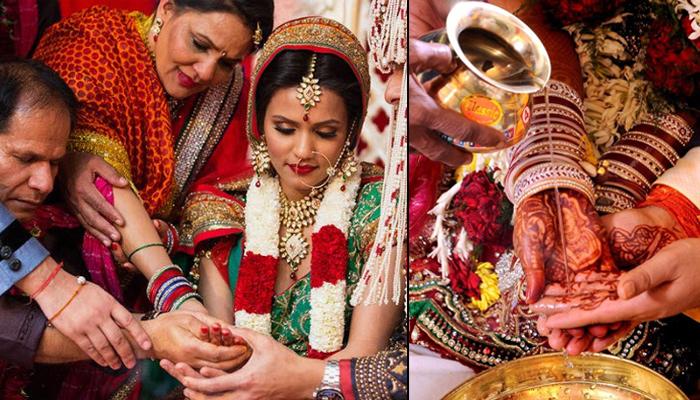 In the Hindu tradition, there are many rituals and customs that are involved in a wedding. While the groom is considered to be an incarnation of Lord Vishnu, the bride is considered to be a form of Goddess Lakshmi, the deity of wealth and prosperity. Therefore, giving the daughter away (or