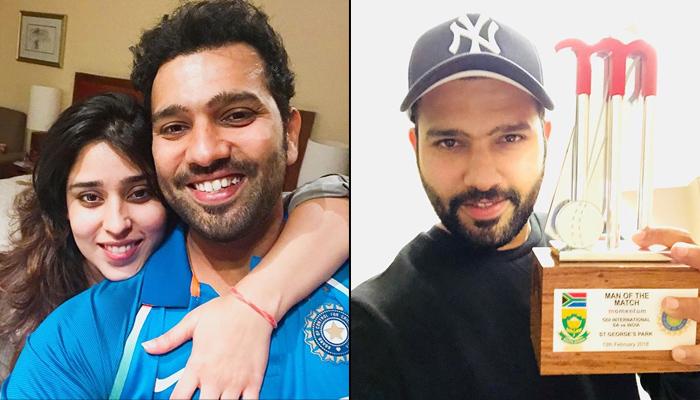 He is not only the star batsman of Indian cricket team, but he is a true gem for his wife as well. Team India opener Rohit Sharma has not only been a great cricketer but also a perfect husband. It seems like he has a penchant for making records on special occasions.

Just like the day of the ODI match between Indian and Sri Lanka, when Rohit smashed double century (which was also his third double century), it was his 2nd marriage anniversary. This was his special gift to his lovely wife, Ritika Sajdeh. Similarly, in the fifth ODI on February 13, 2018, Rohit scored 115 runs, including 11 fours and four sixes, in 126 balls, because of which he was declared the Man of the Match. Because of Rohit, Team Blue became the first Indian team to register a bilateral series win on the South African soil.

After his remarkable performance on-field, Rohit dedicated his MoM award to his lady-love. This is not the first time when Rohit has given everyone major couple goals. And on the day of romance and love (Valentine’s Day, February 14), Rohit gave the best gift to his wife. He posted a picture of himself posing with the trophy, and captioned it, “Happy Valentine’s Day Rits @ritssajdeh”. On the other hand, his lovely wife too acknowledged her hubby’s victory on her Instagram handle.

After he scored his third double century, his wife became emotional and was in tears. Rohit was happy that his wife was there with him on such an important day, as she has always been his strength. Rohit was quoted as saying after the match, "I'm happy my wife is here with me on this special day. I know she would have liked this gift from me. She has been my strength. She has always been there for me. You go through so much stress in this sport and having them around is always special." He further added, "This is our second anniversary, but more than that, we won the game. We were determined to do the right things in the middle, and right till the end we did that. As a group, we are looking forward to Vizag."

And once again, he has proven that he totally deserves all the praises and awards. Making such a sweet gesture for his wife on Valentine’s Day, he has given husband goals. Just like his sweet gestures, Rohit and Ritika’s love story is also very heartening. Ritika was Rohit’s sports event manager and she used to take care of his cricket engagements. This is how they became friends and soon their friendship blossomed into love. He proposed her with a solitaire ring and announced his engagement on social media with the tweet, “From best friends to soulmates, couldn't get any better.” Since then they lived happily ever after. Ritika is seen cheering her hubby during his matches.

Ritika and Rohit are a made-for-each-other couple. Congratulations Rohit for the MoM trophy.

Next Read: Gautam And Pankhuri Celebrate Valentine's On Their Honeymoon At God's Own Country Kerala (See Pics)