Legendary actress, Rekha gives a hilarious reply when asked to pose alongside a portrait of Amitabh Bachchan at Daboo Ratnani's calendar launch. Take a look! 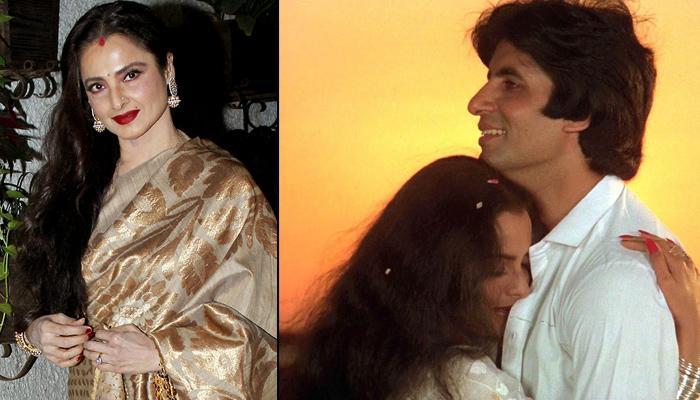 Over the years, Bollywood industry had witnessed a lot of rumoured relationships but if we have to pick one affair that is still ruling the industry then it is surely, Rekha and Amitabh Bachchan. The love story of these two legends of Bollywood had started on the sets of the film, Do Anjaane (1976) when Amitabh was already a married man. By the end of the 70s era, Rekha and Amitabh Bachchan’s love affair had made its way into the cover stories of reputed magazines and newspapers. Their on-screen chemistry was beyond the measures of any rate-o-meters, and soon their off-screen chemistry too became the talk of the town. (Recommended Read: Taimur Ali Khan Adorably Looks At Arhaan Khan, Malaika Arora Shares A Cute Picture Of 'Khan Boys')

On one side, where Amitabh Bachchan had never confirmed his affair with Rekha, the actress had revealed in an interview with Filmfare in November 1984, that she respects Amitabh Bachchan's decision of hiding their relationship. She had revealed, “Why should he have not done it? He did it to protect his image, to protect his family, to protect his children. I think it is beautiful, I don’t care what the public thinks of it.” Well, over the years we have seen Rekha taking over her relationship gossip with Amitabh Bachchan in a sporting way. One such occasion came recently at the annual calendar launch of Daboo Ratnani.

On February 18, 2020, the veteran actress looked ravishing in her white outfit, resplendent jewellery, and trade-mark red lips at the famous photographer, Daboo Ratnani’s annual calendar launch. The event was graced by many A-lister of Bollywood and we saw the stunningly beautiful pictures of a lot of Bollywood superstars such as Shah Rukh Khan, Saif Ali Khan, Aishwarya Rai Bachchan, Amitabh Bachchan, Vicky Kaushal, and many more. But the unforgettable moment of the whole event came when Rekha was posing for the shutterbugs. As walking towards a corner with Dabbo Ratnani's daughter, she realised it that there’s a portrait of Amitabh Bachchan hanging at that side. The actress quickly went back while saying "Yaha Danger Zone Hai." Take a look. (Also Read: Deepika Padukone Shares First Look Of Romi Dev From Ranveer Singh's '83' With An Ode To Every Woman)

Isn’t this hilarious? Well, this isn’t the first time when we are seeing Rekha taking care of not posing with Amitabh Bachchan’s portrait. Last year on January 29, 2019, Rekha had attended the calendar launch of Dabboo Ratnani. However, the actress didn’t shot for the calendar last year, she made sure to pose against the picture backdrops. But when she had realised that one of the photos behind her is of Amitabh Bachchan, the reaction that came out was hilarious. Check out the video here:

In an interview the Filmfare on Filmfare in November 1984, Rekha had explained the reason behind Amitabh Bachchan’s silence on their relationship. She had said, “Why should the public know of my love for him or his love for me? I love him, he loves me – that’s it! I don’t care what anybody thinks. If he’d reacted that way towards me in private, I would have been very disappointed. But has he ever done that? I ask you. So why should I care about what he’s said in public? I know people must be saying bechari Rekha, pagal hai us par, phir bhi dekho. Maybe I deserve that pity. Not that he has 10 rollicking affairs! Mr Bachchan is still old-fashioned. He doesn’t want to hurt anybody, so why hurt his wife?”

In the same interview, Rekha had also requested media not to bake their affair news time and time again because Amitabh Bachchan isn’t going to confirm them ever. She had added, “We are human beings who love and accept each other for what we are. There’s more happiness in our lives than misery. Nothing else matters. But as long as I’m with that person, I don’t care. I cannot identify me with anyone else. Don’t publish this. For he’ll deny it. Then I’ll affirm it. Then there will be a statement from his camp saying, “No, no. she is nuts like Parveen Babi.” Then I’ll say “No, no. Parveen Babi is not here, but here I am to issue a statement.” Anyway, why should I be talking to you about my personal life? People love talking about my personal life. But I want to keep it to myself. Mr Bachchan is important to me, not to anybody else.” (Don't Miss: Shefali Jariwala Of 'Bigg Boss 13' Expresses Her Wish To Embrace Motherhood, Wants To Adopt A Girl)

There’s no denying, Rekha is a diva in every way! What do you think?