Every father's dream is to see his little princess as someone else's queen and so was Priyanka Chopra's father. Scroll down as the actress reveals his wish! 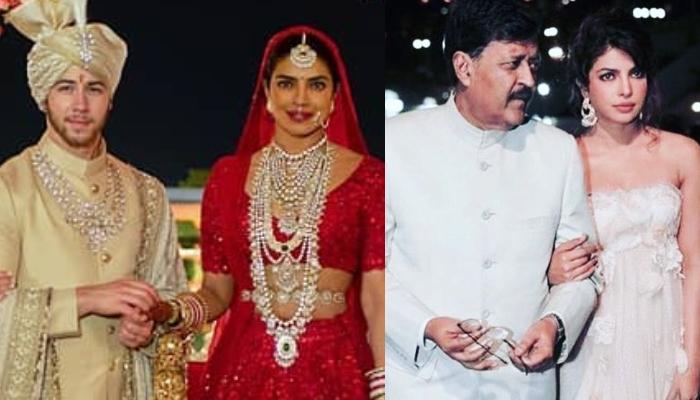 For a father, his daughter is always his 'little girl' and he strives hard to give her the best in the world. And while a mother teaches her daughter life's lessons, it is her daddy, who teaches her how to stay strong in tough times. And Bollywood diva, Priyanka Chopra shared an exactly similar relationship with her late father, Dr Ashok Chopra. (Recommend Read: Pooja Gor Wishes Her Boyfriend, Raj Singh Arora On His Birthday, Amidst Breakup Rumours)

Six years ago, Priyanka lost her father to cancer after a long battle. His death came as the lowest point in the actress' life and as a token of love, she got her wrist inked with a tattoo that says 'Daddy's lil girl' in her father's handwriting. In many interviews, Priyanka had shared how she still hasn't digested the fact that her father is no longer with her. He was her saviour, her protector and her biggest idol.

Recently, in an interview with Zoom, Priyanka revealed her father's wish. And like every father, Mr Chopra also dreamt of seeing his little princess as someone's queen. The actress shared, "I was getting married during this movie and I missed my dad so much at that time. I missed his presence so much knowing that my mom would be doing it all alone when it was all that my dad wanted and would keep saying ‘Main suit kab silwaau, main suit kab silwaau’. It was very prevalent in my brain at that time and this definitely helps me heal."

She further added, "I don’t think I knew how to deal with all the emotions I was feeling. Under the tutelage of Shonali (Bose), I was playing Aditi and understanding that death is the most natural thing that we know will happen to each one of us. Instead of mourning the person you have lost, you celebrate the life that was lived." (Also Read: Karisma Kapoor Gives A Jhalak Of Her Being 'Papa's Girl' In A Throwback Picture With Randhir Kapoor)

In a throwback interview with TellyChakkar, Priyanka had reminisced about her childhood memories, and had said, "My dad is really tall. And I was just 2 or 3. I’d always try to pass through his legs and he’d clamp my neck as I did so. My earliest memory is of me howling because my Dad wouldn’t let me pass through his legs. He had a bike which I loved to take rides on."

The actress had further talked about her 'daddy dearest', and had stated, "My dad was in the army so we were always on the move. He taught me to drive at 13 when he’d take me to school. I was very scared of driving. My dad used to be a doctor in the army until he took voluntary retirement in 1997. He’s a trained artist, painter and singer. He used to be called the singing surgeon. He used to do shows for the army. I’ve inherited a fondness for singing from my dad. One of my earliest memories at 3 is of my dad on stage looking at me and singing. If he didn’t look at me and sing I’d get extremely miffed. Sometimes he used to call me up on stage to sing an African song that I knew." (Don't Miss: Mahhi Vij Shares An Adorable Picture Holding Her Little Angel, Tara Jay Bhanushali's Hand)

Well, Priyanka is a strong woman, all thanks to her later father, Dr Ashok Chopra!