Bollywood actress, Poonam Pandey's husband, Sam Bombay has been arrested after she has filed a complaint against him for allegedly molesting, threatening and assaulting her.

Poonam Pandey is known for her controversial statements and bold career choices. She has started off her career as a model and had featured on many magazines. However, she has gained a lot of attention when she had started posting semi-nude pictures on her social media handles. It was in the year 2011, when she had made the headlines when she had promised to strip if team India had won the World Cup. However, she never did that as she had claimed that BCCI had denied the permission. (Recommend Read: 'Baa Bahoo Aur Baby' Fame, Sucheeta Trivedi Reveals Her Gift For Hubby On 2nd Marriage Anniversary)

In the year 2020, Poonam Pandey again gained a lot of attention when she had found her prince-charming, Sam Bombay. On September 10, 2020, Poonam had shared her wedding pictures with Sam Bombay. Alongside the picture, she had written, "Here’s looking forward to seven lifetimes with you." Check it out below: 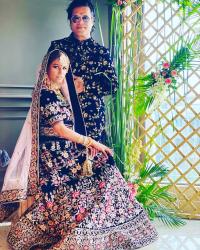 However, when we thought everything is going good in Poonam Pandey's life, we got the news of her husband, Sam Bombay's arrest under the molestation complaint made by the actress. According to a report by the Hindustan Times, Sam Bombay was arrested on Tuesday in Goa after she filed a complaint claiming he had molested, threatened and assaulted her. The incident had happened in Canacona village in south Goa where Poonam is currently shooting for a film.  A police official said, "Pandey filed a complaint late Monday night claiming her husband Sam Bombay had molested her, and threatened her with dire consequences after assaulting her. He was arrested." (Also Read: Ali Fazal Supports Richa Chadha As Her Name Was Dragged In #MeToo Allegation Against Anurag Kashyap)

For those who don't know, Poonam and Sam were in a live-in relationship for around two years. They had tied the knot at their Bandra home in the presence of close family and friends. On August 2, 2020,  Poonam had shared a friendship day post for Sam. She had written, "You bring the sunshine, I’ll bring the wine. You are my best friend. Happy friendship day.” In an interview with the Man’s World India, Poonam had shared her thoughts on relationship, and had said, "I don’t think like that. I would rather be with just one man forever. I think everyone should be like that. It is not a new generation thing, I think it is stupidity when people talk about multiple relationships. I think every person wants love. It is not about sex, if you love someone everything happens." (Don't Miss: Rhea Chakraborty's Custody Extended Till October 6, Deepika Padukone's Manager Was Summoned By NCB)

Well, we hope everything get sorted in Poonam Pandey's life!