Payal Ghosh had accused filmmaker, Anurag Kashyap and in her #MeToo allegation, she had also taken the names of Richa Chadha, Huma Qureshi and Mahie Gill.

When you are in a relationship, it is the quality that needs to be focused and not the quantity. It won’t matter if you have been in a half a century long relationship but growing in and with love, selflessly and unconditionally is what matters the most. Being one another’s rock of support and standing by your partner’s side through thick and thin is the sign of an ideal relationship. In the glamour world, we have seen how celebs stand by their partners’ side when they are targeted with hatred on social media and are trolled or accused of something. While some abide by ‘ignorance is a bliss’, some believe in giving it back with a powerful message. Fukrey couple, Ali Fazal and Richa Chadha believe in fearlessly pointing out the right and wrong! (Also Read: Babil Slams Troll Who Said His Baba Irrfan Khan Would Be Ashamed Of Him For Defending Anurag Kashyap)

On September 19, 2020, Payal Ghosh had accused filmmaker, Anurag Kashyap for forcing himself on her and soon, he had released a statement by his lawyer, Priyanka Khimani stating the allegations levied against him to be completely false. In her #MeToo allegation on Anurag, Payal had also taken the names of Richa Chadha, Huma Qureshi and Mahie Gill. 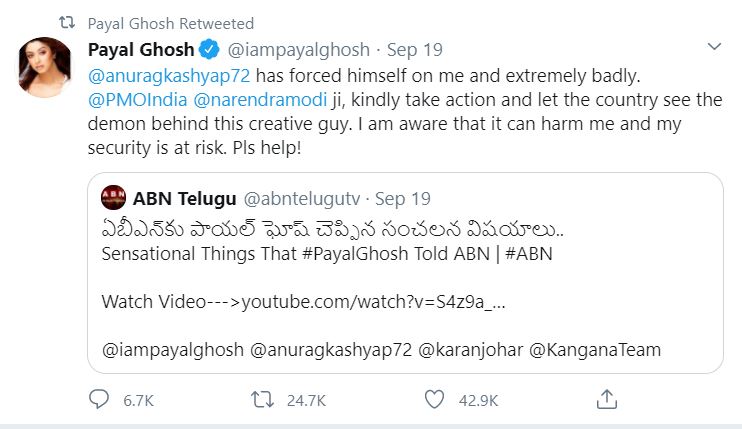 Richa Chadha released her lawyer’s statement that condemns the act of falsely dragging her name into controversies. The statement reads, “Our Client ‘Ms. Richa Chadha’, condemns the act of her name being unnecessarily and falsely dragged in a derogatory manner into controversies and allegations being recently raised by third parties. Though our Client believes that genuinely wronged women should get justice at all costs, there are legislations that are intended to ensure that women have an equal standing in their workplace and to ensure that they have a cordial workplace in which their dignity and self-respect is protected. No woman should misuse their liberties to harass other women with unsubstantiated or non-existent, false and baseless allegations. Our Client has initiated appropriate legal action and shall further pursue her legal rights and remedies in law as may be advised in her best interest. Sd/- Adv Saveena Bedi Sachar, Lawhive Associates’.” 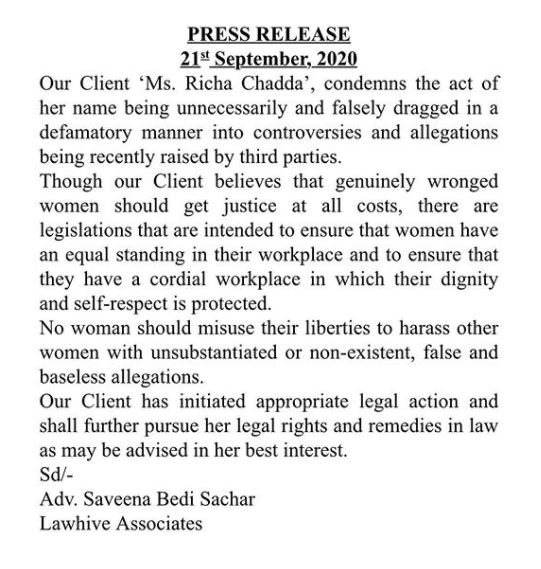 Richa Chadha’s beau, Ali Fazal reposted her story on his IG handle with a long powerful note to support his ladylove. Speaking about all that Richa has done for the society, Ali wrote in the caption, “My love, you, who has stood up for women time and time again, today had to go through this ordeal. And yet, you come out strong as ever. My partner, your resilience, your kindness, and empathy have touched many people, and I have had the fortune of being witness to that over the time I’ve known you. The battles you’ve fought to create an equal society which isn’t fractured by hate. And within that to be able to champion women all along ... and keep your art at par with the best, takes courage and nerves of steel. I am so proud of you because i know you won’t stop standing up for those in need, especially women who’ve lost their voices within the many patriarchal set ups we face today the world over.” (Also Read: Anurag Kashyap's Ex-Wife Kalki Koechlin Slams Sexual Assault Claims Against Him With A Powerful Note) Concluding his note by clarifying the reason behind supporting Richa Chadha to be ‘people like her make the world a better place’ and not because she is his fiancée, Ali Fazal wrote, “I believe every voice must be heard. I believe in dissent. But I also believe in the power of truth and justice. They indeed prevail. I believe in using our right to speak up but with utmost responsibility. I believe that we as a society need to empower our women so that their fearless voices echo in all its glory and yet with care and gentleness. I say this today, not because you’re my partner but because people like you make the world a better place and we need you. Love you. With you. Always.” To which, Richa had commented, "Grateful for you! Today and always". 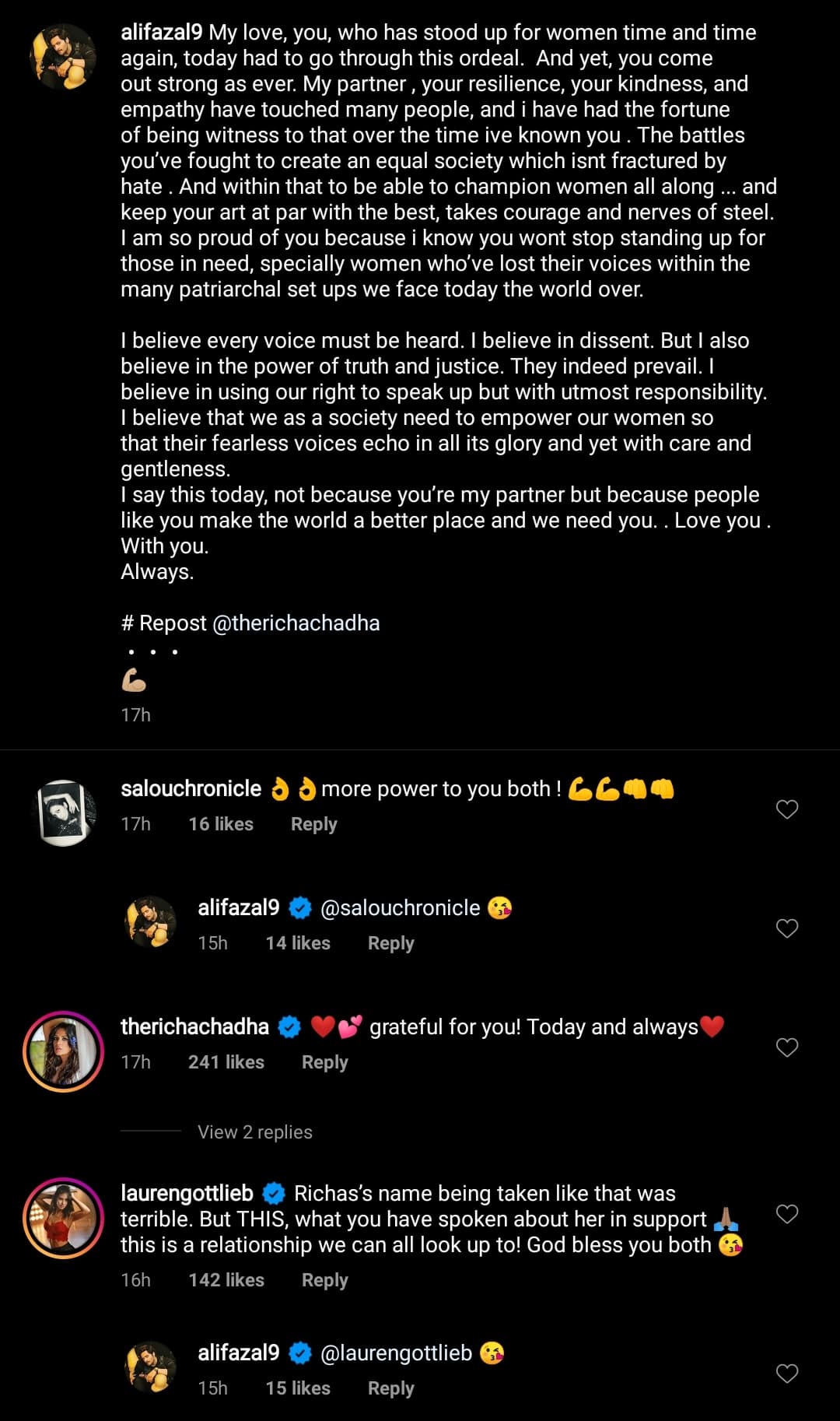 Payal Ghosh had claimed in her media statement that Anurag Kashyap had told her that female actors like Richa Chadha, Mahie Gill and Huma Qureshi would perform sexual favours for him and he expected the same from her. In an interview with Bollywood Hungama, Payal responded to Richa’s legal notice and said, “Whatever it is, it is her stand. I didn't say anything. That is not my version, that is what Anurag Kashyap told me. I said what he told me. I didn't know him. I didn't know the other girls. I don't have any idea about the others. I didn't even know them personally, so Why should I take their name? Who are they? There is no question of anybody's name from my side. It is him who told me. Whatever he told me, not only about them, but about every word he has said I spoke about it. He also said about them so that is exactly what he told me that I said. I have nothing to do with them personally. I just said each and every thing, even the good things he said about people, whatever he told me in the two days I went to his house. I don't have any personal grudge against anybody. I don't know anybody.” Saying that Richa Chadha must ask Anurag Kashyap why he had taken her name, Payal Ghosh continued, “She (Richa Chadha) should go and ask Anurag Kashyap why did he take her name. Because I am a girl and I don't have such influential support that doesn't mean I am the one talking about everything and because he is influential and he has launched them he is very good. They themselves must be knowing from the heart what kind of person he is. And I don't want to, that is their own experience. I have just shared my experience.” (Also Read: Anurag Kashyap's First Wife, Aarti Bajaj Gives A Befitting Reply To The Sexual Assault Claims On Him) On the professional front, Richa Chadha had worked with Anurag Kashyap in her breakout film, Gangs Of Wasseypur.