The entire team of 'Kasautii Zindagi Kay 2' has jetted off to the dreamy Switzerland. Rumoured couple, Erica Jennifer Fernandes and Parth Samthaan looking dapper as they left the country. 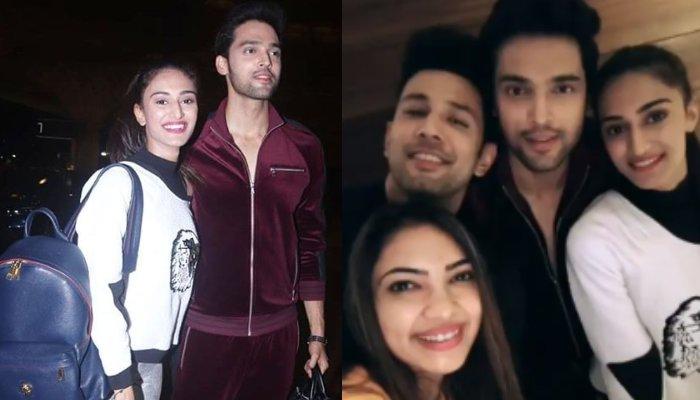 Chahat Ke Safar Mein, Dilon Ke Hosle Dekho, Yeh Aksar Toot Jaate Hain, Kabhi Aansu Bahate Hain, Kabhi Chalte Hain Sehra Mein, Phir Bhi Mushkurate Hain, Imtehaan Har Ghadi Ki, Kasautii Zindagi Ki, Kasautii Zindagi Ki… our hearts skipped a beat when Babul Supriyo lent his voice once again to this soulful track with a red dupatta flowing in the background and how we had loved it! The very thought of Anurag, Prerna, Komolika and Mr Bajaj returning to our television screens had made the teensy-weensy butterflies flutter in our stomach. And when we finally saw the end result, we loved it! (Do Read: Alia Bhatt And Ranbir Kapoor Spotted Spending Some Alone Time In New York)

A series of track changes, terrific acting, gigantic sets and every character having their own significance, Kasautii Zindagi Ki 2 is loved by many. While Hina Khan’s entry as Ekta Kapoor’s Komolika had made us drool over her beauty, her exit from the show had also made a huge difference but we are overjoyed to see her back on the daily soap. And as per reports, that is exactly why the makers of the show decided to welcome on board the salt-and-peppery, Mr Bajaj. After a lot of speculations, it came about that Karan Singh Grover will go on to play the iconic character. The reports also had it that a large portion of Mr Bajaj’s sequences will be shot at the dreamy Switzerland. And thus, the entire team of Kasautii as jetted off to the mountainous Central European country.

For the same, shutterbugs grabbed rumoured lovebirds and leads of the show, Erica Jennifer Fernandes and Parth Samthaan looking dapper as they left for Switzerland with their entire team. While Parth sported a comfy maroon velvet tracksuit, Erica had looked uber cool in a white one-shoulder sweatshirt which she had teamed with silver pants. The stars themselves, including Erica, Parth, Pooja, Karan and Sahil amongst others, had posted pictures and glimpses from their in-flight moments. Take a look at the same here:

A Catch News report had quoted a source telling more about the team’s Switzerland shoot. It had shared, “The team will be flying to Switzerland to shoot for Bajaj's entry in the first week of June. The date for the travel is yet to be certain but the team is working day in and out to make sure the big shift in the storyline is executed well.”

Rohit Roy was Ekta Kapoor’s Mr Bajaj in her previous version of Kasautii Zindagi Ki. About Karan Singh Grover bagging his role for its sequel, Rohit had shared with SpotboyE, “I'm very happy for Karan bagging the role of Bajaj. I think he'll do a great job. My good wishes are with him. May he and kzk2 attain much greater heights of popularity than I did.” He had also added, “People still do call me that. It goes without saying that it was one of my iconic and career-defining roles.” (Must Read: Taimur Ali Khan's Happiness Knows No Bounds As He 'Swings' His Way Into The Weekend In London)

Talking about the show’s leads, Erica Jennifer Fernandes and Parth Samthaan, this duo is rumoured to be dating each other. A SpotboyE report had once quoted a source saying, “It seems that Erica and Parth are now more than just good friends, say the sources we have parked on the sets of Kasautii Zindagii Kay 2. There are hushed whispers on the sets of this Ekta Kapoor show that Erica and Parth have probably developed romantic feelings for each other.” Also do you remember the snippets we had shared with you about Erica’s 26 birthday, when she and her rumoured beau, Parth had taken a mini-vacay to celebrate her birthday in Mussoorie? In case you had missed the same, take a look at the pictures below:

Not just one report, The Tribune had also quoted a source as saying, “Parth and Erica have been inseparable and are always together. They both arrive on the set together and wait for each other’s pack-up to leave together. They are very fond of each other and clicked since the day they met. Parth is always in Erica’s make-up room and they find their way to each other even in between shots. Parth also went to meet Erica’s family and they seem to adore him.”

Erica Jennifer Fernandes, who never gives in to rumours, recently blurted out the truth about her and Parth Samthaan’s relationship to the Hindustan Times. She had shared, “It is news to me that such rumours are out there. But, I guess, rumours are a part and parcel of the entertainment industry. I have known Parth since we started working together on our TV show and we shoot every day. We are good friends and have a great working relationship. Whenever we chill together, we have a whole bunch of people with us. When we go for events, we are often leaving from our set, so yes, we do leave together. That doesn’t mean we go home together. In fact, we live in different parts of the city.” (Also Read: Asha Negi And Rithvik Dhanjani Are Redefining Love On The Streets Of London, Pictures Inside)

Guys, how do you like their pictures? Let us know!