Over the one-and-a-half-years, we have seen Taimur Ali Khan’s fascination with swings, be it running towards it as soon as he steps down in his playground or just having his ‘me’ time in his balcony. 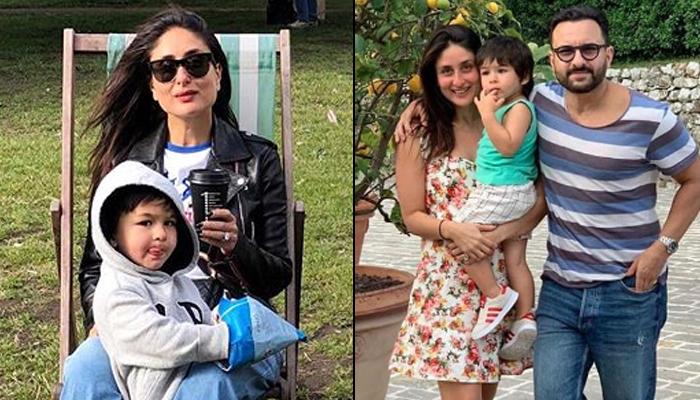 Be it Taimur Ali Khan simply looking at the paparazzi or strolling with parents, Kareena Kapoor Khan and Saif Ali Khan. Be it baby Tim attending a wedding, hanging out with everyone at their house party or enjoying a horse ride and a playdate with his cousin baby sister, Inaaya Naumi Kemmu. Every move of chote Nawab, Taimur Ali Khan makes it to the headlines within minutes and with each passing day, the fascination with baby Tim just continues to grow. (Also Read: Rajinikanth's Grandson Ved Imitating His 'Petta' Pose Will Make You Say 'Like Grandpa Like Grandson')

Saif Ali Khan, Kareena Kapoor Khan and Taimur Ali Khan along with the Kapoor clan including Babita, Karisma Kapoor and her kids, Samaira Kapoor and Kiaan Raj Kapoor, are making the most of their work-cum-leisure vacation in London. While Saif is busy prepping up for his upcoming film, Jawaani Jaaneman, Kareena is shuttling between London and Mumbai for her professional commitments. And the rest Kapoor-Pataudi clan is having their fun time in the capital of England, which also included celebrating Karisma’s 45th birthday.

Over the one-and-a-half-years, we have seen Taimur Ali Khan’s fascination with swings, be it running towards it as soon as he steps down in his playground or just having his ‘me’ time in his balcony on swings. Even in London, baby Tim enjoys his playground time on swings and the happiness on his face knows no bounds, sitting and posing for the camera. Dressed in a green t-shirt and printed shorts, this grey-eyed munchkin takes us yet again with his easy-breezy smile and cute little cheeks!

In June 2018 too, Saif Ali Khan, Kareena Kapoor Khan and Taimur Ali Khan had taken a trip to London and had drooled us with their pictures and videos. In one of the pictures that had gone viral on social media, Taimur could be seen enjoying a carousel ride with his parents, Saif and Kareena. While Bebo was dressed in a blue top and denim with a black leather jacket, Saif had donned a blue shirt and a purple sweater which he paired with a brown coloured beret hat and had looked classy! Their cotton ball, Taimur too, wore a red checkered shirt, denim and a sleeveless jacket. (Also Read: Dimpy Ganguly's Daughter Reanna's 3rd Birthday Bash Will Remind You Of Old-School 90s Celebrations)

A while back, a happy photo of Karisma Kapoor, Kareena Kapoor Khan and Saif Ali Khan in London went viral on social media, and it was shared by designer, Mayyur Girotra. When MissMalini got in touch with the designer, he revealed the story behind the picture and had said, “I was chit-chatting with Lolo (Karisma). I’ve dressed her a couple of times. She was even there for my Mumbai store launch. I have dressed her up for a few of her other events. She has worn my outfits a couple of times. We were chit chatting and then we clicked this photo. It was in Mayfair Park. They were all chilling together. Saif was playing with Taimur (Ali Khan). We then clicked this photo, just for the memory. We stood together and one of their helps clicked this picture for us.”

This royal Pataudi family manages to give us at least one photograph or video every week to adore on. While Saif Ali Khan had begun prepping for Jawaani Jaaneman in London, reports were rife that Kareena Kapoor Khan too, will make a cameo in the film. And looks like, baby Tim is also having fun with his parents on the sets of the film! A few days back, a video of Taimur went viral wherein he just can’t let go of his abba, and we love how every time he clung on to Saif’s legs. Here’s the video:

A while back, Taimur Ali Khan rang the weekend in the sweetest way possible i.e., by spending time with his super-cool uncles, Armaan Jain and Aadar Jain. If the pictures and videos of baby Tim were anything to go by, then he had quite the time! Dressed in an orange t-shirt and white checkered shorts, Taimur enjoyed his fun-time with mamu, riding on the swing and laughing off at his uncle's antics. (Also Read: Kareena Kapoor Khan And Karisma Kapoor Twin In Black As They Party With Saif Ali Khan In Nawab Style)

Well, we surely cannot get enough of this superbly amazing Nawab family and their London vacay!