We have hardly gotten over Isha Ambani and Anand Piramal’s wedding when the world is going to witness another Ambani wedding bash. Yes, Isha’s twin brother, Akash Ambani is all set to get married to his long-time sweetheart, Shloka Mehta in a big fat wedding on March 09, 2019. While we will definitely share the details with you later, a question for all of you: How excited are you to witness another wedding full of fun, glamour, glitz and galore? We surely are! (Do Read: Madhuri Dixit Teased Son Arin With This Hilarious Statement When He Asked Her To Teach Him Hip-Hop)

Wedding shopping has begun in full swing for the Mehtas as Shloka, along with her mom, Mona Mehta, was recently papped outside a plush store. Also for the uninitiated, Shloka and Anant’s wedding date is out! The couple will enter the bond of holy matrimony on March 09, 2019. An India Today report contained details of the wedding, which could be read as, “The Mangal Baaraat will assemble at the Trident in Mumbai at 3.30pm on Saturday. From the Trident, the baaraatis are to leave for the Jio World Centre in Bandra Kurla Complex. A high tea will be hosted for the guests at Jio World Centre at 6.30pm on March 9. Akash and Shloka's wedding ceremony will take place at 7.30pm.” Apart from this, a wedding reception would be held on March 10, 2019, for people belonging to the world of business, Bollywood, politics and cricket. The Ambanis offering the first wedding invite to Lord Ganpati at the Siddhivinayak temple is not unknown to you. In the similar lines, Nita Ambani, along with hubby, Mukesh Ambani and son Anant Ambani were captured by the paparazzi at the Siddhivinayak temple today, who had gone to offer the first wedding invite of Akash and Shloka to Lord Ganpati. Here’s an image and a  video of the same: 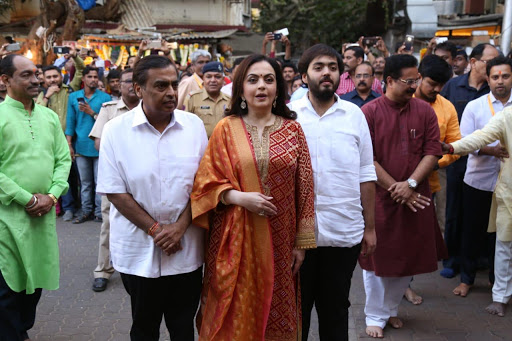 Amazing, right? On June 6, 2018, Akash’s mommy, Nita Ambani and brother Anant Ambani went to the famous Siddhivinayak Temple to offer the formal engagement card of the couple. Akash Ambani and Shloka Mehta’s engagement card includes their names. It reads, “You are the light in our Akash, You illuminate our every Shloka”. By the way, did you see Akash and Shloka’s simple yet elegant engagement e-invite? Checkout the same here: (Must Read: Rajinikanth's Daughter, Soundarya Is Now Married To Vishagan, Father Rocked The 'Sangeet' Floor) 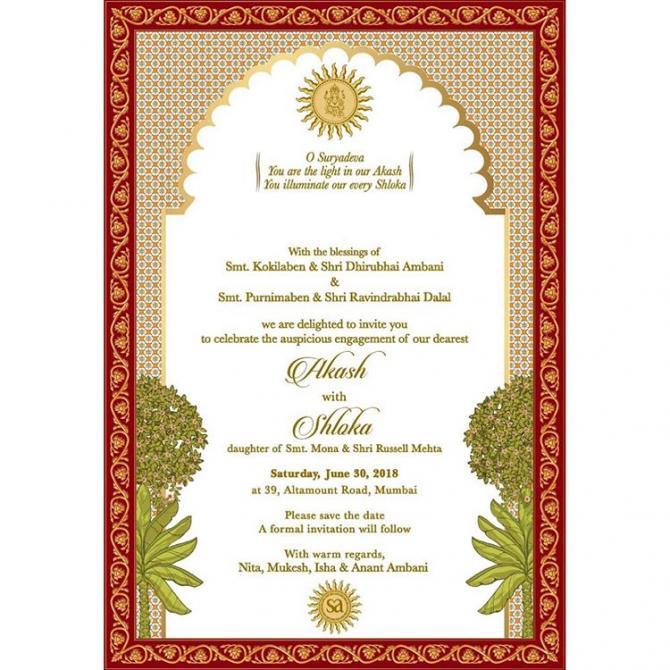 Very recently, celebrity stylist, Tanvi Borkar, posted an unseen picture of Shloka clad in a red and ash lehenga by celebrity designer, Anamika Khanna. The soon-to-be-bride wore minimum accessories, with her hair neatly tied in a ponytail. With blushed cheeks and an almost no-makeup look, needless to say, Shloka looked ethereal! What further accentuated her look was the simple mehendi in her palms, which surely gave us a mini-glimpse of her wedding look. Also in the same backdrop, another picture was posted which witnessed the beautiful diva, donning a cream Abu Jani-Sandeep Khosla outfit, which she accessorised with green-coloured jewellery. Take a look at the pictures: 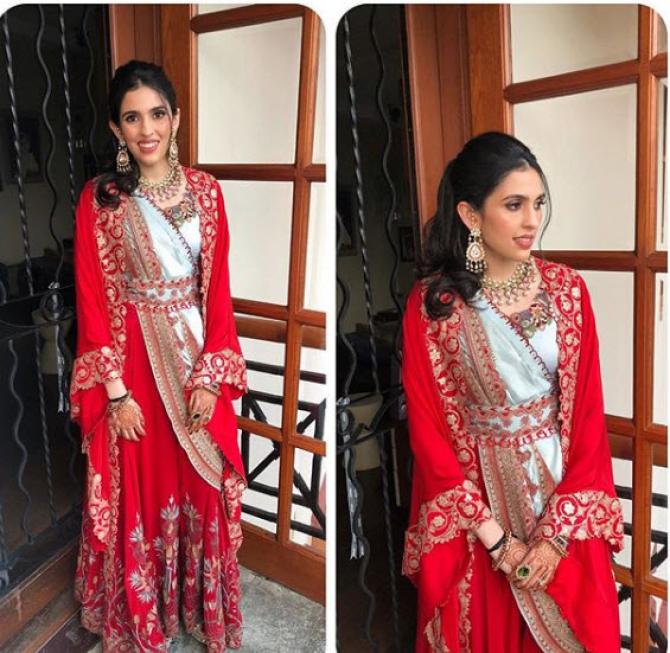 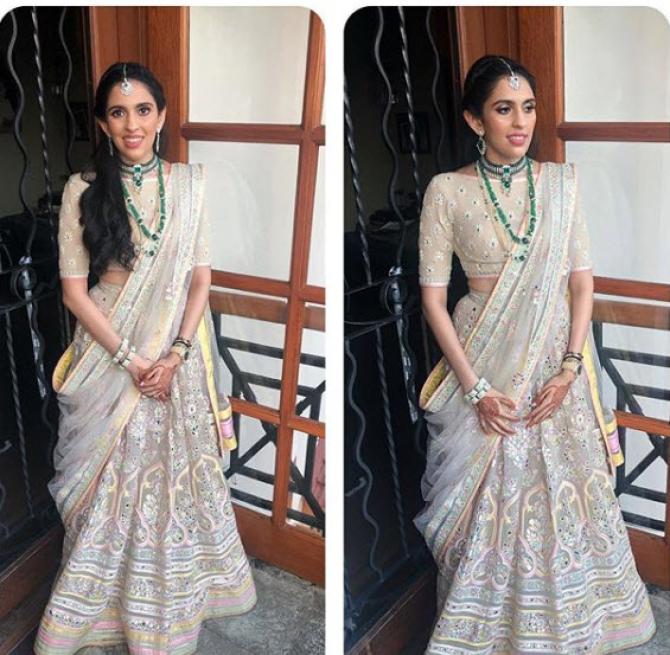 Akash and Shloka had officially gotten engaged on June 30, 2018, with many who’s who of the tinsel town attending their do. Priyanka Chopra, too, had attended the function and posted a beautiful picture along with the caption, “Congratulations Akash and Shloka!! Such a beautiful ceremony.. mehendi hai rachne wali.. love you both. Pre pre engagement party.” Here’s the picture: In an interview to an online portal, the to-be Ambani bahu had shared, “Despite years and busy schedules, we have always found ways to stay connected. Akash is incredibly grounded, and we share a bond based on meaning and memories. We don't just get along - we also support each other's hopes and aspirations and are determined to build a sense of purpose into our lives together. We are lucky to have a love that began with being best friends and luckier still to have such supportive families”. (Also Read: Sunny Leone And Daniel Weber Celebrate Twins Asher and Noah's 1st Birthday With 'Cake Smash' [VIDEO])

While Akash shared, “I am truly happy that our friendship has blossomed into love and Shloka and I are getting married, she is a truly special and extremely kind-hearted person”. In another interview with a leading media portal, Nita Ambani, post-Akash and Shloka’s proposal had said, “I have known Shloka since she was four and we are all delighted to welcome her to our home and our hearts”. A source close to the family had revealed, “Shloka is a very charming girl, extremely cultured and it’s difficult to say which of the two families is lucky with this upcoming marriage”. 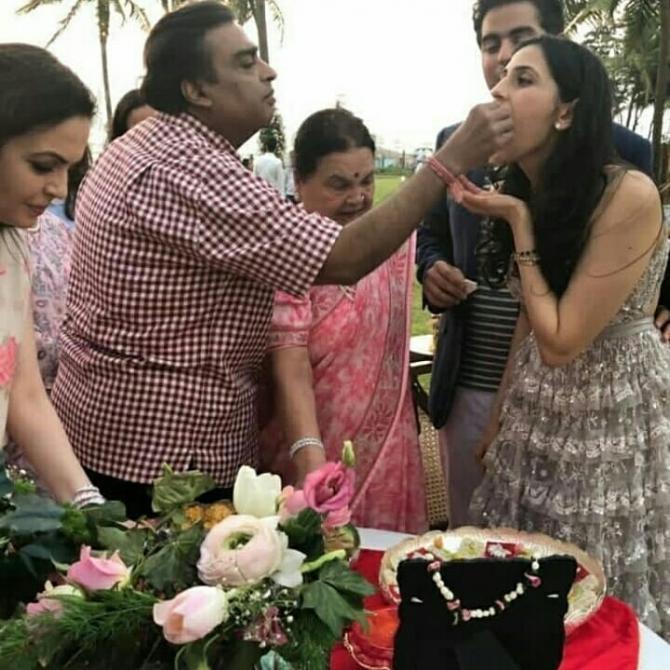 Are you all geared up for another big-fat, Ambani wedding? Keep us posted!