Priyanka Chopra and Nick Jonas celebrated two years of their Hindu wedding on December 2, 2020. The lovely couple penned adorable wishes for one another with some unseen wedding pictures. 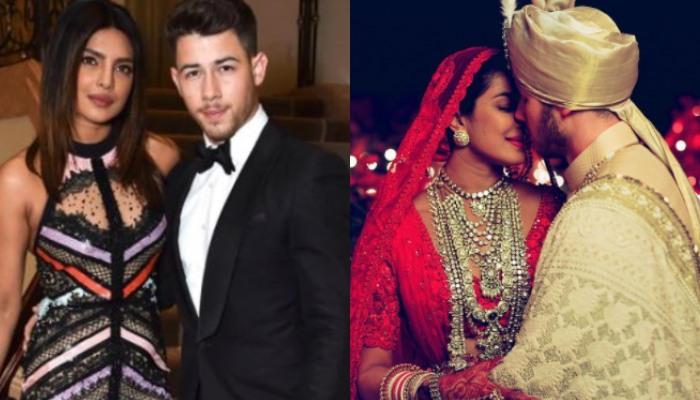 The Desi Girl of Bollywood, Priyanka Chopra had added Jonas to her surname when she had tied the knot with global pop sensation, Nick Jonas. Priyanka’s consistent appearance with Nick at award functions had sparked off their dating rumours but the actress had never addressed the same. On August 18, 2018, PeeCee had given a pleasant surprise to all her fans when she had posted pictures from her intimate roka ceremony with Nick. She had captioned the pictures as ‘taken’ and since then, Nick had become the entire nation’s jeeju. (Also Read: Anita Hassanandani's Hubby, Rohit Reddy Takes A Hilarious Dig At Pregnancy Photoshoots [Pic Inside])

When Nick had sent a DM to Priyanka on Twitter in 2016, the two had never thought that they would be husband and wife one day. It was in 2017, when Nick and Priyanka had a gala time at the Vanity Fair Oscar’s after-party where he had fallen head-over-heels in love with Priyanka. After a romantic proposal, the two had gotten married on December 1-2, 2018 according to both Christian and Hindu rituals at the Umaid Bhawan Palace. For the wedding, the two had stunned everyone with their beautiful attires designed by Ralph Lauren and Sabyasachi Mukherjee.

On December 2, 2020, Priyanka and Nick celebrated their second Hindu wedding anniversary and penned lovely wishes for each other with some unseen wedding pictures. Nick took to his IG handle and wrote, “Two days, two weddings now two years. I was so honored to get to marry @priyankachopra in her home country, in a traditional Hindu wedding. I can’t believe how lucky I am, and how quickly the time has gone by. Happy Hindu anniversary beautiful.” On his post, Priyanka's reaction was unmissable as she commented, "My real life Bollywood Hero! I love you handsome." On the other hand, Priyanka shared some intimate moments from her Hindu wedding and captioned it as “2 years down... forever to go @nickjonas.”

December 1, 2020, had marked two years of marital bliss for Nick and Priyanka. It was on this day, the two had tied the nuptial knot according to Christian rituals. To wish her hubby, Priyanka had taken to her IG handle and had posted a candid click with Nick Jonas and had written, "Happy 2 year anniversary to the love of my life. Always by my side. My strength. My weakness. My all. I love you @nickjonas."  Nick Jonas had also taken to his IG handle and had posted two beautiful wedding pictures from their Christian wedding and had penned a sweet note for his gorgeous wife, which could be read as "Two years married to the most wonderful, inspiring and beautiful woman. Happy anniversary @priyankachopra I love you." On Nick’s post, Priyanka had commented, "I love you meri Jaan." Priyanka's cousin, Parineeti Chopra had also commented on her jiju's post and had written, "Whatta day." (Also Read: Shaheer Sheikh And Ruchikaa Kapoor's Unseen Candid Pictures And Videos From Their Registered Wedding)

A few months back, Priyanka had done a fashion photoshoot for the British magazine, Tatler and the gorgeous actress had spoken about embracing the next phase of her life. She had talked about starting a family with Nick Jonas, and had stated, “Right now, this year’s really packed for me in terms of the work that I’m doing and the work that I’ve taken on. But having a family is very important to me and it always has been. It is something that I definitely want to do and I’m hoping that whenever God wills it, at the right, opportune time, it’ll happen.” She had also talked about prioritising her marriage above everything and had also revealed that despite a demanding career, she and her husband make sure to see each other regularly. (Also Read: Aditya Narayan And Shweta Agarwal Host A Star-Studded Reception, The Latter Glows In A Red Gown)

Belated wedding anniversary to the most stunning couple!