Check out the pictures and videos from Aditya Narayan and Shweta Agarwal's star-studded wedding reception below! 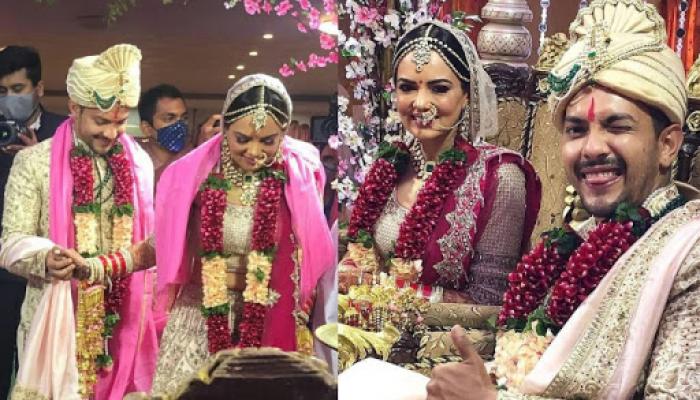 Done and dusted with the grand wedding, the beautiful couple, Aditya Narayan and Shweta Agarwal hosted a star-studded reception on December 2, 2020. Aditya and Shweta had tied the knot on December 1, 2020, the pictures from which had gone viral on the internet. And we've brought to you glimpses from the after-party. Scroll down to check it out!  (Recommended Read: Anita Hassanandani's Hubby, Rohit Reddy Takes A Hilarious Dig At Pregnancy Photoshoots [Pic Inside])

For the wedding, the handsome groom, Aditya Narayan had opted for a cream and golden sherwani. His emerald necklace and beige safa had imparted a royal look. The beautiful bride, Shweta Agarwal had donned a gold-studded white lehenga choli with an emerald studded choker, single-chain nath and a matha patti. Aditya Narayan's father and legendary singer, Udit Narayan had stolen the show with his barati dance as he had glowed in an orange coloured bandhgala for his son's wedding.

Now we've brought to you the sneak-peeks into the newlyweds, Aditya Narayan and Shweta Agarwal's star-studded wedding reception. For the reception, Aditya looked dapper in a black tux, while the beautiful bride, Shweta Agarwal looked regal in a red off-shoulder gown. Her look was accentuated with glam makeup and a high bun which perfectly complemented her look. Aditya and Shweta's reception was attended by the who's who of small and big screens. Govinda, along with his wife and daughter was spotted. Bharti Singh was also seen dancing at the party along with her husband, Haarsh Limabchiyaa. Check out the pictures and videos below:

After the wedding, in a conversation with Bombay Times, Aditya had shared that he and his wife, Shweta were planning to dance on his father, Udit Narayan's iconic song, Pehla Nasha at their reception. He had said, "Shweta and I will dance to the song 'Pehla Nasha' at the function. It will be a small function again, but we will make it a memorable one." The singer had further shared that it feels like a dream come true as he has finally tied the knot with his 11-year-long love, Shweta Aggarwal, "It feels surreal that Shweta and I are finally married now. It feels like a dream, which has come true." Sharing his happiness and how Shweta has made him a better person, he had added, "I can't imagine spending my life with anyone else, but Shweta. She has helped me become a better version of myself, she is someone with whom I can be myself." (Also Read: Mira Rajput Kapoor Wishes Her 'Saasu Maa' Neliima Azeem On Birthday, Calls Her World's Best 'Dadi')

Aditya had also talked about how they couldn't invite many people to the wedding due to the pandemic. Sharing how happy he was to see his father dancing, Aditya had said, "Keeping COVID-19 restrictions in mind, we had to settle for a small wedding. My parents are really happy. It was nice to see my father dancing at the wedding." Udit Narayan's happiness had known no bounds as it was a double celebration for him, because along with Aditya's wedding, it was his birthday on December 1, 2020.

Udit ji had also talked about his son's wedding and had said, "My son Aditya is getting married on my birthday and that is the biggest gift to me. This journey has been wonderful so far. I had struggled a lot and God has really blessed me. Whatever I got, is due to him." Talking about the congratulatory wishes he had received from his friends and Bollywood fraternity, Udit ji had revealed, "I received a letter from PM Narendra Modi shubhkaamnaon ke liye. I also got a letter from Amitabh Bachchan ji sending wishes on behalf of the family. The Governor of Maharashtra also said, 'Zaroor koshish karenge aane ke liye'." (Don't Miss: Shahid Kapoor Pens A Sweet Note For Mother, Neliima Azeem On Her Birthday, Shares A Beautiful Photo)

Here's wishing a blissful married life to the newly-wedded couple!