Their magical on-screen chemistry on the aforementioned song totally made your heart flutter, didn’t it? Such is the story of their off-screen presence as well. Or rather, you can simply say, that there ‘off-screen chemistry’ reflected onto the screens of these humsafars.

What began as friends, continues to be one of the cutest jodis of the glamour world. Every picture, every sight of this couple, every cutesy public appearance on shows as guests together prove how beautifully Himansh Kohli and Neha Kakkar complement each other as a couple. When we see the two in one frame, we cannot help but gush and totally say, rab ne bana di jodi! If you too, are an avid Nehansh (this is what their fans lovingly call them), this article will make you drool and go all ‘awww’, everytime you see their pictures or videos! How? Read on the later paragraphs to know more!

A couple, who celebrates festivals together, stays together Don't they look super-cute together? Himansh and Neha rang in Ganesh Chaturthi 2018 at Ekta Kapoor's house and looked amazing together. Sharing the aforementioned pictures, Himansh wrote:

What's the ideal gift that your loved one coming in to surprise you with great pomp and show at your birthday? Himansh Kohli did exactly that! It was long back when Himansh had realised that the Neha-Himansh jodi is working. Sharing the same in an interview, Himansh stated:

“We are strictly best friends! It is very good to hear from people such good comments about us and about our chemistry. People are liking us together. Jodi is working.”

Holding onto each other

A mere glance at Neha and Himansh, and you can totally gauge the love that they have for each other. Once speaking about their 'just friends' stance, Himansh had stated:

"Honestly, we just keep on laughing about these reports. I don’t think there’s anything wrong in what they are saying, but it’s not true. Two best friends can totally say they love and adore each other, without any meaning of romance."

Kiss Day 2018, began on a great note for Neha and Himansh. Instagram stories were brimming with love 'stories'. Himansh and Neha too, weren't left behind. The aforementioned Instagram story said it all. Did you take a look? 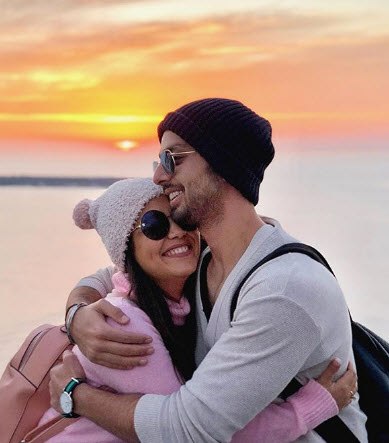 Do you know how Cupid hurled love-arrows at them? The Humse Hai Liife actor stated:

"I had to meet Neha and her brother for some work, and I wanted to discuss some songs for one of my movies. So, it was a work meeting, but after a couple of our photos got out, I got a call from my friends asking me if I had gotten engaged." Then came a time when Neha-Himansh fans almost skipped a bit when Neha posted the aforementioned picture on her Instagram handle. All were worried. But soon, Neha removed the post and replaced it with the one posted below, wherein you will also get a couple goal on how to patch-up with your rootha sajna! 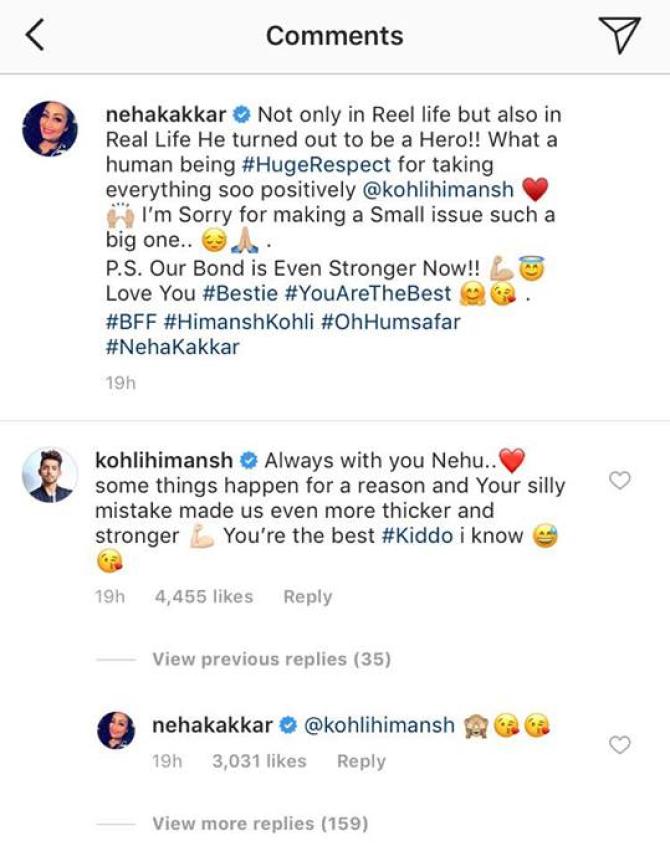 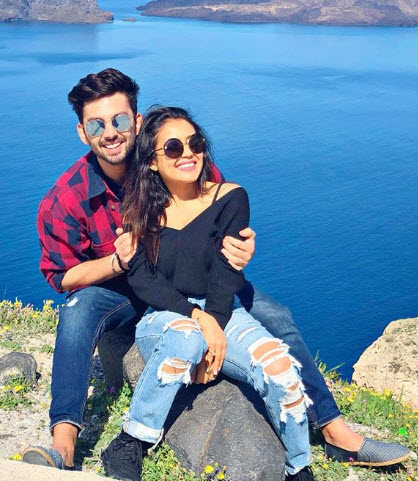 Every couple has their own share of fights, but heroes are those who are not afraid to feel and say sorry in front of the world. Neha and Himansh's story is exactly the same. Sharing the aforementioned picture, Himansh apologised to Neha and wrote:

"Im sorry for Behaving Rude the other day.. But our bond is not that weak that a silly thing will spoil our relationship.. Nehu You’re My Strength, My Angel.. If You only wouldn’t understand me who else will? Anyway.. All i know is that I Love You and Always will! My Bestie." 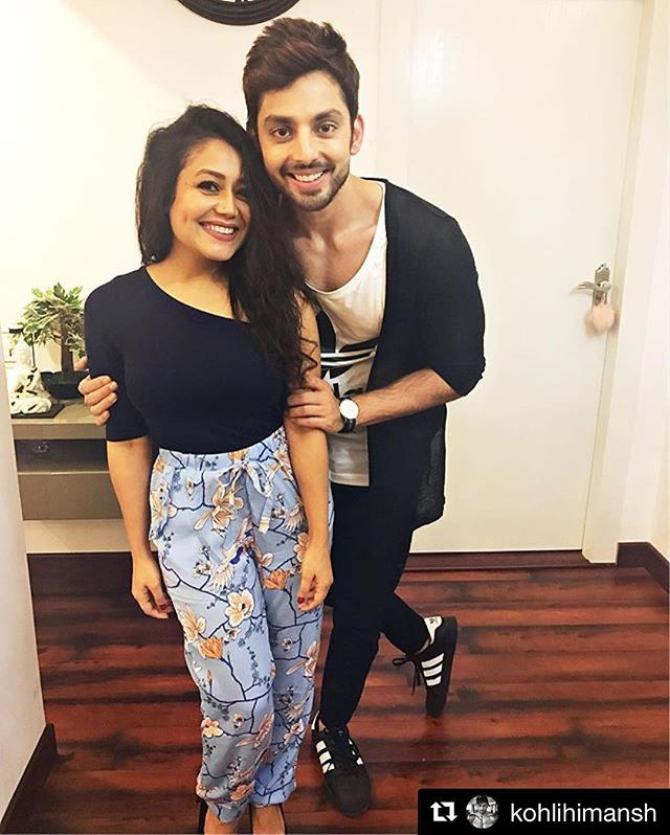 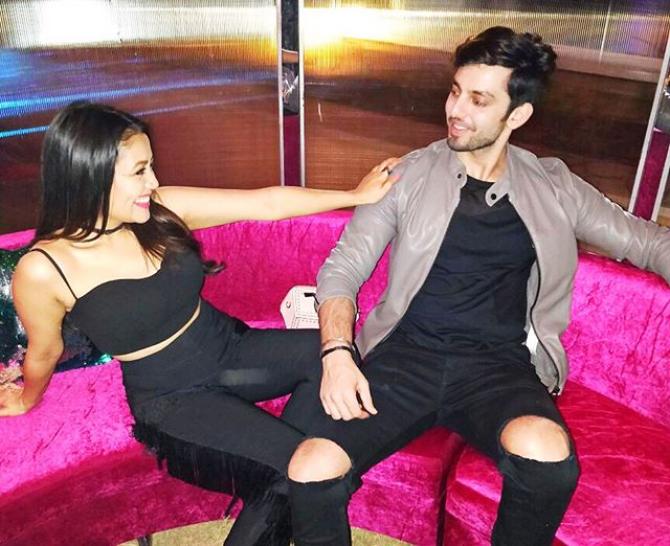 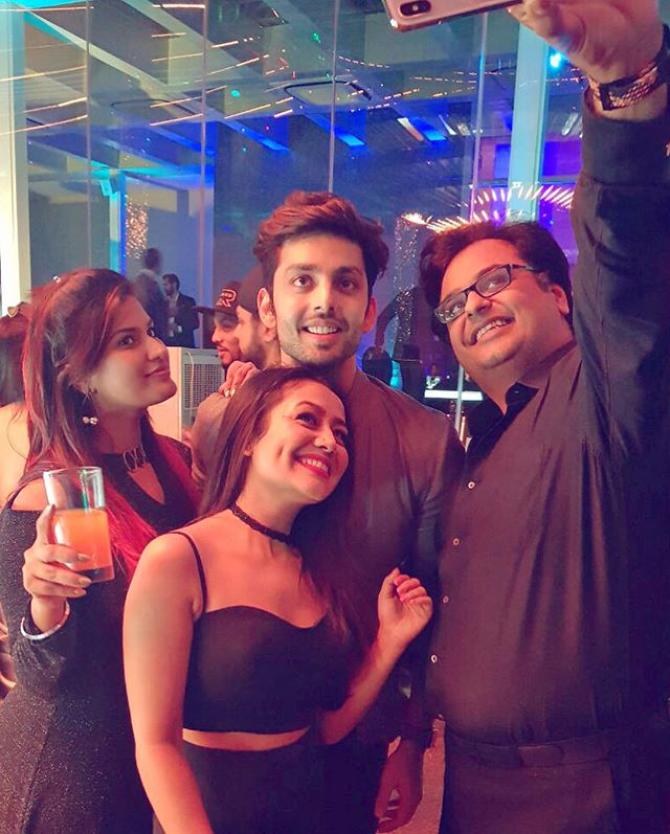 Known for going on holidays every now and then, one of the first-ever holidays that Neha and Himansh had gone together was in Goa. Sharing a few of the aforementioned pictures, the Sunny Sunny boy of Bollwyood posted a heartfelt caption to go with the post. It could be read as:

"I don't remember when was the last time I enjoyed this much, like how I did yesterday. This girl @nehakakkar can seriously get anybody in the whole damn world go crazy." 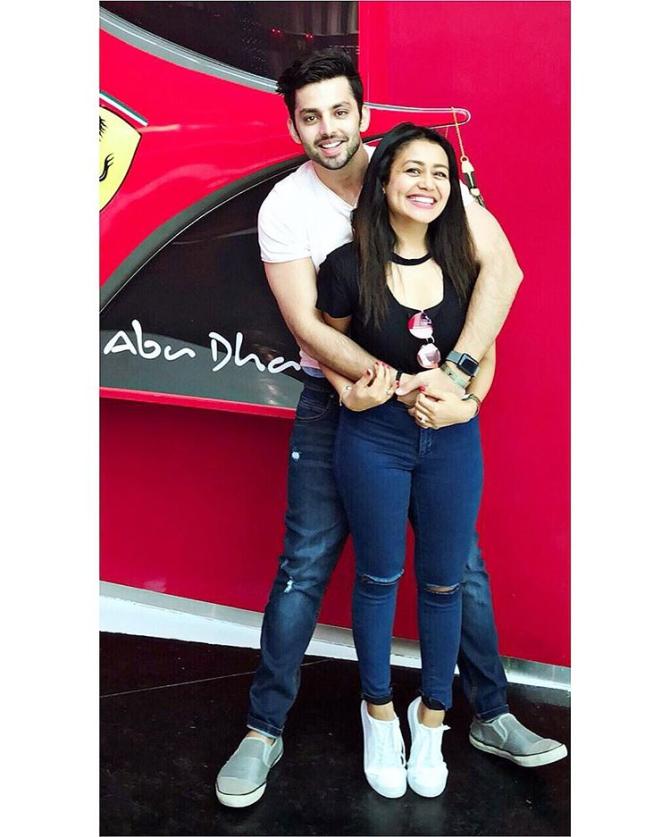 This was for Neha's 30th birthday post. The couple had gone for a vacay in Abu Dhabi and clicked the same. His crisp and simple caption that went along with the post spoke a million words:

Neha and Himansh were invited as guests on the sets of &TV's High Fever... Dance Ka Naya Tevar, where celebrity choreographer Ahmed Khan and actress Esha Gupta were the judges. Ahmed and Esha decided to have some fun with the alleged couple on the show. Ahmed had then asked Himansh about the qualities that ‘his type of girl’ should possess. To this Esha added that ‘probably a girl who can sing’. And a blushing Himansh shared:

This was followed by a romantic dance by the duo and a peck on the cheek of Neha. Well guys, any further clarity needed? Neha's 'He-man' gave a sweet surprise to her on the sets of Indian Idol 10, where Neha is currently seen as a judge. Himansh shared the aforemnetioned video from his Instagram handle and captioned the video as:

"Kuch feelings ko bataane ki zarurat nahi padti, woh bas aankhon mein dikh jaati hai.. What I said is nothing compared to what I feel! Thank you #IndianIdol for a chance to tell this to the world!! @nehakakkar."

Must Read: Karan Kundra And Anusha Dandekar’s PDA On Twitter Is Once Again Winning Everyone’s Hearts

At the show, Comedy Nights With Kapil fame, Sunil Grover was present at the show and conducted a fun swayamvar for Neha. What followed was hilarious matches for Neha and that is exactly when Himansh appeared out of nowhere. A source revealed to Mumbai Mirror:

“(Actor-comedian) Sunil Grover, who was a guest on the show, was doing a fun segment called ‘Neha’s Swayamvar’. Himansh turned up during the segment along with host Paritosh Tripathi, and Neha noted that he understands her very well, adding, ‘In the future when I think of getting married, he is going to be there in my mind’.”

Giving their beautiful camaraderie, Himansh's father had once thought that Neha and Himansh are married! Yes, this is what Sweetiee Weds NRI star said:

"But people thought that we have married each other on Mahashivratri. My father also called and he was like, ‘Beta why have you married without informing us. We wouldn’t have said no’. That felt a bit bad, that they believed something that was not true." Her smile and his look is equal to a perfect combo! But until Divya Khosla Kumar's post (which you all will get to see below), the couple was hell-bent on the fact that they were just 'good friends'. This is what Himansh had shared in an interview:

"We might have been affected had we been dating. Since he is single, and so am I, we have got nothing to worry about."

Also checkout a couple of other pictures and a video as well: 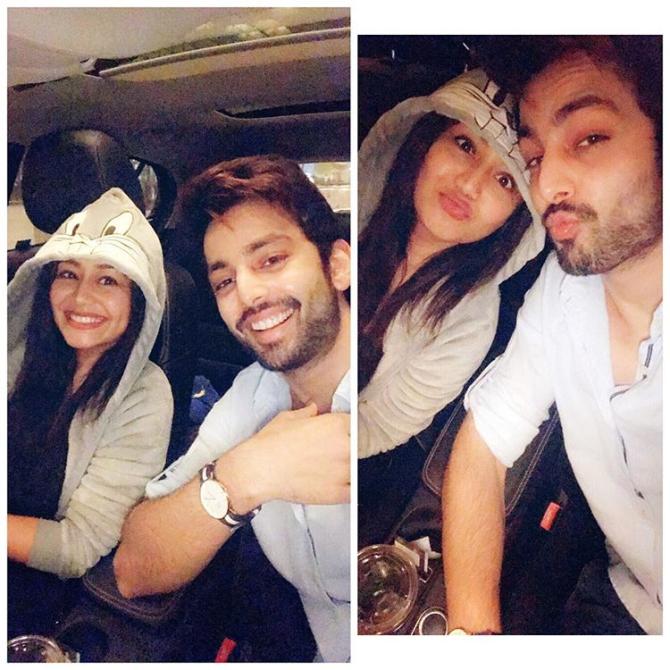 Don't Miss! Milind Soman And His PDA With Much Younger Girlfriend Is Giving Us New Definition Of Love 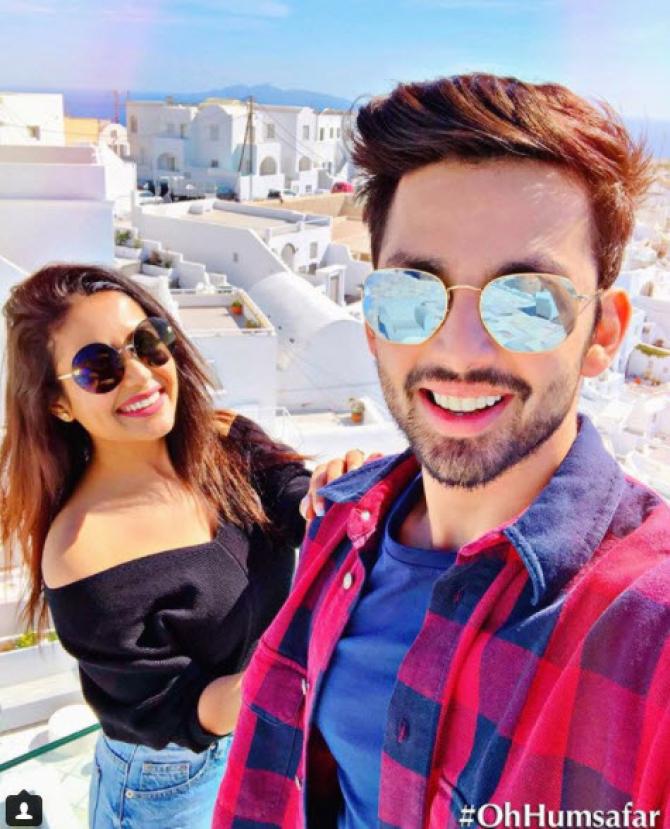 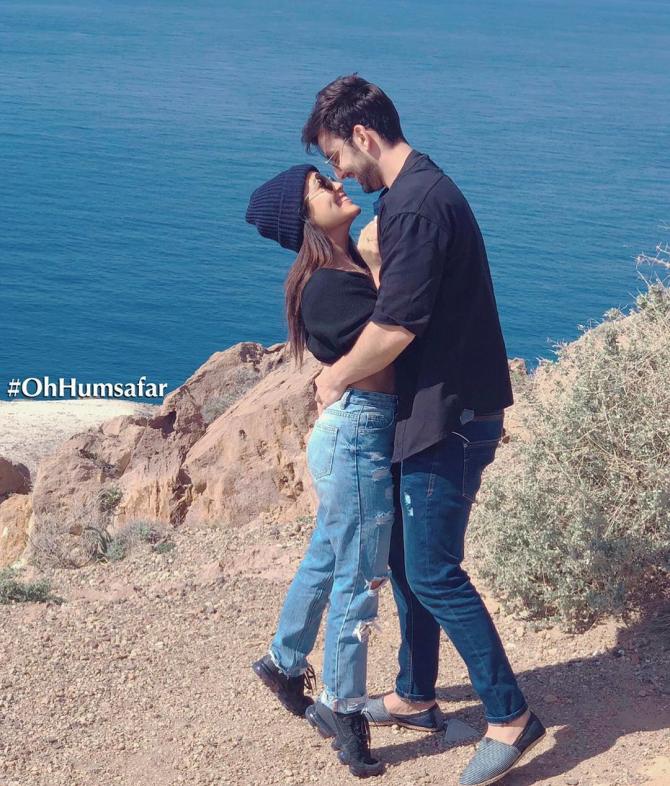 Multiple rumours were doing the rounds that Neha and Himansh are dating each other. In an interview, Himansh cleared all the air around the same. This is what he was quoted as saying:

"Rumours around our bond are true. We became great friends right after Yaariyan. And now, we have become ‘Humsafars’ since we travel together for work." 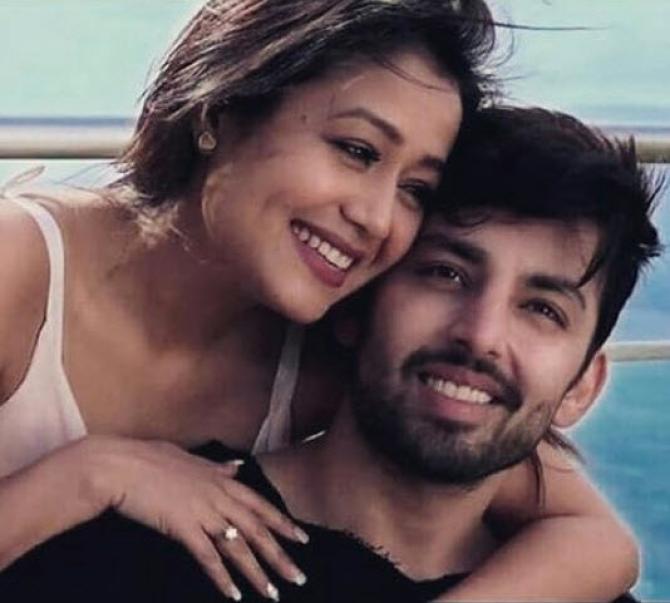 You might also see the couple working in a film together! Yes, that is very much a possibility! The Yaariyan actor had shared:

“I was telling Neha that after getting such a good response – with the song not even out yet – why not act together in films. I was convincing her in that part. I also told Tony to convince her to do films. They should step into films, as this is the right time.” 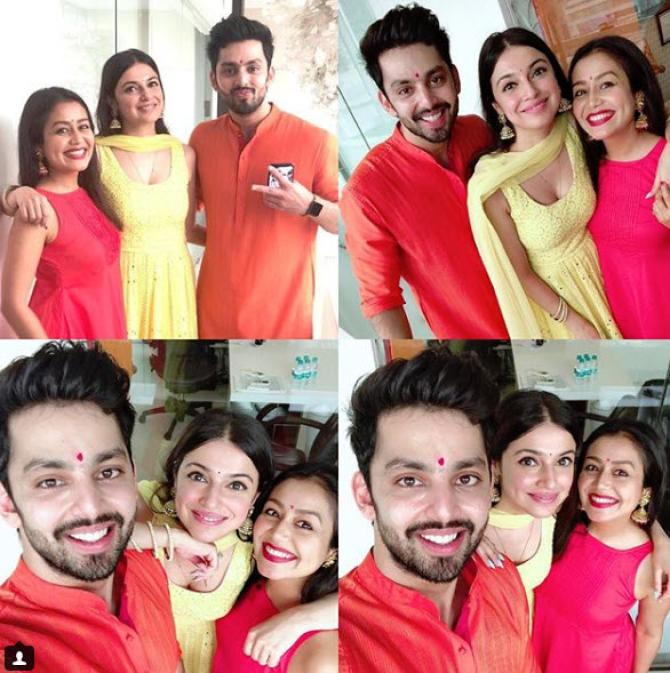 Tonnes of thanks to Divya Khosla Kumar for this post as the world finally got a confirmation. After multiple denials, Divya took to her Instagram and posted this as her caption along with the picture. This is what she wrote:

Isn’t that an amazing journey? And you know what? There’s a thing about some relationships. No matter how much one tries to hide, the love that they people have for each other becomes so evident, that one cannot help but acknowledge the fact that this is how a relationship is meant to be and who can give us better couple PDA goals than the cute-dimpled star Neha Kakkar and Himansh Kohli themselves?

Neha and Himansh, we are leaving a gap after the ‘And finally!’ section, wherein we will add in all your wedding pictures! How did you like Neha and Himansh’s PDA story? Drop us a message in the comments section below.