Neha Dhupia's Hubby, Angad Bedi Turned Into A Canvas For Their Little Baby, Mehr During Quarantine

Neha Dhupia's Hubby, Angad Bedi Turned Into A Canvas For Their Little Baby, Mehr During Quarantine

Neha Dhupia shared a boomerang of her hubby, Angad Bedi, who turned into a canvas for their baby girl, Mehr Dhupia Bedi. Check out! 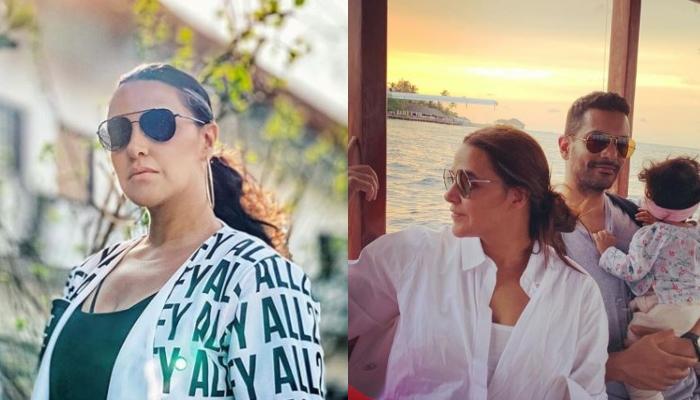 The whole nation is witnessing curfew in most of the states, and it is making things better for everyone. The other interesting part of this curfew is that it is bringing the best out of people. While some people are learning new things, some are spending precious time with their families and loved ones. Well, the only place where people are allowed to come in large numbers is social media platforms in this situation of immense crisis. However, Bollywood celebrities are the ones, who are delivering major self-quarantine goals to the common people. (Recommended Read: MS Dhoni's Wife, Sakshi Dhoni Reveals The Name Which The Couple Is Now Being Known As)

We have already seen a lot of celebrities doing the things, we have never seen them do, and it only makes us happy and inspired. One such celebrity is our Bollywood actress, Neha Dhupia and her husband and actor, Angad Bedi, who are spending quality time with their baby girl, Mehr Dhupia Bedi. Recently, a boomerang shared by the actress on her Instagram stories has sent some major father-daughter goals to the world.

On March 23, 2020, Neha Dhupia took to her Instagram stories and posted a boomerang of her hubby, Angad Bedi spending time with their little bundle of happiness, Mehr Dhupia Bedi. In the picture, we can see the father-daughter duo sitting on the floor with some drawing sheets and colours in their hands. However, the best part of the boomerang is the fact that Mehr prefers her daddy’s face to paint something instead of those paper sheets. On top of the adorable boomerang, Neha Dhupia wrote a small caption that can be read as “Daddy’s face is the best canvas… #selfquarantine @mehrdhupiaofficial @angadbedi.” Take a look. (Don't Miss: Kangana Ranaut's Family Organised A Birth 'Puja' For Actress' 33rd Birthday In Manali) 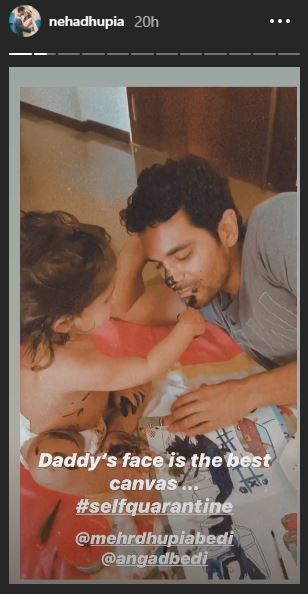 This is just pure father-daughter goals from Angad Bedi and Mehr Dhupia Bedi. Nevertheless, this isn’t the first time when we are witnessing this cute bond between this father-daughter duo of the B-Town. Going back a little bit, it was on November 18, 2018, when Neha Dhupia and Angad Bedi had become proud parents to a little cotton ball after 6 months of their marriage, and had named her Mehr Dhupia Bedi. With every month adding to her first birthday, Mehr’s star parents had taken to their respective Instagram handles to post heartfelt wishes with partial glimpses of their baby. For instance, on July 18, 2019, Mehr had turned 8-months old and her star parents had posted a dreamy picture of their beautiful family moment. Neha had also shared a partial glimpse of her daughter, Mehr, on her 8-month birthday. Sharing the picture, the actress had captioned the picture with a sweet one-liner that can be read as "8 months with our little miss sunshine... @mehrdhupiabedi.” Check out both below: 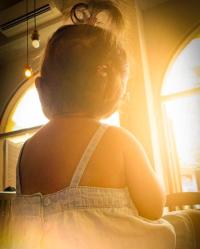 We have already heard of a lot of times in both Angad and Neha’s interview about how their respective lives have changed after the incoming of their little daughter, Mehr. However, in one such interview with the Hindustan Times, the doting mother, Neha Dhupia had revealed the emotions she had felt during her pregnancy and how much of a big challenge it was. The actress had shared, “Angad has become calmer when it comes to movie ticket bookings. Earlier we would just spontaneously decide and go to the movies. Now it is different. I have told him to tell me one day in advance.” Going further in the interview, Neha Dhupia had added, “If he wants us to eat out then I have told him to tell me two days in advance because the kitchen also needs to shut down. When it comes to travelling within the country he has to tell me three weeks in advance and if abroad then at least three months in advance. We have a schedule now that we follow as husband and wife. It's a scheduled love story. We have a particular time in the day slotted just for us. Mehr has put us on a timetable. It is all just so rewarding. It has kept me very busy. It has kept me entertaining.” (Also Read: Arjun Kapoor And Malaika Arora Cheer By Clapping From The Actress' Balcony On 'Janta Curfew') 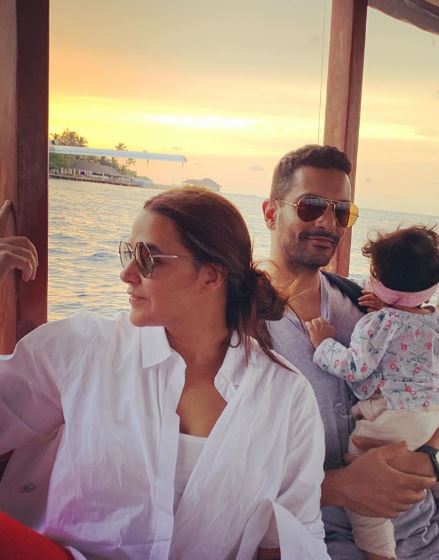 Do you find Mehr and Angad’s boomerang adorable? Let us know! 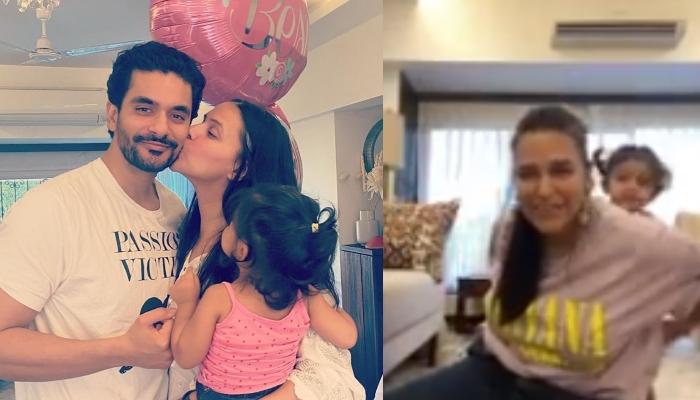 A woman's life completely changes, the moment she hops on the motherhood journey. Your 24 hours of a day is devoted to a little being, who has endless demands and wants to be glued to you whenever you are at home. While being a mother is not an easy task, it