Being a single mother was never easy, especially in the '90s but Bollywood actress, Neena Gupta has defied all the myths and has raised her beautiful daughter, Masaba Gupta!

Being a single mother is not at all an easy job! We live in a world that continuously judges a woman based on her life's decisions be it raising her kids as a single parent or being a working mom. We are part of a society that is built with lots of stereotypes, especially in the era of '90s, it was way difficult. And Bollywood actress, Neena Gupta has defied all such notions when she had chosen to give birth to her child out of wedlock and has not only broken many societal notions but she has also raised her beautiful daughter, Masaba Gupta. (Recommend Read: Saath Nibhaana Saathiya Star Lovey Sasan Delivered A Baby Boy, Reveals The Name Of Her Son)

We all know that Neena Gupta's life has been a rollercoaster ride. She has always been way forward from her time. She has worked harder and continues to do that. From having rumoured affairs to her wedding with Shaarangdev, Neena’s personal life has been filled with gloomy days and storms, but despite, it all she maintained her life with dignity. We all know about Neena's affair with West Indies cricket team captain, Vivian Richards, he was already a married man. However, Neena had fallen madly in love with him. In fact, she has even given birth to his daughter, Masaba Gupta.

On Neena Gupta's Birthday Her Daughter, Masaba Gupta Describes Her Life Journey In A Badass Wish

Masaba Gupta Shares Why Her Mother, Neena Gupta Couldn't Afford A C-Section During Her Pregnancy Recently, Neena was invited at the singing reality show, Indian Idol 11 and was moved by a contestant's performance. During the show, the actress revealed that it was her father, who stood as a pillar of strength and helped her raise her daughter as a single mother. She said, "My father played a very important role in raising my daughter, he especially shifted to Mumbai to help me. I cannot express how thankful I am to him. He was my backbone during the most crucial time of my life." While Neena ji is considered as an inspiration, she has gone on record to say that she never advise anyone to become a single mother. In an interview with the Mumbai Mirror, Neena had revealed the reason behind her thought and had said, “I would not have a child outside marriage. Every child needs both parents. I was always honest with Masaba, so it did not affect our relationship, but I know she suffered.” (Also Read: Neeru Bajwa Becomes Mommy For The Second Time, Shares The Name Of Her Twin Daughters With A Post) In an interview with film critic, Rajeev Masand, Neena ji had said, "Very much. All the time. I feel it was a very selfish act on my part. Some of my friends told me it won’t be fair on part of the child, but kaun sunnta hai uss waqat, blind hotey hain (who listens at that age, people are blind). I also feel sad because she was lonely. I wish I had another child but circumstances weren’t like that)." For those who don't know, Masaba and her ex-husband, Madhu Mantena had tied the knot in the year 2015. But their destiny had other plans and they filed for trial separation in August 2018 and were granted the same in March 2019. Masaba, who has always accepted her choices head-on, had announced the sad news on her Instagram handle. Later, the former couple had released an official statement on their divorce, which could be read as, “After much thought and consideration, we have come to an amicable conclusion on all matters. We have decided to move forward separately and get divorced. We are two individuals who respect and care for each other and have made our own choices. We would appreciate if we are given our privacy at this time.” 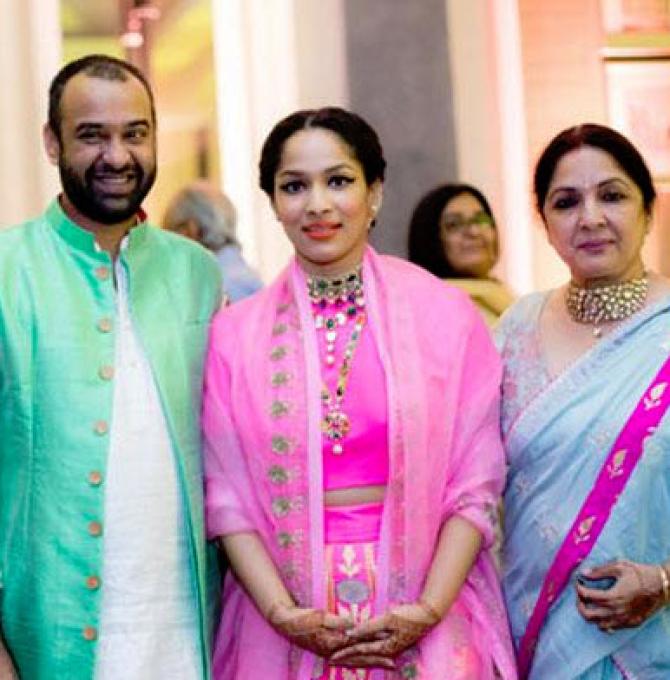 However, Neena ji had talked about the same in an interview with Rajeev Masand and had said, “Like a normal mother, I said don't take any decision in a rush. Think about it because me and my husband both loved Madhu and still love him. He's a very nice man and we still love him. But... nahi bana toh nahi bana...Humne bola socho isko, aisa nahi hai ki immediate decision liya, they thought about it. It was a very big shock to me.” (Don't Miss: 'Indian Idol 11' Judge, Neha Kakkar Reveals That Aditya Narayan Is Going To Get Married This Year)

Well, Neena ji has been an inspiration for many of us!

On Neena Gupta's Birthday Her Daughter, Masaba Gupta Describes Her Life Journey In A Badass Wish

Masaba Gupta Shares Why Her Mother, Neena Gupta Couldn't Afford A C-Section During Her Pregnancy