Men In Esha Gupta's Life: Came Close To Marriage With The First But Broke Off Due To BF's Parents

Men In Esha Gupta's Life: Came Close To Marriage With The First But Broke Off Due To BF's Parents India has a deeply rooted celebrity culture and there is no denying to the fact that tinsel town celebrities are the most desirable people across the country. They rule the hearts of millions and also break them after getting hitched. Naturally, with such humongous fan-following among the masses, these celebrities often have multiple affairs and their love lives are every bit interesting.

Recommended Read: 7 Men Came Into Madhubala's Life, Only To Leave Her All By Herself On Her Deathbed

One such Bollywood celebrity is the sensuous and sultry Rustom star, Esha Gupta. Actress, model and Miss India International 2007, Esha Gupta is having quite a run at the movies. She debuted with the 2012 film, Jannat 2 and was last seen in Total Dhamaal. Naturally, being a successful actress with stunning looks, Esha Gupta has had multiple affairs. So, let’s look at men in Esha Gupta’s life. 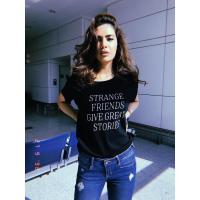 Esha was born in Delhi to a now-retired air force officer and a homemaker mother. She holds a degree in Mass Communication and even got a scholarship for further studies from Newcastle University. But fate had other plans and she auditioned for Femina Miss India 2007 where she won the title of Miss Photogenic. The same year, she also won the title of Miss India International. She made her Bollywood debut in 2012 with Jannat 2. And from thereon, there has been no looking back for Esha. In an interview when she was asked about the man of her dreams, she said:

“Well, I have an OCD about good fragrance and undeniably, it would be someone who smells good all the time. Fragrance attracts me a lot. Even my dog wears a fragrance; he remains clean and is sprayed regularly. He can live with me only if he smells good”.

The first fling with Armaan Gujral

Son of the Delhi-based architect, Mohit Gujral and former model Feroze Gujral, Armaan Gujral dated Esha Gupta for a long-time but parted ways later. In fact, it was once conjectured that they are getting married soon, but Armaan’s parents were allegedly against Esha’s career choice of acting. Esha had always remained vocal about her love with Armaan. Speaking about him once to Femina magazine, Esha said:

“I’m just lucky in love. Armaan has always been there for me. He has seen me grow from the time I was a fun-loving youngster in Delhi, to when I moved to Mumbai to earn a livelihood. He has stood by me for almost five years, yet our relationship feels so new. That’s because we don’t get to see each other that often. We have to rely on Skype to connect every day. Whenever he is in Mumbai, we enjoy cooking, eating out and taking rickshaw rides post-midnight”. 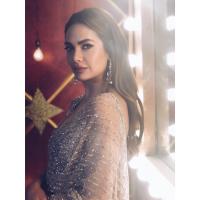 She further revealed as to how she first met with Armaan and fell for him:

“I met Armaan at F-Bar in Delhi where I used to go clubbing with my older guy friends and their respective girlfriends. I didn’t have a boyfriend then. I remember seeing a very good-looking young boy in the crowd that night. He walked up to me and introduced himself. I took him aside and asked him to pretend to be my boyfriend, as a lot of shady men were trying to approach me. When we were leaving from the club in the morning, I invited him to join us for breakfast at a hotel. He asked me to travel with him in his car, but I couldn’t because his phone was dead and he couldn’t find his driver or the car. After two days, he called me. He said: ‘Did you go to that hotel that morning? My father has designed it.’ It was such a put-off. Then he clarified that he does have a car, which made me crack up (laughs). We went on a couple of dates before getting into a committed relationship”. 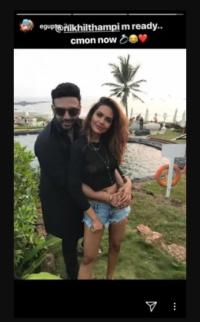 Esha Gupta allegedly dated costume designer, Nikhil Thampi and it came as a sweet surprise to everyone when she posted the above pic with him on her Instagram stories. As one can see the caption is followed by a ring, laughter and a heart emoticon, and it took no time for people to start conjecturing that they are soon going to get engaged. 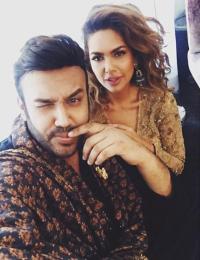 But later, she clarified in one of her Instagram posts that Nikhil is just a good friend and wrote:

“Ok guys he is one of my closest best friend. we love each other, as friends. JUST FRIENDS..he’s one of my bffs n m very lucky to have him.. @nikhilthampi why don’t you love me back eh? Anyways hope this clarifies all the media reports..also, find me a man someone been single forever.. thanks”.

Most recent with cricketer Hardik Pandya

Recently, the Rustom actress was rumoured to be dating Indian all-rounder cricketer, Hardik Pandya. Reportedly, the two met at a party and hit off instantly. A leading daily had reported:

“Right now, both of them are hush-hush about their budding romance. They want to see how things turn out. They make their lunch and dinner plans secretively and want to avoid the public glare. Currently, they are in the phase where they are getting to know each other”.

“They make their lunch and dinner plans secretively and want to avoid the public glare. Currently, they are in the phase where they are getting to know each other”.

However, when media portals approached Esha, she denied any link-up with Hardik and simply said:

“I’m not getting married anytime soon. I’ll let everyone know when I do”.

Well, after going through the above points, we can say that Esha Gupta has not really been lucky in love, and we really hope that she finds the man of her dreams soon.