The Simmba actress, Sara Ali Khan turned 24 on Monday and celebrated her birthday in Thailand and her friends in Bollywood and family members wished her on social media with adorable posts. Sara Ali Khan had a choice of five spectacular birthday cakes to celebrate on the sets of Coolie No.1 with the entire unit. Her birthday celebration was made extra special on the sets with the Pyjama party hosted by the team, including her co-star Varun Dhawan, director David Dhawan and co-producer Jacky Bhagnani. On Sara's Birthday, team Coolie No.1 released the first poster from the movie, one of which also featured the actress. Sara Ali Khan's birthday celebration in Bangkok has been a love-filled one as her rumoured beau Kartik Aaryan paid her a surprise visit to make her day extra special!

A love story started brewing on the sets of Karan Johar’s chat show Koffee with Karan has now turned into a full-fledged romance. Sara Ali Khan made her debut on Karan’s show. She raised the alarm when she said she wants to date Sonu Ke Titu Ki Sweety actor Kartik Aaryan. During a rapid-fire segment, Karan had asked Sara, "An actor you would like to date?" Before Sara could answer the question, KJo had said, "You've already said that" hinting at Sara's previous answer, where she had said that she wishes to marry Ranbir Kapoor. Much to KJo's surprise, Sara also had a reply to this question. She had said, "I want to marry Ranbir Kapoor. I don't want to date him. I want to date Kartik Aaryan." (Suggested Read: Aly Goni and Natasa Stankovic Had A Huge Fight Before Their Performance, Affecting Their Chemistry) 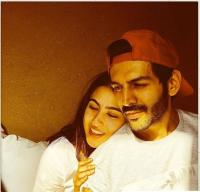 Ever since Ranveer Singh had introduced Sara and Kartika at an awards show, the lovebirds have been inseparable. Sara is often seen dropping by on the sets of Pati Patni Aur Woh in Lucknow. Sara is in Bangkok for the shooting of Coolie No.1 along with Varun Dhawan. Making her day super special, Kartik Aaryan has taken a short break from his hectic schedule to celebrate Sara’s birthday in Bangkok. On Saturday ( August 10), Kartik flew off to Bangkok to ring in Sara’s birthday. Sharing an adorable picture with Sara, Kartik wrote, “Happy Birthday Princess @Saraalikhan95. And Eid Mubarak (this time without a mask).” Kartik was referring to his June 5 post on Instagram where the duo clicked a selfie covering their faces with masks as they celebrated Eid-ul-Fitr. Not just the post, the cake in the selfie posted by Kartik Aaryan also read, “Happy Birthday Princess”. (Recommended Read: Shweta Tiwari's Daughter, Palak Tiwari Reveals She Has Been A Victim Of Domestic Abuse Not Her Mom)

Sara and Kartik’s cosy romance has been making headlines for a few months now. If the social media PDA wasn’t enough, Kartik came to cheer for Sara on her ramp debut at the Indian couture week last month along with Ibrahim Ali Khan. If their online romance is keeping their fans entertained, their on-screen Jodi in Imtiaz Ali’s Aaj Kal has become the talk of the town. Ever since Imtiaz has roped in Kartik and Sara for his upcoming film, their fans are reaching another level altogether! Sara and Kartik had posted heartwarming notes for each other after the film’s wrap up. Sara had taken to her Instagram handle to thank Kartik for his company. She had worded her post as, “Thank you @Kartikaaryan for instantly making me comfortable with you, for selflessly giving and for consistently looking out for me. From coffees about you to chai's with you, I wish we could do it all over again. I'm going to miss you more than you know and more than I can admit." ( Must Read: Niti Taylor Twins With Her Soon-To-Be Fiance Parikshit Bawa On Mehendi Ceremony, Pictures And Videos)

Kartik too had written an equally adorable post, "When Veera says "...Par yeh raasta, yeh bahut accha hai. Mein chahti hoon ki yeh raasta kabhi khatam na ho" This is what shooting with @imtiazaliofficial feels like. 66 days were wayyy too less. It's a wrap. A film i never wanted to end. Thank you to my dream director.. And couldn't have asked for a better saathi in this journey than Princess @saraalikhan95 Want to work with you again and again and again."

Sara Ali Khan's birthday celebration included a visit to Brahma temple in Bangkok along with her mom Amrita Singh. The actress had shared a cute picture with her mother Amrita Singh after a temple visit. Take a look. 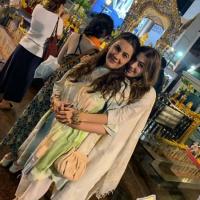 What do you think about the adorable gesture by Kartik Aaryan? Let Us know!