'Kaisi Yeh Yaariaan' fame, Niti Taylor is all set to get engaged to the love of her life, Parikshit Bawa. The pre-engagement festivities have already begun with a fun-filled 'mehendi' cermeony. 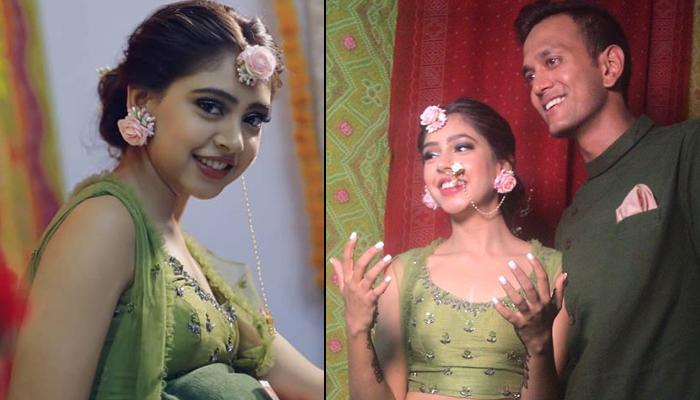 Mehendi Hai Rachne Waali, Haathon Mein Gehri Laali, Kahein Sakhiyaan Ab Kaliyan, Haathon Mein Khilne Waali Hain, Tere Mann Ko, Jeevan Ko, Nayi Kushiyaan Milne Waali Hain… the mehendi ceremony is the commencement of the wedding revelries and for the bride-to-be, it holds the utmost importance. We are almost 8 months into 2019 and a wide array of stars have already tied the knot, becoming each other's for eternity, while some made their relationship official. The mehendi moment finally came into the life of Kaisi Yeh Yaariaan fame, Niti Taylor, who is all set to get engaged to the love of her life, Parikshit Bawa. (Also Read: Ranbir Kapoor Has Asked Alia Bhatt's Hand For Marriage From Mahesh Bhatt For Their 2020 Wedding?)

It was on August 12, 2019, when Niti Taylor had surprised everyone by introducing the ‘man’ of her life, Parikshit Bawa to the world with her engagement announcement. She had taken to her Instagram and had posted a ‘lost in each other’s eyes’ picture with Parikshit. Niti had captioned it, “We decided on FOREVER. On the eve of beginning my life's most beautiful moment, I feel all the love and happiness there possibly can be. It only feels complete after letting you all know. I've had your love and support since the past decade and with great happiness I'd like to inform everyone that I'm getting ENGAGED! We would like to share this moment with you all and seek your blessings and good wishes for this new innings in our lives… #PARTITAYLES.”

Since then, netizens have been keeping an eye on Niti Taylor and Parikshit Bawa’s wedding hashtag, #Partitayles to get a glimpse of the soon-to-be-engaged couple. On August 12, 2019 evening, some pictures of Niti, applying henna on her hands and dancing like there’s no tomorrow with her fiancé, went viral on the social media. Niti twinned with Parikshit in olive-coloured ensembles. Posting a much-in-love picture with Parikshit, Niti wrote, “#PARTITAYLES To love laughter and happily ever after @theglamweddingofficial.” Checkout some more pictures and videos from Niti and Parikshit's pre-engagement function:

Parikshit Bawa’s sister, Natasha Bawa shared a heartfelt note for her sister-in-law-cum-best friend, Niti Taylor, on her Instagram story. Expressing how blessed she feels having a sister-in-law like Niti, Natasha’s note could be read as “Sister-In-Law From the first day that I met you. I knew you’d be my friend. I knew that I could count on you. You always have time to listen. And time to give and share; by all your words and actions, you show you really care. You are so very special, it shows in all you do. I’ve found a special friendship and I’ve gained a sister too. As a sister-in-law, you’re great. As a friend, you are the best. I’m truly blessed.” And wrote, “We love you!! @nititaylor” atop her story. (Also Read: Shweta Bachchan Made A Statement In White On Wedding Ceremonies, Resemblance With Navya Is Uncanny)

A while back, some videos and pictures of Niti Taylor dancing her heart out at The Drunken Botanist, DLF Cyber City, Gurgaon with her friends, had circulated on the internet, and if the reports are to be believed, it was from her bachelorette bash. When TellyChakkar had contacted Niti and asked her if she is getting married, the Laal Ishq actress had retorted, “No, I am not getting married. I am on a family vacation and the news about me tying a knot is incorrect.” Check out a group picture from her bachelorette party:

Before Parikshit Bawa, Niti Taylor had made headlines for her relationship with her Kaisi Yeh Yaariaan co-star, Parth Samthaan. Viewers were madly-in-love with their on-screen chemistry and even their off-screen chemistry had become a rage among the youth. When Niti had announced her engagement with Parikshit on Instagram, first among her other celebrity friends was Parth, who had congratulated her. Parth’s comment on Niti’s post could be read as “Beautiful congratulations. Bless you both. Best wishes!!!” followed by a lot of smileys.

In a 2017 interview with the Hindustan Times, Niti Taylor had addressed the reports of the problems between her and Parth Samthaan while they were shooting for Kaisi Yeh Yaariaan. Reacting to the same, Niti had said, “They were all rumours.” When asked if such rumours affect her image, Niti had retorted, “I really think they do. One report comes out and everyone picks it up without verifying it, and soon, it’s viral. The next thing you know, people think, ‘She has problems with co-stars. How will she work in our project?’ I am the last one to throw tantrums; you can ask everyone on the set. When people learnt that I would no longer be a part of the show, many co-actors told me that they were sad and didn’t want me to leave. I am sure I have affected a lot of people’s lives, as I spread happiness wherever I go. Negative things do happen, but once you meet me, you would know they [the rumours] are not real (laughs).”

In a throwback interview with the India Today, Niti Taylor had spoken on similar lines and had stated, “No, we are like house on fire. I don't know how we've done the scenes because half the time we kept laughing while shooting.” On the other hand, in an interview with The Indian Express, Parth had shared, “Before we started, we discussed whatever issues we had and decided that we will start afresh so that work doesn’t get hampered. We are young people and all we want is to bring positivity around us. You can be cold, negative and bothered about people and situations but you can’t carry the baggage for years. There has to come a point, where you need to let it go. It will only make you a better person.” (Also Read: This Bride Wore A Sabyasachi Lehenga That Will Remind You Of Deepika Padukone's Wedding Ensemble)

Stay tuned with us for first-hand pictures and videos from Niti and Parikshit’s engagement!

MTV's Kaisi Yeh Yaariaan fame, Niti Taylor had broken a million hearts when on August 13, 2019, she had announced her engagement with her long-time boyfriend, Parikshit Bawa and after one year, on the same date, the actress had tied the knot with him in a hush-hush Gurudwara wedding. Since then,