Okay, tell us something, no matter how much you talk of Netflix and other streaming channels, do you still chup-chup ke watch Ekta Kapoor’s daily shows? And, did you just smile at this? Aha! We got you! Congratulations and take pride on being termed as a true ‘daily soap person’! And, c’mon, it’s kinda cute!

When we talk about shows where the lead tells ‘Nahi-nahi-nahiiii’ at the smallest of things and you like it, then nothing like that! And this gives us a benefit-of-doubt to think that you might be a regular viewer of one of Star Plus’s highest TRP grosser, Yeh Hai Mohabbatein. And if you like the show, you might be watching it for an obvious reason- the oh-so-handsome and grumpy Raman Kumar Bhalla a.k.a, Karan Patel (we got you again!). 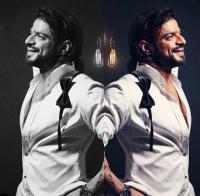 And why wouldn’t you? He is one of the most handsome actors of the telly town. With superb looks and acting skills, he could make anybody fall for him. While there’s no chance to that anymore ladies, as the dashing actor is already married to Ankita Bhargava and is soon going to be a daddy. While he met Ankita and fell in love immediately after a half an hour’s conversation, Karan had many women in his life before his marriage. One of them was a well-known actress and a Bigg Boss contestant. Interested to know about all of them? Follow this article’s trail!

She was a top-notch model before she was roped in for Kutumb. Amita used to portray the role of a vamp and it was there that she met Karan Patel, who was also a part of the show. Soon after, they became the talk of the town when Amita and Karan participated in Nach Baliye 3, together as a couple. Post the show, they soon parted way and their fans were disappointed for faking a relationship to be a part of a reality show. In an interview with the TOI, when Karan was asked about his relationship with Amita, he shared:

"We were friends and we suited the rules and regulations of 'Nach Baliye.' You could say we were a pair, or you could say we were never a pair. I never proposed to her. There was never a girlfriend-boyfriend tag. We were two people who hung out together quite often."

Amita is now a happily married to hubby, Ritesh Tiwari and recently embraced motherhood on February 4, 2018, by welcoming a baby girl, Zya.

This one had an ugly beginning and an ugly end. Or probably, no beginning or no end at all. Karan and Payal participated in an adventure-based reality show, Survivor India, when the duo was reported to hang out with each other quite a lot. But things went in for a toss when Payal accused Karan of making an indecent proposal to her, which Karan had denied later. Rumours also had it that Karan landed at Payal's hotel room around 2 o’clock in the night and kept on banging the door to her room. Payal took this incident to Twitter and also called him ‘a rapist’. In a throwback interview, when Karan was asked about the same, he shot back saying:

“It is all rubbish. I don’t want to waste my time discussing on this issue. Furthermore, I think Payal needs psychiatric treatment.”

While Karan is happily married, Payal is in a live-in relationship with a wrestler and ex-Bigg Boss contestant, Sangram Singh.

Karan was linked to another contestant, Left Right Left fame, Priyanka Bassi, on the same reality show, Survivor India. Grapevine was abuzz that although they maintained that they were ‘good friends’, the duo used to get quite cozy with each other during the night. However, not much was seen or heard of Karan and Priyanka after the show ended. Priyanka was also linked with Karan Wahi on the same show. In a throwback interview, Karan Patel shared:

“I don’ know who is spreading such talks. Priyanka is just a good friend, nothing beyond it. I had a good rapport with the other contestants as well.”

We guess you all know about the great camaraderie that the ex-Bigg Boss contestants, Pratyusha Banerjee and Kamya Punjabi shared. Apparently, when Karan was seeing Kamya, Pratyusha had developed a slight liking for the handsome actor. Rumours also had it that Kamya had questioned Pratyusha on it and they both had fought over Karan. When asked, both Pratyusha and Kamya had denied any such rumours and they maintained a cordial relationship with each other in public. A source close to Kamya had shared in an interview:

“Kamya Punjabi’s life is not limited by Karan Patel. What Karan did, does and will do is his business not mine. If people want to cheat, they will cheat but according to me there was nothing between Karan and Pratyusha. I think a dead person deserved more respect than this!”

Kamya and Karan were in a steady relationship before they shocked the world with the news of their breakup. As per reports, the main reason behind their breakup was that Karan’s mother did not approve of Kamya as she was divorced and a single mother. Only after a few months post their breakup, Karan went on to marry actress, Ankita Bhargava. A source close to Kamya shared that she ‘still loves’ Karan. It was shared:

“She still loves him because she loved him truly, unlike Karan. In fact, she has never loved anybody so deeply as Karan. She was imagining her entire life with Karan. She took care of even his work. Leave aside work, she was looking after his hairstyle and makeup too. And then suddenly, one day, it was all over.”

Must Read: Karan Married Ankita In Few Months After Terrible Break-Up With Kamya; The Reason Revealed

Post his breakup with Kamya, Karan straightaway thought of settling down with a woman of his dreams. That’s when Ankita Bhargava, who has changed her name to Ankita Karan Patel post her marriage, came into the picture. Did you know? Neither Karan nor Ankita had taken the first initiative. It was their families and actor Aly Goni who played the cupid in Karan and Ankita’s life. There was no period of dating as a direct rishta was sent by Karan’s family to Ankita’s. When Karan was asked that what made him think that Ankita was ‘the one’, he shared:

“The heart doesn't need a reason, it is the mind that needs to be convinced. And in our case, the heart will always rule.”

Well, looks like all’s well that ends well! Although Karan had been linked with several women, it is good to note that he is now happily settled, madly-in-love with his wifey, Ankita and is soon going to be a daddy to a little munchkin. To all the readers, did you know about all of the aforementioned linkups that Karan had? Which one surprised you the most? Let us know in the comments section below.