On May 27, 2019, Ajay Devgn's father, Veeru Devgan passed away and on May 28, 2019, Kajol's mother, Tanuja was hospitalised. Checkout the mother-daughter picture, showing gratitude. 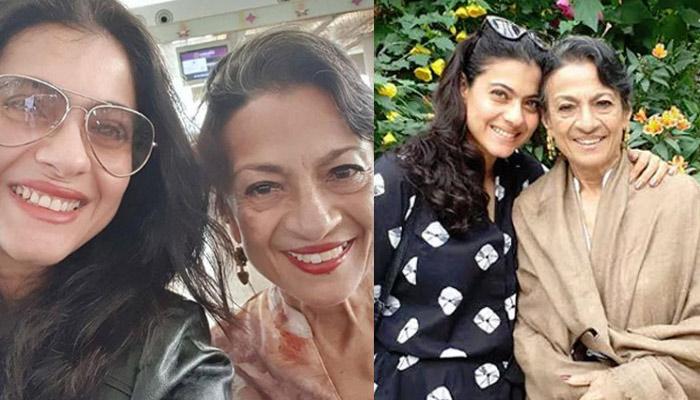 Sometimes when life is going smooth and everything seems so on-point, fate throws a googly. All you need to do is stay calm, positive and strong through tough times and the phase shall pass soon. One of the famous Bollywood actresses, Kajol, is surrounded with so much pressure these days. On May 27, 2019, her father-in-law and action director, Veeru Devgan, left for his heavenly abode. While the Devgan family was coping up with the huge loss, there came another news into the forefront.

For the ones who don’t know, Tanuja was admitted to Lilavati Hospital two days after Veeru Devgan’s death. It was on May 28, 2019, that Tanuja was hospitalised “with some pain in abdomen”. On May 30, 2019, she underwent a surgery and stayed in the hospital for the rest of the week. As per the reports, she was diagnosed with Diverticulitis, which is a case where small pouches gets inflames and gets infected, that develop along the walls of the intestines. (You May Check: Dipika Kakar Can't Stop Gushing As Shoaib Ibrahim Pays A Surprise Visit On Set, Pictures Inside)

Recently, Kajol took to her official Instagram handle and shared a lovely picture with her ailing mother, Tanuja. Though Tanuja ji looks quite weak in the click, Kajol thanks all the well-wishers who have been with them during the tough time. Sharing the following picture, Kajol wrote, “This is just a great big THANK YOU to everyone who has called and prayed and thought of us. This smile that you see is of sheer gratitude.” Take a look at the snap here:

Once in an interview with the UNI, Kajol had revealed the kind of upbringing she got from her dear mother, Tanuja. The Helicopter Eela actress was quoted as saying, “'My mother is the complete opposite of Eela. The kind of upbringing she gave me is something I will treasure. I think I am lucky to be born to her. I could not have chosen a better mother. Because she was extremely brave bringing me up.” She had further gone on to add, “The kind of things she taught me as a kid, I used to get frustrated at that time but now I realise when I have grown up that telling those things when I was younger, I was able to put it into practice when I became an adult. I don't have to read self-help books. Like she used to tell me that 'anger is not going to win' and I used to get pissed off and shout on her. She told me 'act, don't react'. So, these all are some stuff that I learnt from her.” (Also Read: Suhana Khan's Latest Dance Video Is A Trendsetter, She Gives Best Dancers A Run For Their Money)

In another interview with a leading portal, Kajol had revealed what she has learnt from her mother, “One important thing that I have learnt is that women cannot be empowered by anybody else but themselves. When we talk about women empowerment, we tell women to speak out. If you believe in yourself, that is the biggest empowerment. If I go to work, hopefully, my son grow up to realise that women are like this and they are capable of this and that is normal.”

Adding further, she had quipped, “Every mother should teach her son to expect better from the women around him and that's how women's empowerment will happen. As mothers, we have the power to change the world because we are taking care of the next generation. We have the power to change their thinking by not taking crap and standing up for ourselves. We don't need to say anything. We need to show them.” (Checkout: Sonam Kapoor Ahuja Celebrates Her 34th Birthday With The Love Of Her Life, Family And Friends)