Kajol and Ajay Devgn have a very close-knit family and they love to spend time with their kids. Recently, Kajol revealed one important parenting lesson that she learnt from her son, Yug Devgn. 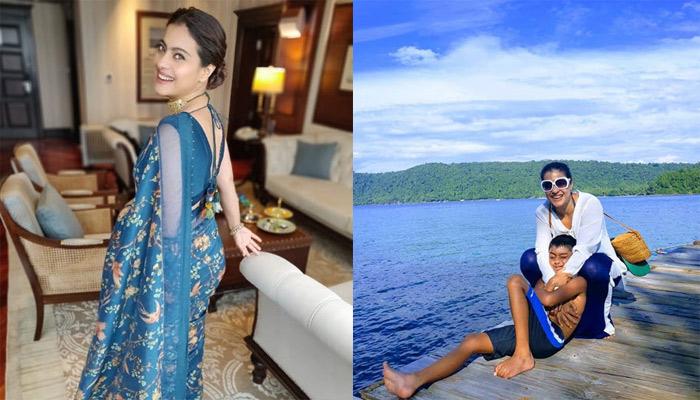 There is no such thing as a perfect parent, every parent learns through the process and their understanding. From the time a couple hears the news of the pregnancy to seeing their child getting older, every phase of their life is always learning and, on every step, you understand and learn something new and important about life. Parenting is not easy; you sometimes have to dig deep into your kids’ heart to understand him/her. It’s not always parents who teach something to their kids, sometimes, kids also teach some important lessons to their parents. (Recommended Read: Arpita Khan Sharma And Aayush Sharma Pick A Unique Name For Their Newborn Daughter, It Means Miracle)

Ajay Devgn and Kajol are not just a power couple, they are one of the most doting parents to their two lovely kids, Nysa Devgan and Yug Devgn. Ajay is a complete family man, who loves to spend time with his family and is very protective of his kids. On the other hand, Kajol is very bubbly and pampers her two kids and loves to spend time with them. The awesome foursome tries to stay away from rumours and speculations and has beautifully managed to doge any unwanted attention on them. Recently, Kajol appeared on Kareena Kapoor Khan’s radio chat show, What Women Want and revealed some interesting details about parenting that she learnt from her son, Yug.

Kajol revealed one important parenting lesson that she learnt from her 9-year-old son, Yug Devgn that ‘really stuck with’ her. She was quoted as saying, “I was firing Nysa for not sitting with us. There was a Mata Ki Chowki at home, and I was like, ‘Nysa, come and sit with us. We are sitting here, why are you sitting at the table?’ She said, ‘Mumma, I really don’t want to.’ I really got angry and I said, ‘Come here and sit down!’ So, after she came, sat and left, my son turned around, sat in my lap quietly and told me, ‘You know, mom, you shouldn’t fire her for telling the truth.’”

Through the process of learning, parents also learn something from their kids and Yug’s advice has a big impact on Kajol and has stayed with her. Kajol was impressed by his advice and told Kareena that, “I felt like, oh my God, that was such a….ulte haath ka thappad apne bachche ne maar diya mujhe (My own son gave me a backhanded slap)! It was amazing advice.”

Kajol also revealed the other things that she has imbibed from her kids, Yug and Nysa and stated, “I am definitely picking up their habits in music, no two ways about it. Also, selfies and what looks good on Instagram and what is cool on Instagram. You can’t put everything up and all that.” (Suggested Read: Arpita Khan Sharma and Aayush Sharma Welcome Their Second Child, Salman Khan Becomes Mamu Again)

Kajol further revealed that her 16-years-old daughter, Nysa is very critical about her Instagram account and always suggests changes to her. Kajol shared, “She looks at my Instagram and she is like, ‘What is this nonsense? Have you seen Sonam Kapoor’s Instagram?’ I was like, ‘What do you mean?’ She said, ‘Just look at how symmetrical and aesthetic everything is.’ So yeah, she gives me tips on social media and the lingo. Of course, I am really bad at that, so I am not even getting there or trying. I’m just like, ‘Stop there only. I will just make do with Webster’s English Dictionary.’”

Ajay is very protective about his daughter, Nysa Devgan and had once gone on record and requested all the shutterbugs to stay away from his daughter. During the conversation with Kareena Kapoor Khan, Kajol also revealed that her daughter will never go to her dad for love advice. She stated that she will come to her for love advice but not discuss 'boyfriend matters' with her father as he will be ready with his shotgun saying, 'Where is he? Where is he?' Kajol also shared that her son, Yug will definitely go to her father, Ajay as he thinks he is cool, and they often discuss 'guy' stuff.

In an interview with the Hindustan Times, Ajay Devgn had talked about how his daughter, Nysa Devgan always gets trolled and had shared, "She is just a 14-year-old and I feel, at times, people forget that and talk rubbish. She was wearing such a long shirt and she was also wearing shorts. Now because of the length of the shirt, her shorts weren't visible and the kid got trolled for that. I don't know what kind of people these are and because of them, we are paying the price. I request the paparazzi to at least leave the children alone. Why are they paying the price for their famous parents? I don't think any child is okay with paparazzi. They want their space. They want to not dress up every time they step out, so it's very sad when such things happen." (Must Read: Karan Patel Expresses The 'Surreal' Feeling Of Becoming A Father, Wants To Be The 'Best Dad' To Mehr)

Kajol and Ajay Devgn are undoubtedly one of the most doting parents of Bollywood!