Bollywood actor Jeetendra, turned 77 yesterday on April 07, 2019. In a video from his birthday bash, Jeetendra and his wife, Shobha Kapoor can be seen dancing to the hit Hindi song, Jawani Jaaneman. Ravi Kapoor, better known as Jeetendra, turned 77 yesterday on April 07, 2019. Also known as 'Jumping Jack of Bollywood', Jeetendra was a superstar of his days, and currently he serves as the chairman of Balaji Telefilms, Balaji Motion Pictures and ALT Entertainment. He is married to Shobha Kapoor and has two children- Ekta Kapoor and Tusshar Kapoor. (You May Like: Priyanka Chopra Jonas Makes Nick Jonas Dance To Govinda's 'Meri Pant Bhi Sexy', Video Inside) 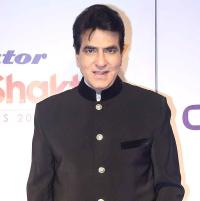 One such video has been shared by Jeetu ji's daughter, Ekta Kapoor. In the video, Jeetendra and his wife, Shobha Kapoor can be seen dancing to the hit Hindi song, Jawani Jaaneman from Amitabh Bachchan’s Namakharam (1982). The two grooved to the song hand-in-hand. While Jeetu ji sported a black suit, Shobha Kapoor donned a purple salwar suit, with a gajra ornamenting her hair. Ekta Kapoor captioned the following video as, "Happy Bday!! JAI MATA DI.... parents r GODS ON EARTH! May u live my years too! Happie bday papa." Take a look:

Ekta Kapoor also shared another picture in which we can spot television celebrities like Anita Hassanandini, Krystle D’Souza, Mona Singh, among others. Ekta captioned the pic as, "No filter required for this pic! #freindslikefamily." 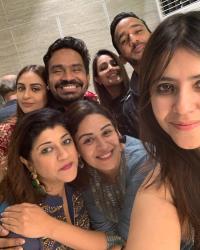 She also shared a video in which Jeetendra and Shobha can be seen enjoying song, Saamne Ye Kaun Aaya along with Mona Singh. her caption for the same can be read as, "Killaaaa moves sitting!!!#family #freindslikefamily."

Actress Mona Singh who was also present at Jeetendra's 77th birthday celebrations wished Jeetu ji by sharing the following pictures on Instagram and sweetly captioning it as, "Happy birthday Jeetu uncle may u always have that shining smile. Thank u @shobha9168 for such a lovely evening."

Krystle D' Souza shared the following picture and her birthday wish for Jeetu ji could be read as, "Happy birthday Jeetu Uncle !! Such fan-girl moments I have around A LEGEND like him." (Suggested Read: Roshni Chopra's Baby Sister Deeya Chopra Becomes A Mother, Excited Maasi Announces The News) 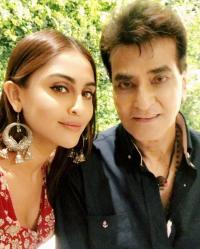 Actor, producer and writer, Mushtaq Sheikh's birthday wish for Jeetendra read as, "Happy bday Jeetu Uncle. May Allah bless you a life of happiness and love. You are an amazing soul, someone who inspires goodness and humility around you! Stay intact. Love you. #happy birthday." Mushtaq shared the following picture along with his birthday wish for Jeetu ji: 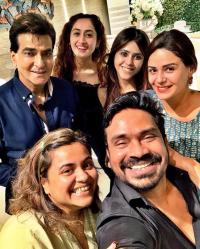 Jeetendra has been off from the camera for more than a decade now. Talking about the same, he had once shared in an interview, "I’ve done enough. I’ve shot for films everywhere from Bihar to Andhra Pradesh. I shot for Dharti Kahe Pukar Ke in a village called Maner in Bihar. I remember in Patna, in the middle of the night some college boys demanded to meet me. To wake up a guy from his sleep was a rather extreme way of showing love." (Don't Miss: Varun Dhawan's Female Fan Threatens To Harm His Ladylove, Natasha Dalal, Yells 'I Will Kill Natasha') 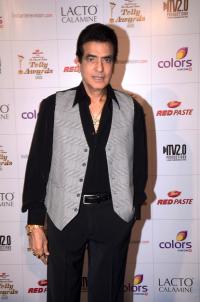 How did you like Jeetendra dancing with wife, Shobha Kapoor on his 77th birthday celebrations?