Priyanka Chopra Jonas has made a mash-up video featuring Nick Jonas wherein he can be seen dancing and in the background, Govinda's hit song,  'Meri Pant Bhi Sexy', is being played. Video inside! 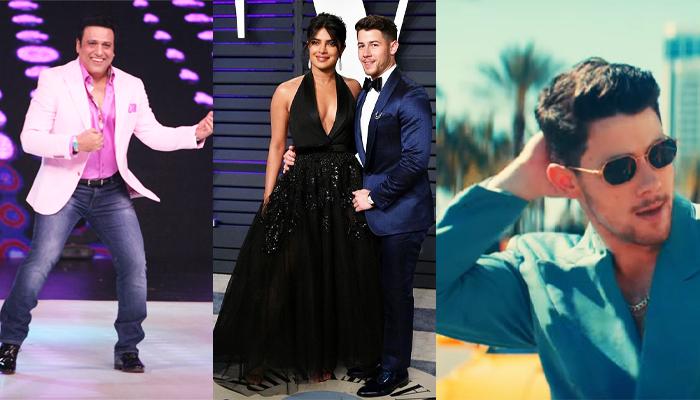 Priyanka Chopra Jonas and Nick Jonas are a global celebrity couple who are revered by billions of their fans across the globe. Their every movement and social media posts are monitored, anything and everything makes it to the headlines when it comes to our desi girl and her firangi husband. Priyanka and Nick got married in a dreamy destination wedding on December 1-2, 2018 at Umaid Bhawan Palace, Jodhpur. (You May Like: Is Preity Zinta Banned From Travelling By Ex-Boyfriend Ness Wadia's Company, GoAir? Here's The Truth)

Priyanka, as we all know, is a former Miss World and rose to fame through her acting career in Bollywood. Nick, on the other hand, is an international singer and lyricist. Nick has two brothers- Joe Jonas and Kevin Jonas, and the three have a band by the name of Jonas Brothers. Ironically, Priyanka Chopra had never been to a Jonas Brothers' concert before until recently. Pictures and videos from PeeCee's first concert from her husband's live concert went viral online. Later, Priyanka took to her Instagram handle and shared the following picture with Nick and her brothers-in-law. She captioned the pic as, "My first ever #jonasbrothers show. And it was incredible!!! I’m so proud of these guys!! #Family."

Priyanka Chopra Jonas never fails to showcase her love for Nick Jonas on social media and the Quantico star regularly posts adorable pictures and videos with hubby, Nick Jonas. Recently, Priyanka took to her Instagram stories to share a mash-up video of Nick's video song, Cool alongside Govinda's hit number, Meri Pant Bhi Sexy. The catchy mash-up video features Nick Jonas' Cool video song wherein he can be seen dancing in the streets and in the background, Govinda's hit 90s song is being played. Take a look at how Priyanka Chopra Jonas made Nick Jonas dance to Govinda's Meri Pant Bhi Sexy in her own catchy manner:

Another video of Priyanka Chopra Jonas which had gone viral on social media was from her visit to the Jonas Brothers' concert. The video, which seems to be from the backstage of the concert, shows Priyanka in splits and while climbing down the stairs, she almost topples, and hubby, Nick saves her like a protective husband. Take a look:

Priyanka and Nick were reportedly heading for divorce recently. Later, it turned out to be a fake piece of news. An article in the OK! magazine had claimed the same. A source had shared with the magazine, “They’ve been fighting about everything – work, partying, spending time together. The bottom line is that Nick and Priyanka rushed into things… and now they’re paying the price. Their marriage is hanging by a thread. There are whispers that Nick and Priyanka got married so quickly they didn’t take the time to draw up a prenup. No one would put it past her to make things difficult for Nick should they divorce." (Must Read: Anushka Sharma And Virat Kohli Chill With AB de Villiers And His Family Amidst IPL Matches)

It was later reported that Priyanka and Nick are going to sue the magazine for publishing such stories. Priyanka's representative had said, "Once she makes up her mind to deal with negative rumour-mongering, nothing can stop her. Priyanka will let loose her legal team on this news-manufacturing tabloid and ensure they get to their knees."

Rumours of Priyanka's pregnancy was also doing rounds recently. But her mother, Madhu Chopra had dismissed all pregnancy rumours and had shared with Mid-Day, “It was a bad angle. The outfit was nice. She looked like that only in some pictures, the rest were fine. Blame it on the camera angle!" A few days later, Priyanka was spotted visiting the hospital with her mother, which further ignited the pregnancy speculations. When asked Madhu Chopra about the same, the star mommy retorted to SpotboyE, “We had gone there to see a very unwell relative.”

In another interview, Madhu ji had also shared how her star daughter had reacted to the pregnancy rumours, “When I spoke to Priyanka on the phone, she told me that she was tired and hence, had a slumped posture. I told her what people were saying, and she simply said, 'Mamma, give me a break!'" (Don't Miss: Srishty Rode Posts A Heartfelt Birthday Wish For Her 'Crazy Boy', Rohit Suchanti On His Birthday)

Priyanka Chopra Jonas made Nick Jonas dance to Govinda's Meri Pant Bhi Sexy. Have you made your husband do any such thing? Share your stories with us!