Left Right Left actress, Deeya Chopra tied the knot with Ritchie Mehta in 2016, and the couple has now become parents to a baby boy. Excited newbie maasi shares the news!

Left Right Left, Mann Ki Awaaz Pratigya and Mrs. Kaushik Ki Paanch Bahuein fame actress, Deeya Chopra is on cloud nine! Deeya tied the knot with Ritchie Mehta in 2016, and the couple has now become parents to a baby boy. Yes, that’s exactly what you read! After enjoying their doubles' life for almost two years, they decided to take it to the next level and embrace parenthood. This is their first baby together. (You May Also Like: Divyanka Tripathi Dahiya Reveals Secrets Behind Her Drastic Weight Loss, Shares Diet-Fitness Routine)

Announcing the good news of her pregnancy, Deeya had taken to her official Instagram handle and shared a lovely picture from her pregnancy shoot with Ritchie and the baby bump. Deeya had captioned the post as, “2019 I’m ready for you!” Here’s the snap she had posted:

And now, Deeya’s sister, Roshni Chopra has taken to her Instagram to announce the arrival of the new entrant in their family. Well, the maasi hasn’t revealed much but expressed her happiness on being promoted to another position. Roshni shared the following picture and captioned it as, "When baby sisters grow up and give you the best present ever! I love you @deeya09thank you for making me a Masi today! Best feeling ever." (Also Read: Srishty Rode Posts A Heartfelt Birthday Wish For Her 'Crazy Boy', Rohit Suchanti On His Birthday)

Recently, Deeya had a lovely and fun-filled baby shower party. She had shared a few clicks and had written, "About time i made a appearance with the bump i think :) Thankyou @kavitatulsiani @mtulsiani @ritchiemehta for all the love! Mama is almost ready!!"

Soon after this post, she had shared another in which there was a cake and atop that it was written, “It’s a baby boy.” The early announcement the gender of the baby, led to a lot of confusion. A lot of her fans and friends thought she has delivered, but the actress clarified in one of the comments that read, "Thanks everyone! Im due next month though hahah this post makes it feel like its happened already though." (Checkout: Is Preity Zinta Banned From Travelling By Ex-Boyfriend Ness Wadia's Company, GoAir? Here's The Truth)

On March 30, 2019, Deeya had posted a beautiful picture of her baby bump, and along with it she penned her deep emotions which could be read as, “Pregnancy has taught me so many things and I’ve only just realised how I’ve barely been on instagram this whole time!”

She had further written, “It’s such a wonderful fully consuming feeling and in this world we live in where everyone glorifies their lives through Instagram. Pregnancy made me realise you just cannot photograph true happiness. It’s a feeling not a photo!” She had concluded the note with, “Alright baby Mehta spring is here and that means your time is nearly up! Cannot wait!” (Also Check: Bigg Boss 10 Contestant Lokesh Kumari's New Avatar, You Wouldn't Believe She is The Same)

Revealing her love story, in a throwback interview with TellyChakkar.com, Deeya's elder sister, Roshini Chopra talked about her brother-in-law and had revealed, “Ritchie is from London and proposed Deeya in Delhi today (10 April) in the most romantic way. He arranged for more than 500 white roses for her and also made a scrapbook of their moments so far. The family is delighted with the match and we are throwing a party this Wednesday (13 April) for close friends and family in Delhi as Ritchie's mother has come from England.”

Heartiest congratulations to the newbie parents and of course, the excited maasi, Roshni! 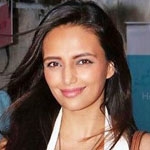