A mere glimpse at Janhvi Kapoor will make you say that she is an exact copy of her mother, Sridevi. Recently, at an event, Janhvi recreated her mom, Sridevi's 'Chandani' look and took our breath away.

All the problems of a daughter vanishes with just a warm hug from her mother. A mother’s care, nurture, protection and guidance are what makes her daughter fight with the whole world and make her own identity. A mother always stands like an anchor in her daughter's life's stormy sea and will try to make everything normal and steady. A daughter always looks up to her mother for advice that she will need in her life, she reaches out to her mother for a warm hug when difficult situations surround her, her mother's smile makes her forget her own sorrows. (Recommended Read: Sania Mirza's Baby Sister, Anam Mirza Dazzle In A Pastel Green Lehenga At Her Sangeet Night)

Bollywood’s debutant, Janhvi Kapoor has also shared a similar bond with her late mother, Sridevi. It was the horrific night of February 24, 2018, when the entire nation was taken aback with the news of the sudden demise of the legendary actress, Sridevi. More than anyone it was her family who misses her immensely. Her daughter, Janhvi was shooting for her debut movie, Dhadak when she had heard the horrific news. But, as they say, time makes you heal your wounds, Janhvi too has learnt the hard way of living her moments without her mother by her side. Janhvi Kapoor was very close to her mother and her sudden death had left an empty space in her heart. At various occasions, we have spotted Janhvi either wearing her mother’s clothes or recreating her iconic looks. And December 10, 2019, was no different. Bollywood director, Amritpal Singh Bindra hosted a 90s Bollywood theme party and who’s and who of the fraternity was in the attendees' list. From Karan Johar reminiscing ‘Kuch Kuch Hota Hai’ look to Neha Dhupia and Angad Bedi recreating ‘Raj and Simran’s look. It was a blockbuster night and the best among them was Janhvi, who recreated her mother, Sridevi’s Chandni look and made us sing Tere Mere Hothon Pe. Here are the pictures of Janhvi from the party: 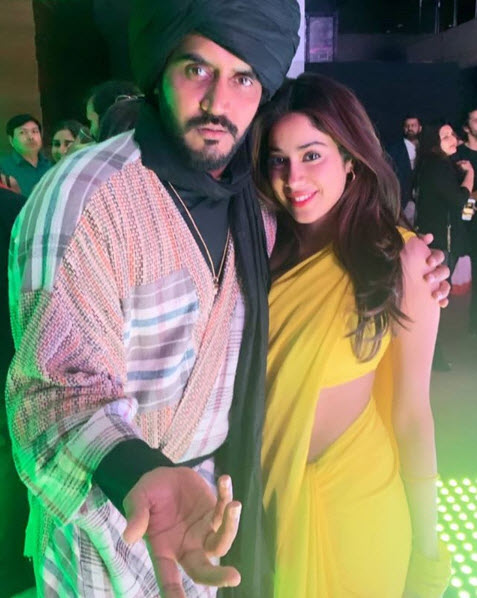 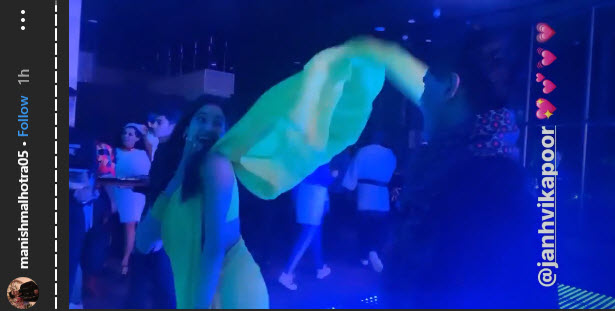 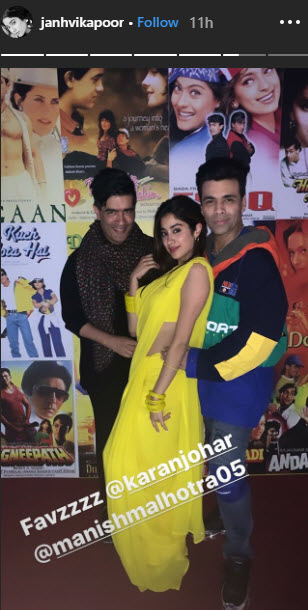 This is not the first time that Janhvi Kapoor had recreated her mother, Sridevi’s look. Janhvi’s traditional sartorial choices are an epitome of elegance and grace and it will be fair to say that she has inherited them all from her mother, Sridevi. For the 65th National Film Awards, Janhvi had worn her mother’s beautiful saree and had looked as pretty as her mother. Sridevi’s favourite designer and close friend, Manish Malhotra had mentioned on his Instagram account that Janhvi had worn Sridevi’s saree from her personal collection for this big day. Sridevi had worn this pink and white kanjeevaram saree at actor Ram Charan's wedding in 2013. (Suggested Read: Anushka Sharma's Second Anniversary Wish For Hubby, Virat Kohli Is All About 'Tujhme Rab Dikhta Hai') 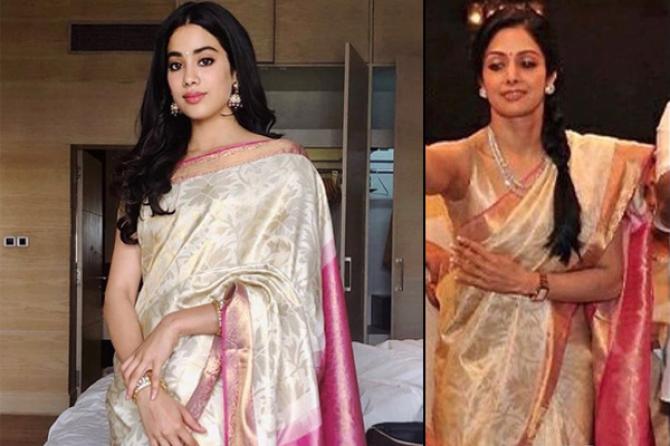 On the occasion of Diwali 2019, Janhvi Kapoor had taken a style lesson from her mother's fashion book. She had worn a white saree and had looked like an exact carbon copy of her mother. The Dhadak actress had donned a white Manish Malhotra saree for a Diwali bash and had teamed it with a strappy blouse. She had kept her look subtle with statement jhumkas and highlighted makeup. A mere look at Janhvi reminded us of her mother, Sridevi. 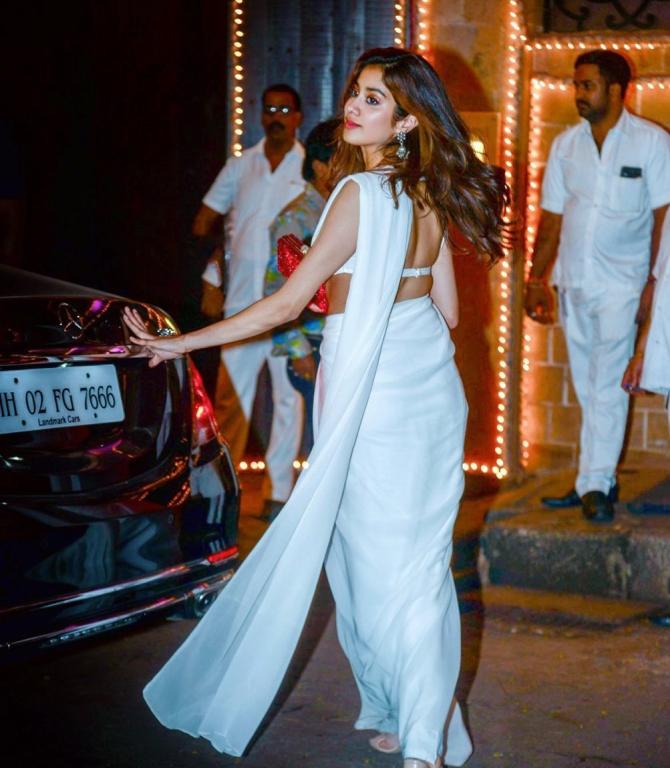 Janhvi Kapoor had once graced her mother, Sridevi’s old dupatta and had looked a lot like her. Janhvi had styled the beautiful rose printed pink dupatta with a solid white kurta, just like her mother. At the Vogue Beauty Awards 2018, Janhvi had felt weird walking the ramp without her mother’s hand to hold on to. She had gotten emotional and had expressed, “It’s a special feeling. But it’s a little weird too because I’m so used to accompanying mom and dad to these things… I always had their hands to hold. So, I don’t know whose hand to hold. I am a little nervous.” 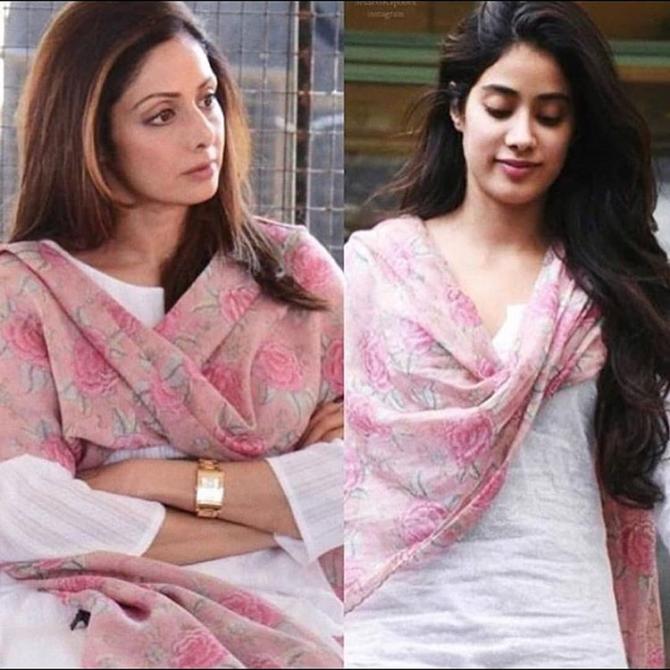 Years back, Janhvi Kapoor had written a heartfelt letter for Sridevi and had shared how proud she was of her mother. She had stated, “Dear Mom, growing up hearing about your aura, dedication, sincerity and inspirational grit to be the best and achieve the most always made me wish I was present to witness it all. Through all that you have done in your life, you have made me the proudest daughter in the world, and I love you the most. Your daughter, Janhvi.” In an interview with the Vogue magazine post her mother, Sridevi’s demise, Janhvi had talked about coping with the big loss which has left an unfilled gap in her heart. She had said, “The family has come together. It’s made us feel safe and secure. Even for papa (Boney Kapoor), it’s a source of comfort. It has definitely tied us together. We’ve lost mum, and I don’t think that’s a loss any of us will ever get over”. She had also talked about her then-upcoming movie, Dhadak and how she wants her parents and especially her late mother to be proud of her. She had said, “I am so proud of my parents. I need to make them as proud of me. That has always been my motivation. I want mine to be ‘the debut’. But it comes from an honest and sincere place. Mum always told me, it’s not about the kind of role or movie you do; you need to make an impression- that’s an actor’s job. She never encouraged jealousy or frustration. We’re capable of being happy for others.” (Must Read: Pregnant Kalki Koechlin's Latest Picture Sitting On Her Partner, Guy Hershberg's Lap Is All Hearts) We loved Janhvi Kapoor’s look at the party! What do you think?