On December 5, 2019, Arjun Kapoor and Kriti Sanon hosted a special screening of their movie, 'Panipat'. It was a delight to watch Arjun striking a perfect pose with his sister, Janhvi Kapoor.

We always say that a child’s behaviour and nature somewhat get affected by the kind of siblings he/she has. A bond between a brother and sister doesn’t need any kind of special mention, the name is enough for everyone to guess that the bond is filled with love, care, support, laugh, sarcasm etc. A relationship of a brother with his sister is like that of Tom and Jerry, he will be fighting with his sister, will make fun of her but will secretly be protecting her from every single trouble. Brothers and sisters are the lifelines of the house, they bring energy in the house and make it a better place to live. (Recommended Read: Esha Deol's Daughter, Radhya Takhtani Helps Her Mommy In Decorating The Christmas Tree)

Bollywood is also an exemplar of such brother-sister bonds, but our favourite will always be Arjun Kapoor’s bond with his real-sister, Anshula Kapoor and half-sisters, Janhvi Kapoor and Khushi Kapoor. On February 24, 2018, when the entire Kapoor khandaan was mourning the death of actress, Sridevi, we also saw the loving bonding of Arjun with his father, Boney Kapoor and was seen supporting his half-sisters, Janhvi and Khushi. He was standing like a pillar of strength with the entire family and emerged as a perfect family man. Ever since the sad demise of Sridevi, Arjun has been protecting his half-sisters and their bond has also strengthened with time.

Recently, at the special screening of Arjun Kapoor and Kriti Sanon starrer movie, Panipat, we saw a bonding moment between Arjun and Janhvi. On December 5, 2019, Janhvi came for the special screening and to support her brother, Arjun. And the brother-sister duo gave us major #SiblingGoals. Janhvi looked like a fresh breeze in a summery blue-coloured dress, her hair kept loose and she paired her dress with stilettos. On the other hand, Arjun looked dapper in a royal blue-coloured kurta and white-coloured pyjama with a printed blue-coloured handkerchief nicely kept in his pocket. Here are a few pictures and videos from the screening for you:

Arjun Kapoor and Janhvi Kapoor had made their first on-screen appearance on Karan Johar’s chat show, Koffee With Karan season 6 and proved that they are one of the coolest brother-sister duos of Bollywood. In an interview with the Mid-Day, talking about his Koffee With Karan experience alongside Janhvi, Arjun had said that when Karan had told him that this was the combination, he was pleasantly surprised, because he is the buffoon and prankster with Karan. He had thought that he will get to spend some time with Janhvi. Arjun had said that he hasn’t been able to spend time with her. In February (when Sridevi passed away) he was shooting for his movie, Namaste England. (Suggested Read: Kareena Kapoor And Manish Malhotra Are Unrecognisable In This Rare Pic From Karisma Kapoor's Mehendi) Arjun Kapoor had revealed further that he now knows Janhvi better, and the talk show was a great platform for him to spend some time with his sister and had added, “I literally entered into their lives as the whirlwind of chaos. I did my bit and whatever I could. My sister allowed to welcome them as our family, or at least put them at ease at that moment, and simplify things as much as we could by being supportive. And, then I had to disappear and go work. She had Dhadak releasing. When the trailer came out, I was not in town, and when the film was releasing, I came back a day before.” 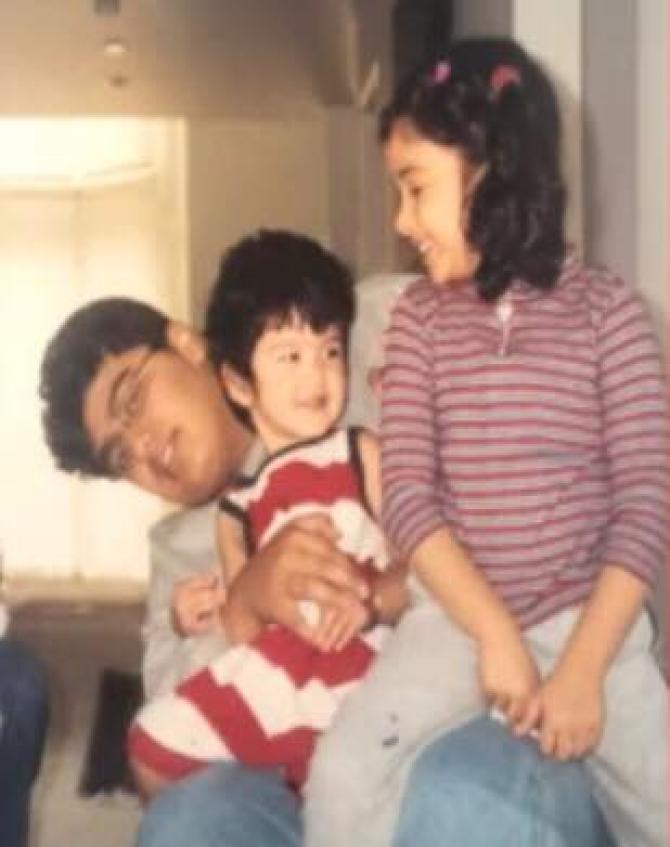 Arjun Kapoor had further added, “Now I was away for India's Most Wanted (next film) for a month-and-a-half in Nepal. So, I have also kind of been away from her and Khushi Kapoor. I've met them in between. We've had dinners at home and obviously, they spend a lot more time with Anshula Kapoor, and so with my dad (Boney Kapoor). Now that I look back, I haven't spent any time with them. I felt it was a nice way of me getting to know her.” During the same interview, Arjun Kapoor was all praises for his sister, who had made her debut with the movie, Dhadak. He had revealed further, “I did get to know her a lot better, off-camera also. She's a very sorted girl. She's sensible and funny, and also has quite a few hidden talents that came around in the show; just like how I am, a hidden gem (laughs). I think this was meant to be that we would discover each other. What Karan does is, he allows you to be in a comfortable environment and that kind of let's go your inhibitions that maybe I and she would have taken a couple of more dinners and lunches and maybe a holiday or two. Now, suddenly after spending two hours, I feel like I've known her all my life. I can only be thankful to Karan for choosing this combination.” (Must Read: Arjun Rampal And His Girlfriend, Gabriella Demetriades Twin In Black For A Night Out) We love the bond that Arjun Kapoor shares with his sister, Janhvi Kapoor! What about you?