Alia Bhatt and Shaheen Bhatt are #Sistergoals and never leave a chance to show their love for one another. Recently, Shaheen posted a grumpy picture of her sister, Alia which took our heart away!

‘Sisters before misters’, ‘She is my sister, break her heart and I will break your face’, ‘A sister is our first friend and second mother’- did you remember your naughty yet lovely sister after reading these quotes? If yes, then you surely have an amazing sister by your side. A sister will fight with you for your clothes, makeup, jewellery and whatnot but will always stand by your side like a pillar of strength in every difficult situation. She is your guide, mentor, philosopher and motivational speaker all packed in one. (Recommended Read: Mohsin Khan And Shivangi Joshi Part Ways But Continue To Fake Their Relationship For YRKKH TRPs?)

Some relationships are such that we can’t ignore the fact that how blessed we are to have them in our life. One such pure relationship is that of sisters. Whenever you are in trouble, your sister will be standing in front of you like a shield and will fight all the odds to protect you and to see you happy. Raazi actress, Alia Bhatt also shares such a close-knit bond with her sister, Shaheen Bhatt. The duo has been an inspiration to look up to for every sibling out there and their social media handle is also a proof of the same. 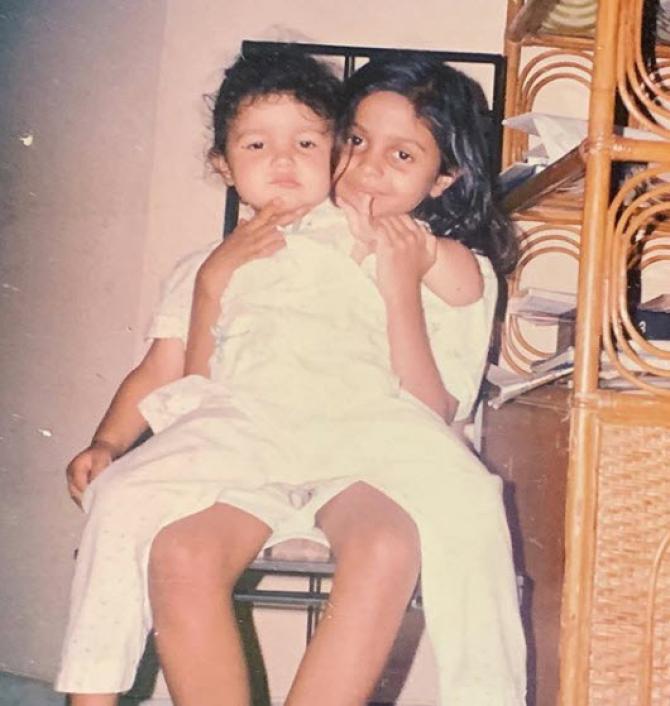 Media conferences, promotional events or chat shows, Alia Bhatt and Shaheen Bhatt never shy away from praising each other. From supporting her sister when she opened up about her depression story to apologising her for not understanding her depression, Alia has always been a pillar of strength in difficult times for her sister, Shaheen. On the other hand, Shaheen has also supported Alia for her life decisions and have always praised her for her choice of movies. Recently, Alia returned back to Mumbai after shooting for her upcoming film and her doting sister, Shaheen welcomed her by posting a black-and-white picture of her and wrote, “My happy little flower is home", atop it. 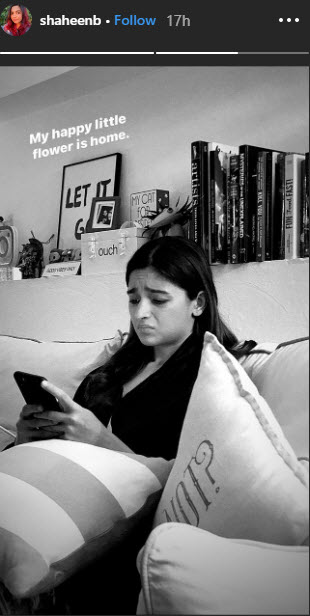 Shaheen Bhatt was fighting with depression and had launched her own book, Never Been (Un)Happier on World Mental Health Day (2018). In the book, Shaheen had penned down her experience with depression and how she fought back from it. On World Mental Health Day (October 10, 2019), Alia Bhatt had taken to her Instagram handle and had written an emotional message for her sister, Shaheen. By posting a solo picture of Shaheen, Alia had penned, “I am so so proud of you @shaheenb And of @herecomesthesunofficial. You have taken something so personal and made it a symbol of strength and empathy. No one needs to be alone as they struggle with mental health, battling their own fears and anxiety. Sometimes all you need to know that you're not alone!!! I'm here a 100%.. to start the conversation, to raise awareness and to join you on this journey, EVERY step of the way @herecomesthesunofficial #WorldMentalHealthDay (sic)." (Suggested Read: Lata Mangeshkar's Sister, Usha Mangeshkar Shares The Latest Health Update Of The 90-Year-Old Singer) 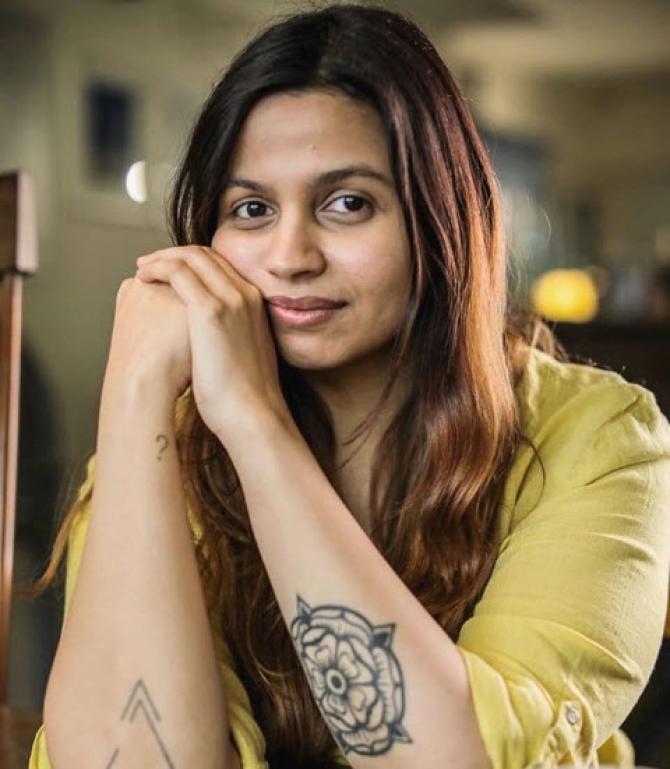 Alia Bhatt has always praised Shaheen Bhatt for coming out in open and talking about her depression story. Shaheen had written a blog for the Vogue, wherein she had talked about her depression. Her lovely sister, Alia had later posted the article on her official Twitter handle, wording it as “Shaheen, you are brilliant! My sister has battled and lived with depression since she was 12. She speaks her heart out and without any hesitation addresses the giant elephant in the room – Mental health and the LACK of our understanding & acceptance!” Alia and Shaheen are major #SisterGoals! 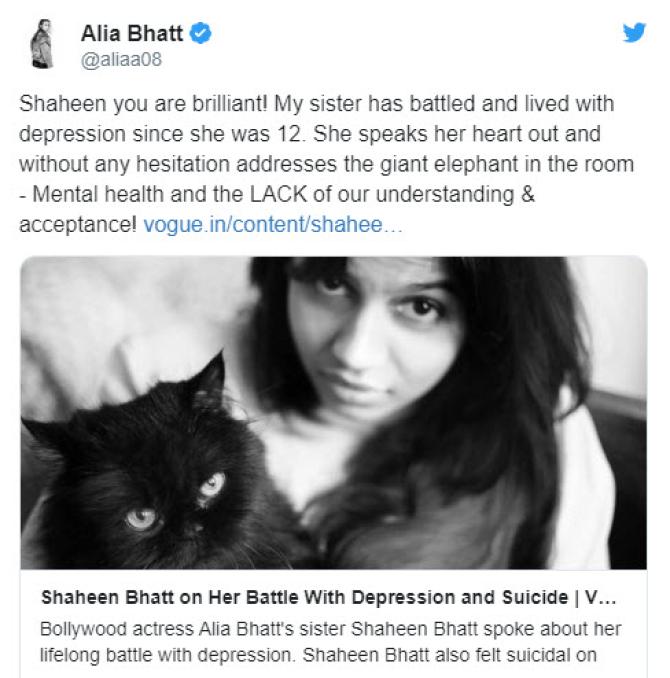 Do you know that once, Shaheen Bhatt was asked to leave the frame she was sharing with her sister, Alia Bhatt and half-sister, Pooja Bhatt because of her colour?  In an interview with Rajeev Masand, Shaheen had talked about the same and had shared how it had affected her self-worth. Shaheen had retorted, “My self-worth was definitely affected because I was at an age where the seeds of that were being sown in me. I was just trying to figure out who I was and obviously, when something like this happens to you at such an uncertain and unsure time in your life, it sorts of reinforces that and sets it in stone. So, there was a lot of unlearning that I had to do and still have to do.” (Do Read: Jay Bhanushali Proves That He Is A Doting Daddy, Bottle Feeds Daughter, Tara Jay Bhanushali) 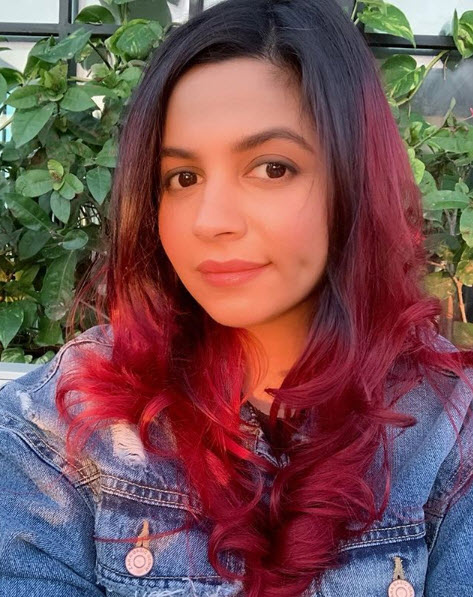 After seeing Shaheen Bhatt and Alia Bhatt's bonding, we wish to have a sister like them! 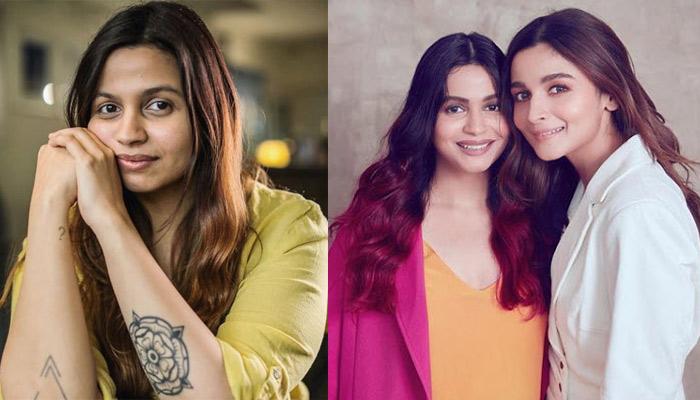